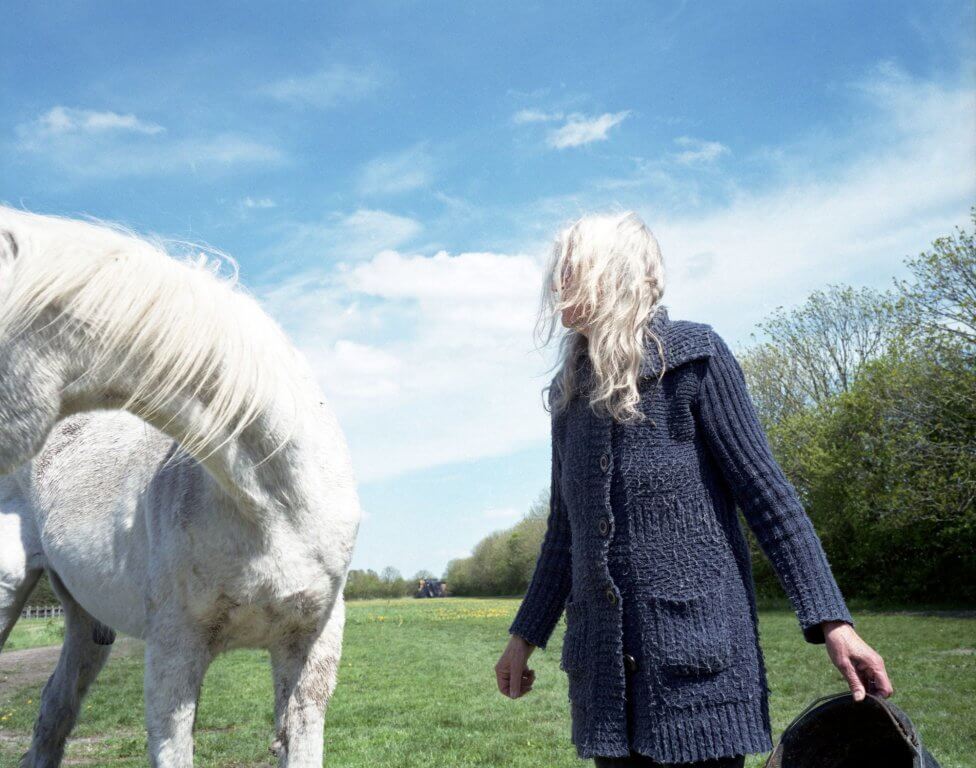 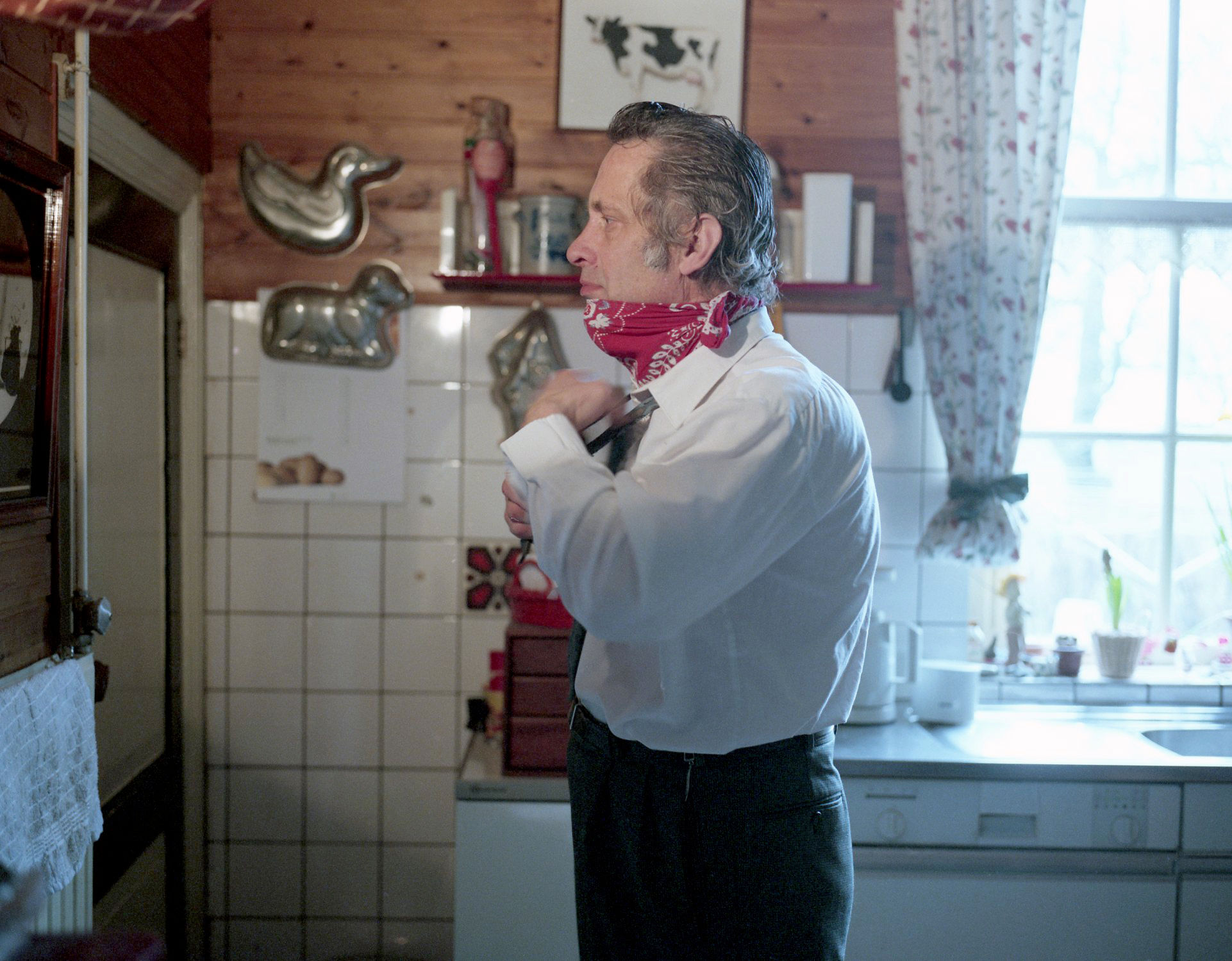 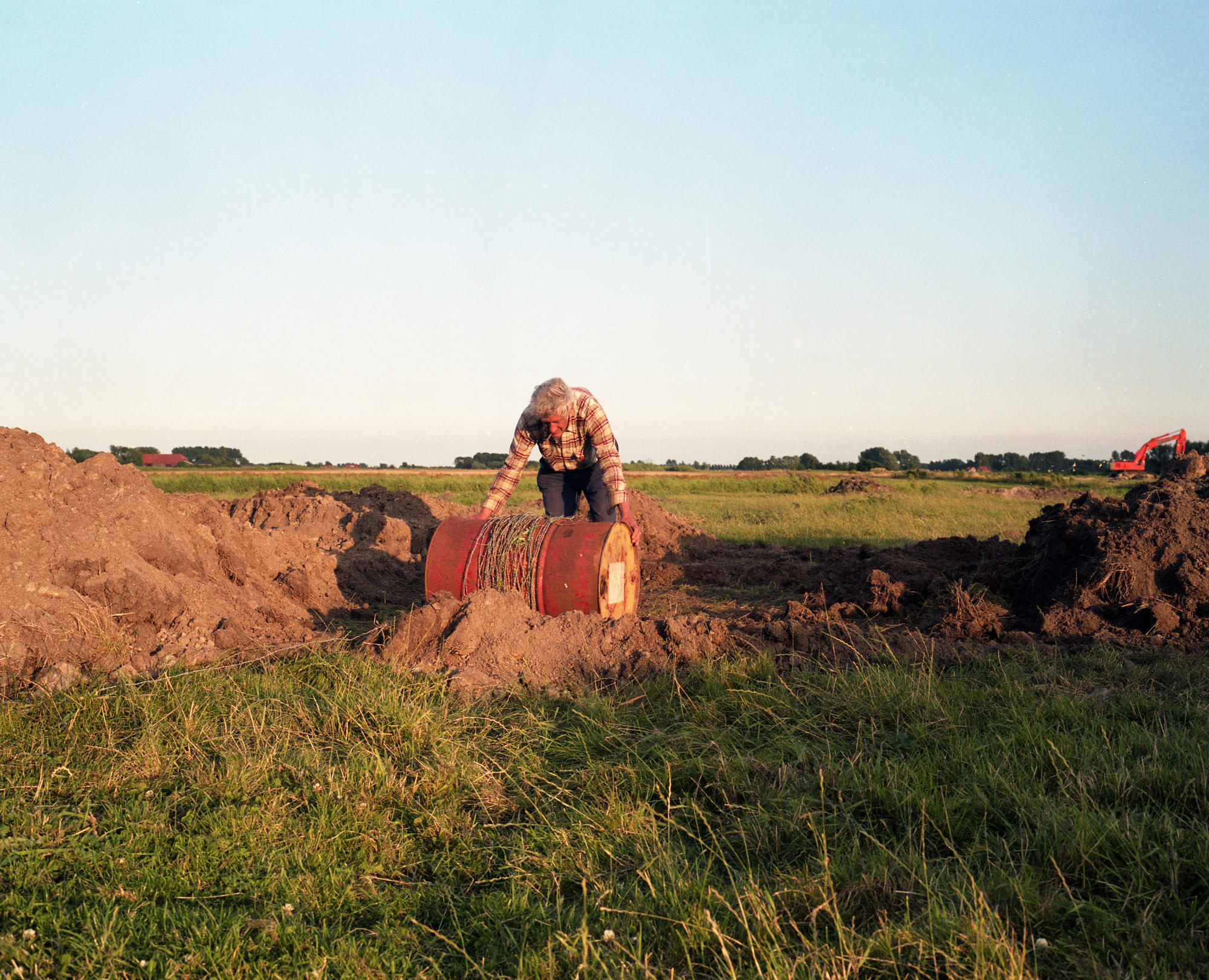 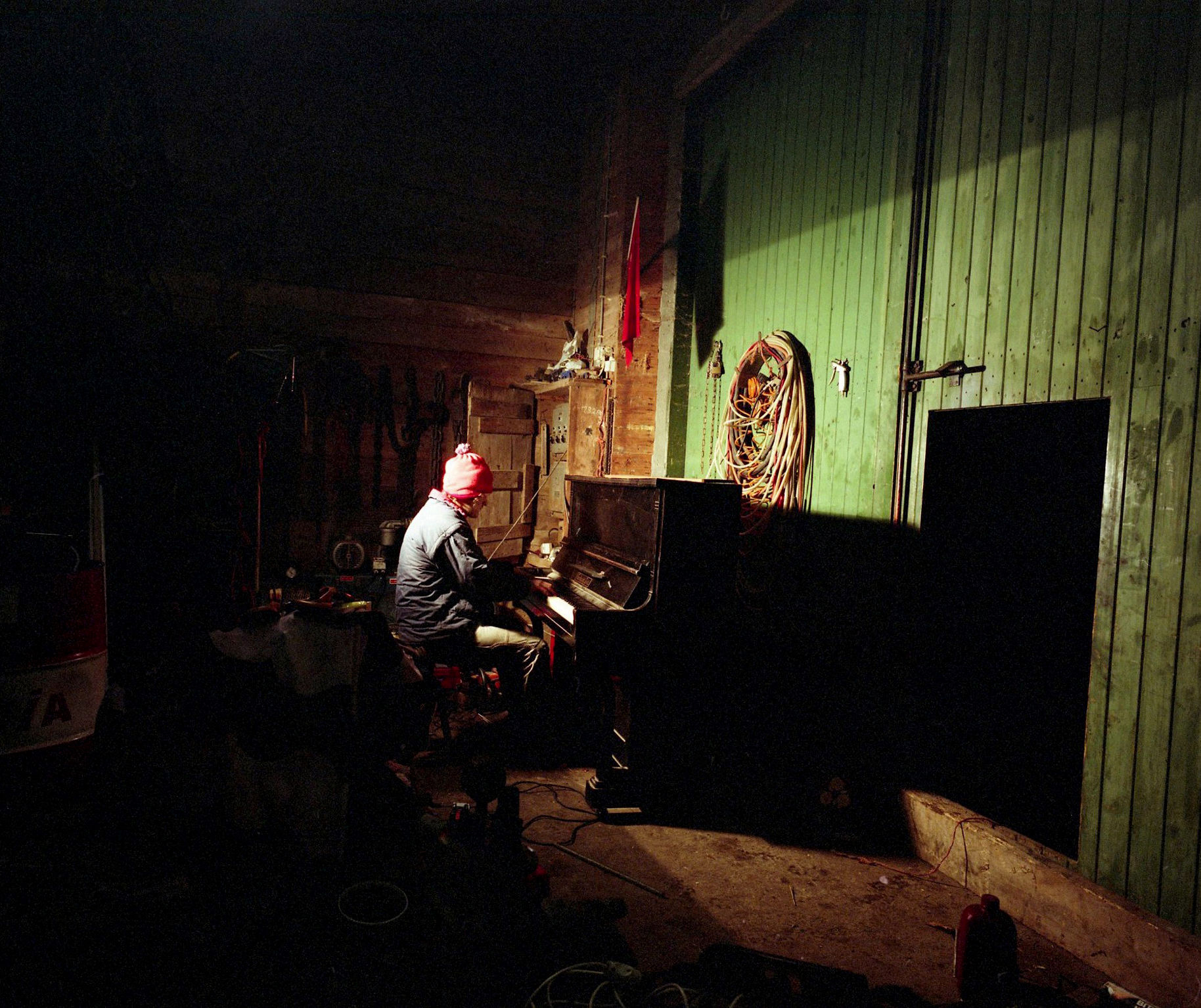 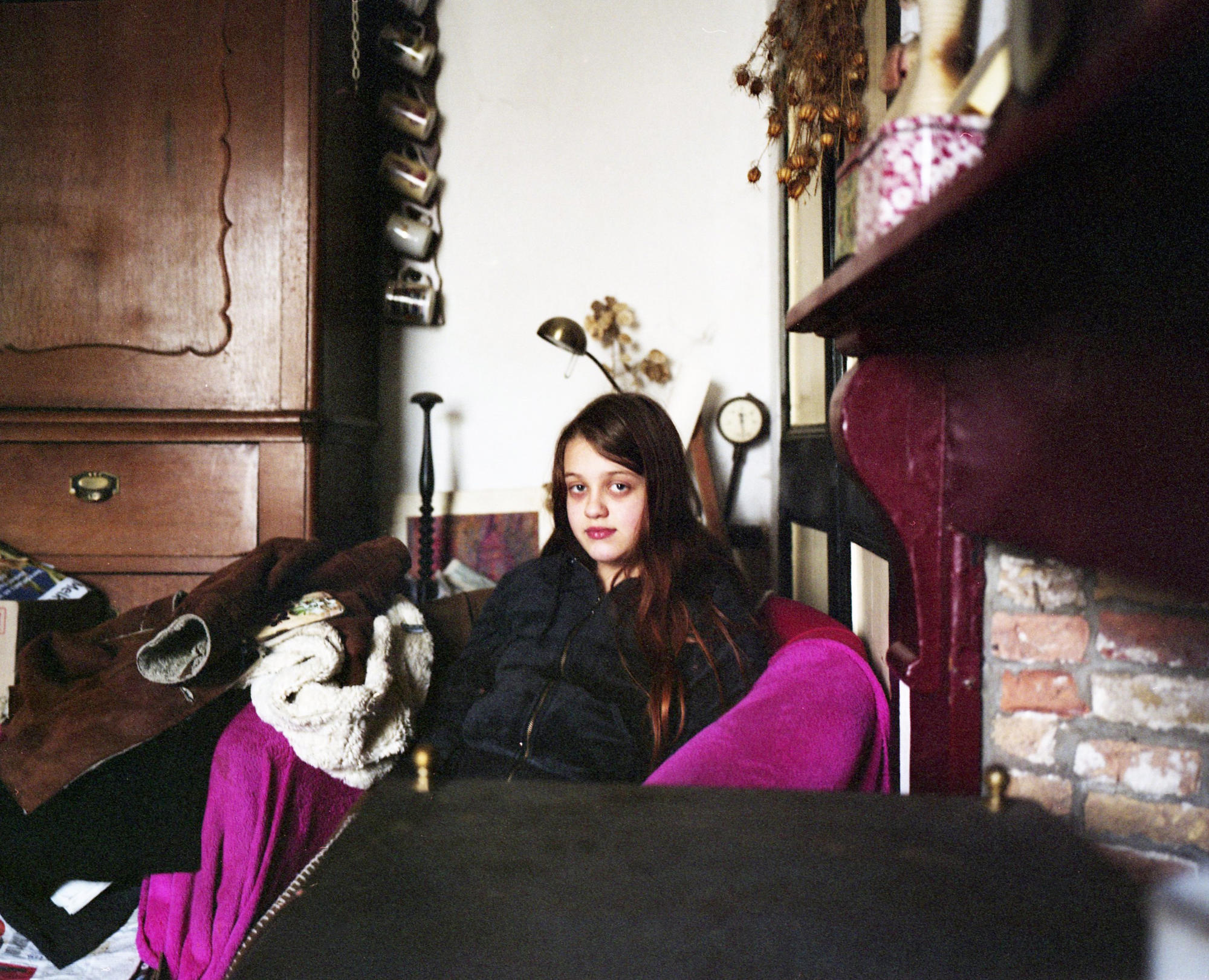 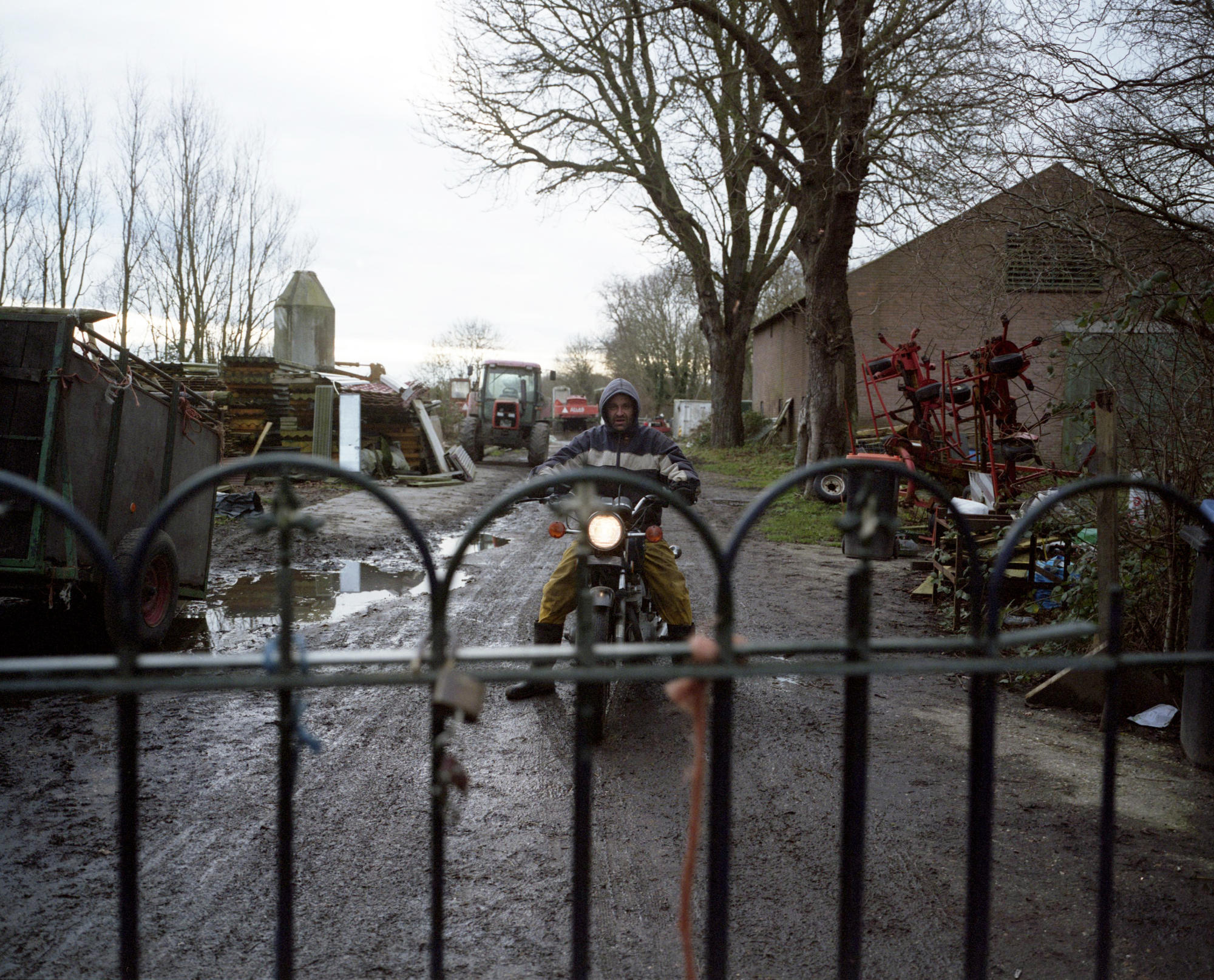 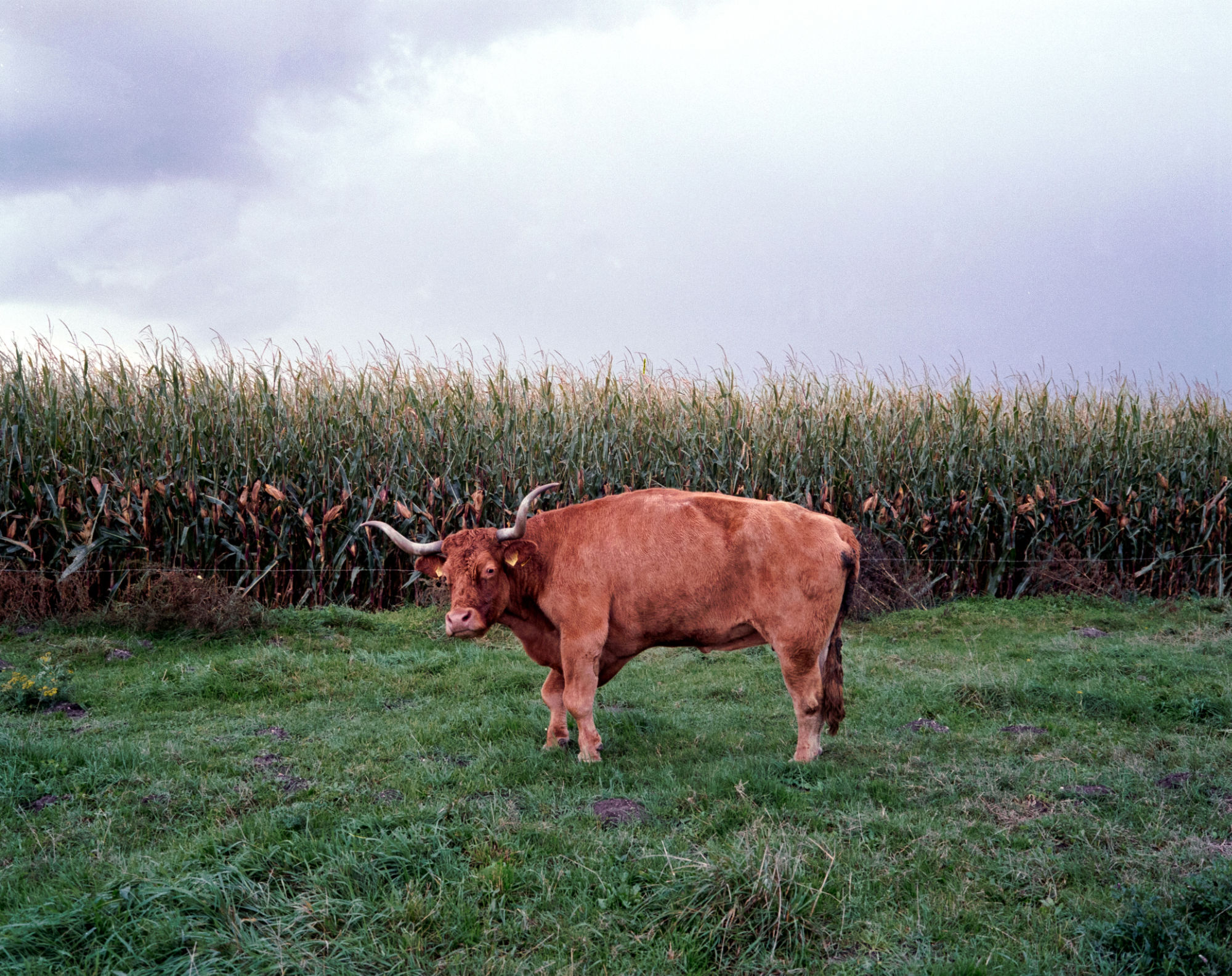 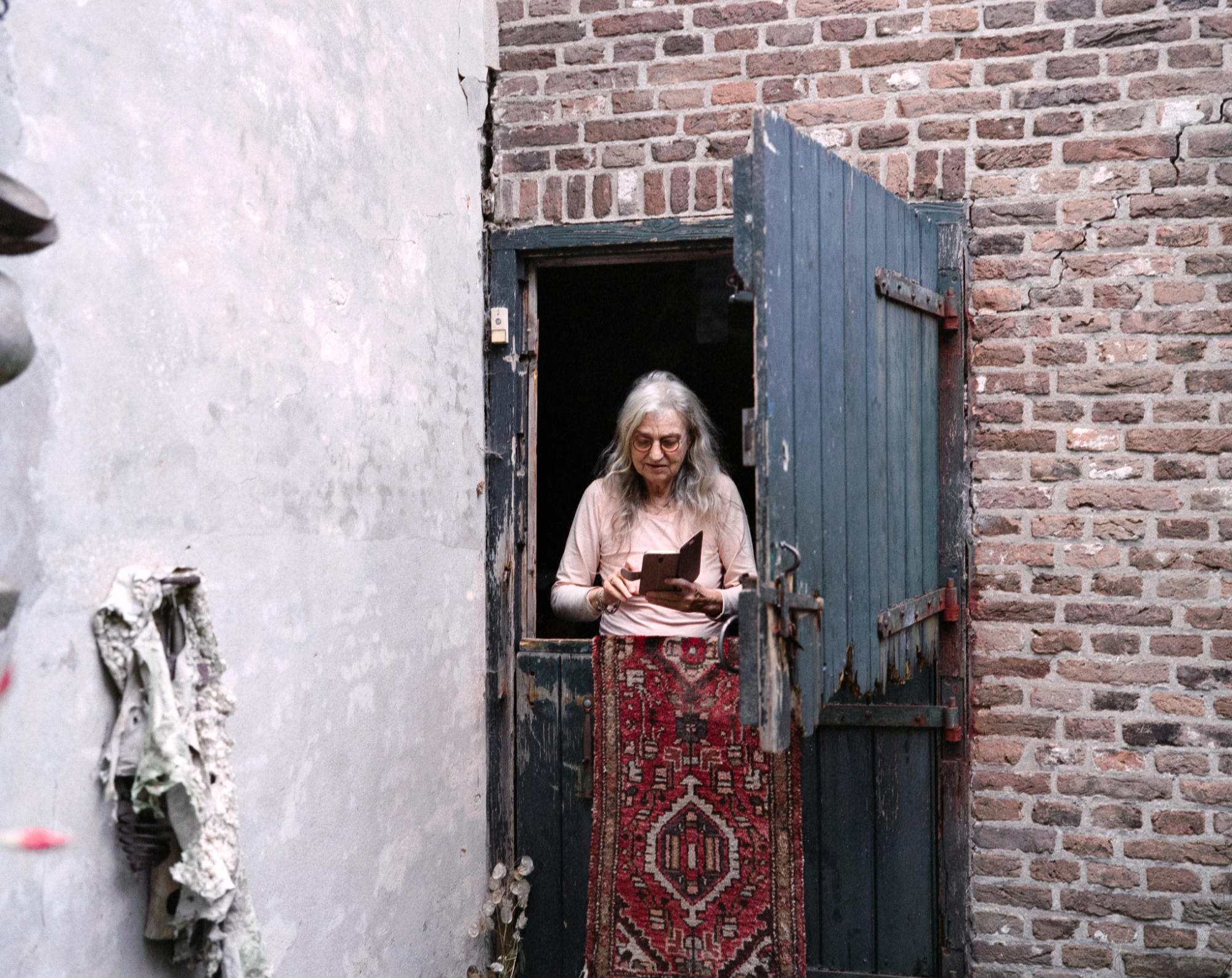 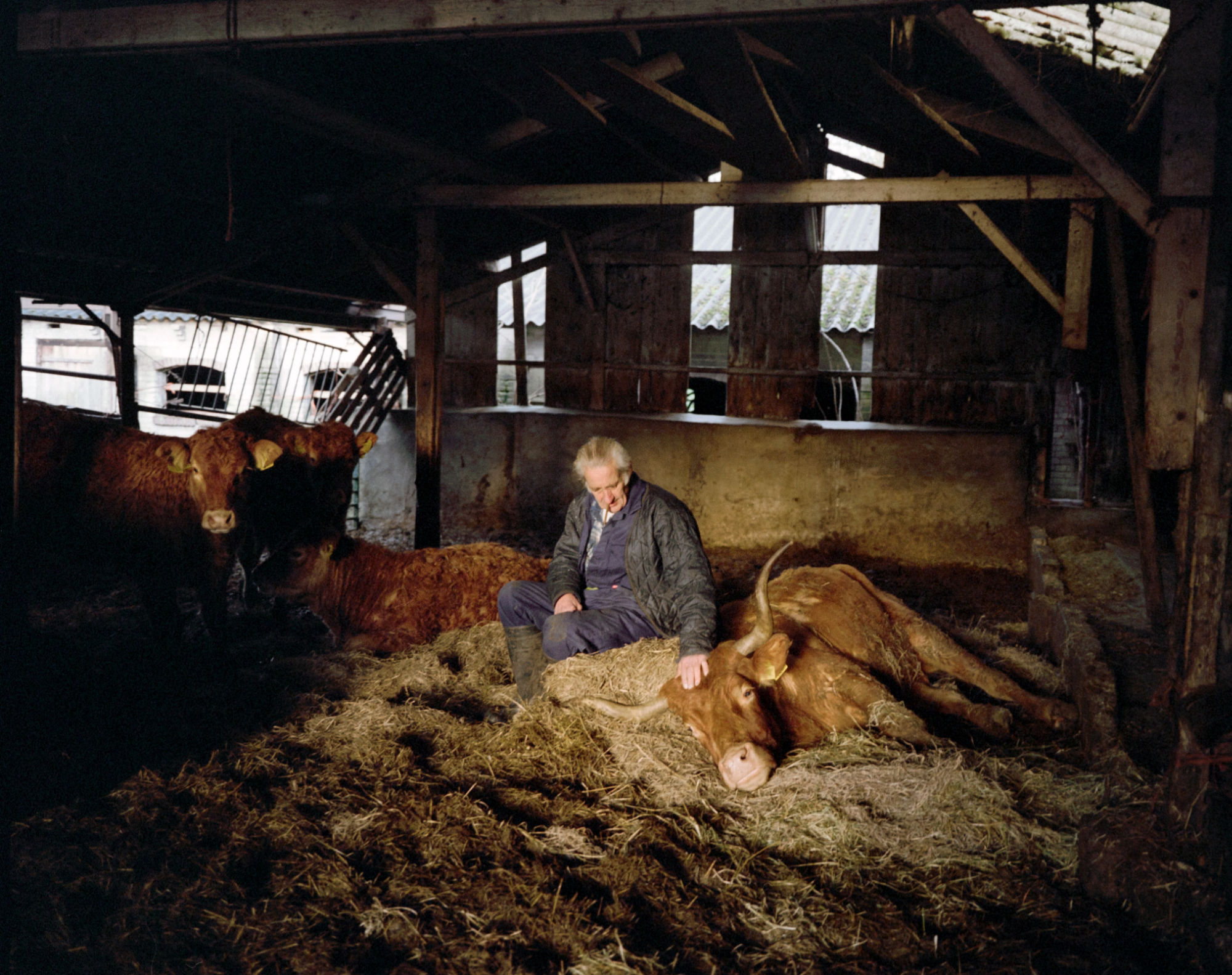 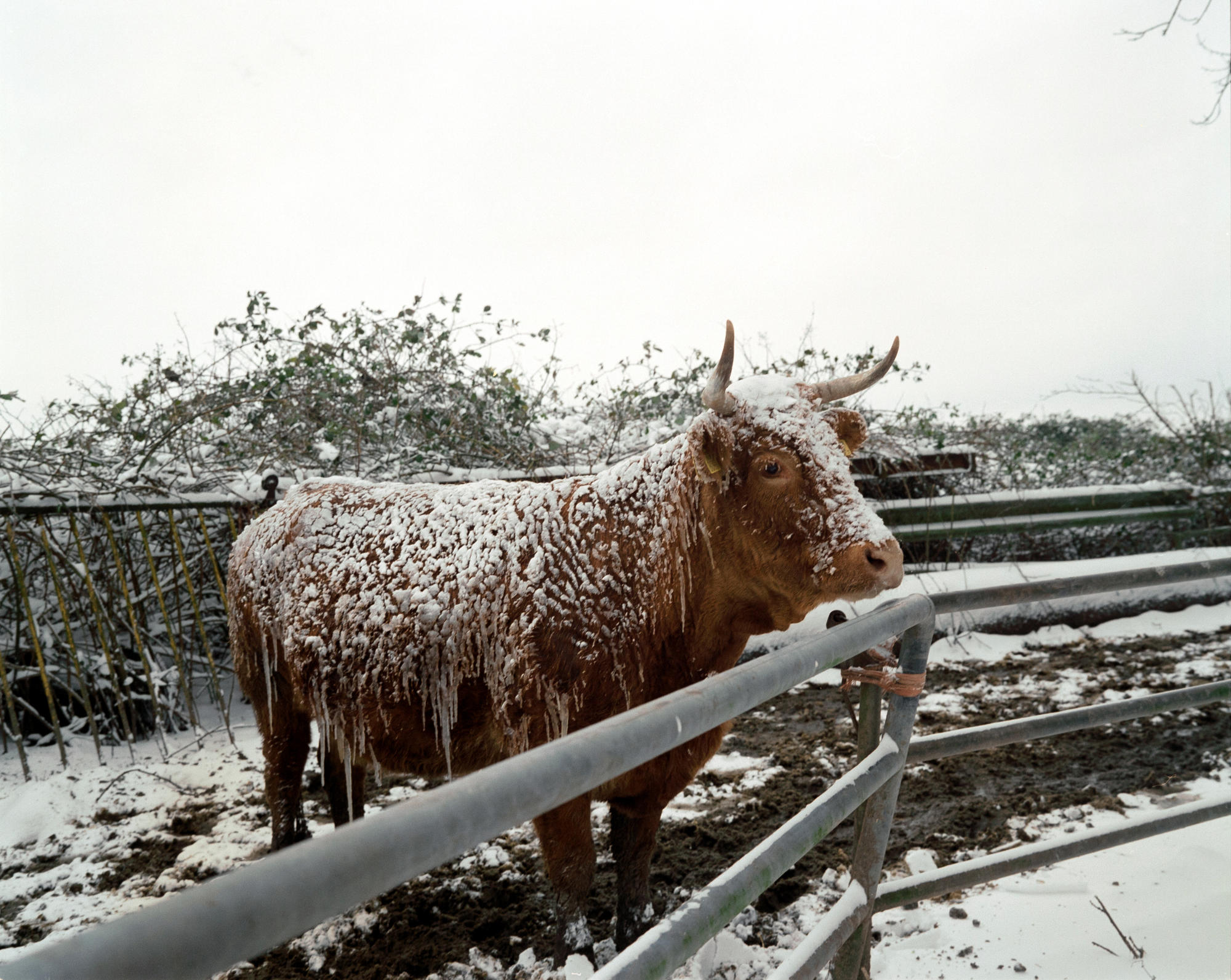 This summer, Huis Marseille is showing the work of the Dutch photographer Dirk Kome (Rockanje, 1976) as part of The beauty of the world so heavy. The exhibition Vijf lange meden spans 23 years of work and comprises honest images of family life on a farm. The cycle of the seasons, the changing connection of family members with the land, the endless coming and going of generations: with his photographs, supplemented with documents from the family archives, Kome makes the layering of time tangible.

‘You should photograph what you love,’ Koos Breukel advised Dirk Kome (Rockanje, 1976) when Kome was finding his feet as an artist at the Rietveld Academy. He took the advice to heart and gained high praise with his graduation photographs of his parents and brother on the family farm in the village of Rockanje in South Holland. In the 23 years that followed, Kome continued to return to his birthplace and work there for weeks, both as a farmhand and a photographer. Put in words this period of time is a linear abstraction, but as Kome says: ‘Nothing is synchronous; nothing waits to move until something begins, and nothing stands still just because something has stopped.’ In his photos, the passing of time is revealed by the increasing frailty of his parents and the way his brother gradually takes over the running of the farm.

Farmers’ lives are governed by the rhythm of the seasons. Within this immediate experience of time, Kome has now added new lines by introducing his family archives to the story. We see the family Bible being passed down from parent to child, its flyleaf carrying the names of all the family forbears; we see a guest book dating from the interwar years, when the property had briefly hosted a campsite; and we see the kalverschets (a sort of passport that included drawn depictions and other identifying characteristics) of the milk cow Lijn, from 1957. Kome’s forefathers have worked the property, which is ‘vijf lange meden’ (an Old-Dutch longitude, approximately 23000 sqm) in size, since 1765. ‘You don’t own the farm and the land; you have them on long-term loan from your grandchildren,’ says Kome’s father. In the peace and stillness of the farming land one can experience a sense of eternity; nevertheless, it looks like the end of this family farm is in sight. ‘My brother has no children. My sister and I went away, and our children are so removed from farming life that for them taking it over is not an option,’ writes Kome. ‘After 259 years, we’re looking at the last generation.’

Dirk Kome stuck to analogue techniques throughout this entire series. The old-fashioned craftsmanship of analogue photography reflects the character of farm work itself, and formed a constraint that Kome says he enjoys. His 120 format film rolls only have space for ten photos, but not being able to review the images means that his concentration remains unbroken. And he’s not very interested in extensive image processing: ‘Reality is beautiful enough.’

The Huis Marseille exhibition Vijf lange meden is showing, for the first time, a large selection of old and new work from Dirk Kome’s Rockanje-series. Especially for this exhibition the film-maker Jeanne van der Horst made a 15-minute film that sets some of the objects in Kome’s extensive archive against the background of the family stories. A number of physical archive documents are on display as well.

Spread across two galleries and the Garden House, the photos are hung in non-chronological order, allowing the viewer to make connections that traverse the years. In this way the sense of layered time that can be felt in Kome’s work is also reflected in its presentation. Together, the works attest to the non-romanticised beauty of country life. The photographer Dirk Kome is contributing a poignant, many-layered, and particularly Dutch perspective on generations of farm life to Huis Marseille’s summer programme, The beauty of the world so heavy.

Dirk Kome (Rockanje, 1976) studied photography at the Gerrit Rietveld Academy and the Rijksakademie in Amsterdam. He has described himself as a ‘collector of things that come together’. In his work he links that which is to that which has been, subtly allowing histories and genealogies to surface in his landscapes and portraits. In an earlier series, for instance, he photographed the descendants of people that were portrayed by Tonnis Post (1877-1930), a photographer who had depicted wealth and poverty in Groningen in the late 19th century. Kome is currently working on the project The Leftovers of New Netherland, examining the effects of Dutch colonisation of the east coast of America between 1609 and 1664 on its landscape and on the descendants of the first colonists and settlers. Kome’s work often reveals the subtleties of the process by which things are passed on from generation to generation, in which everyone is a link in a family chain.

Vijf lange meden is part of Huis Marseille’s summer programme 2022, entitled The beauty of the world so heavy, which includes the following exhibitions: