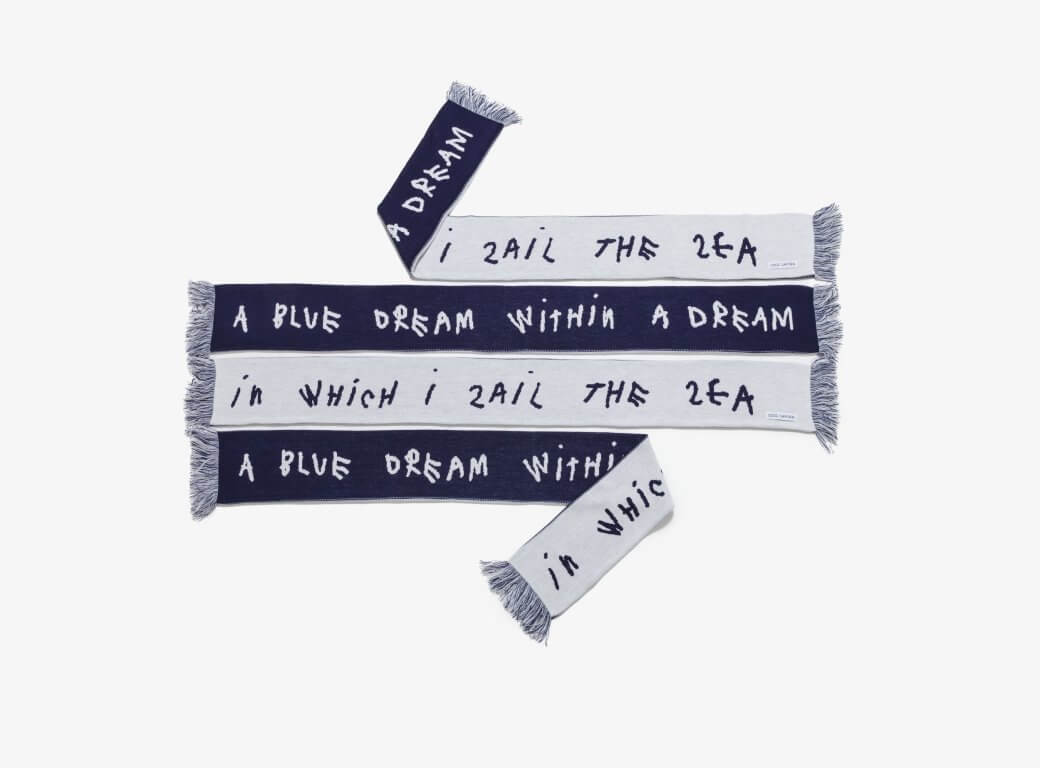 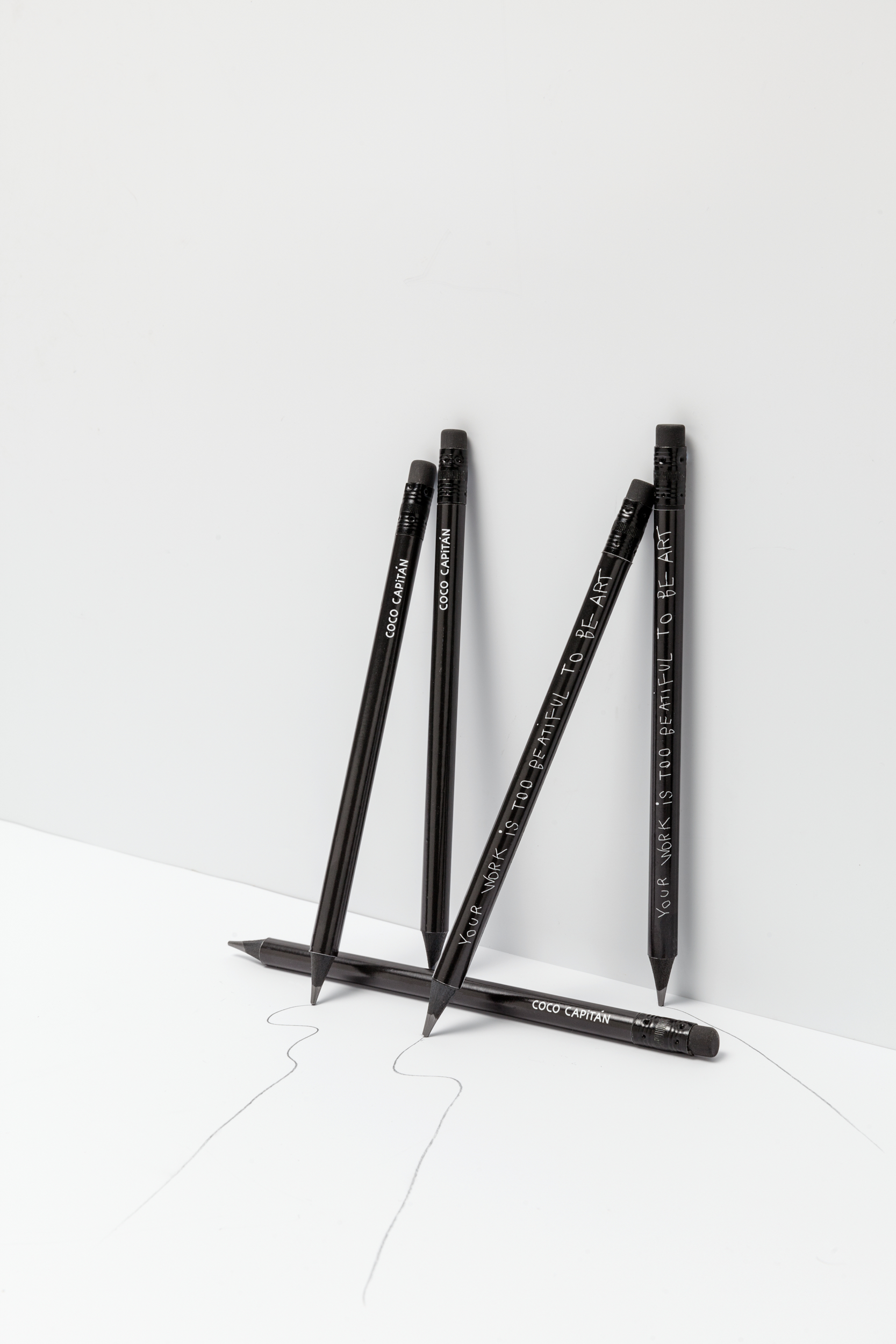 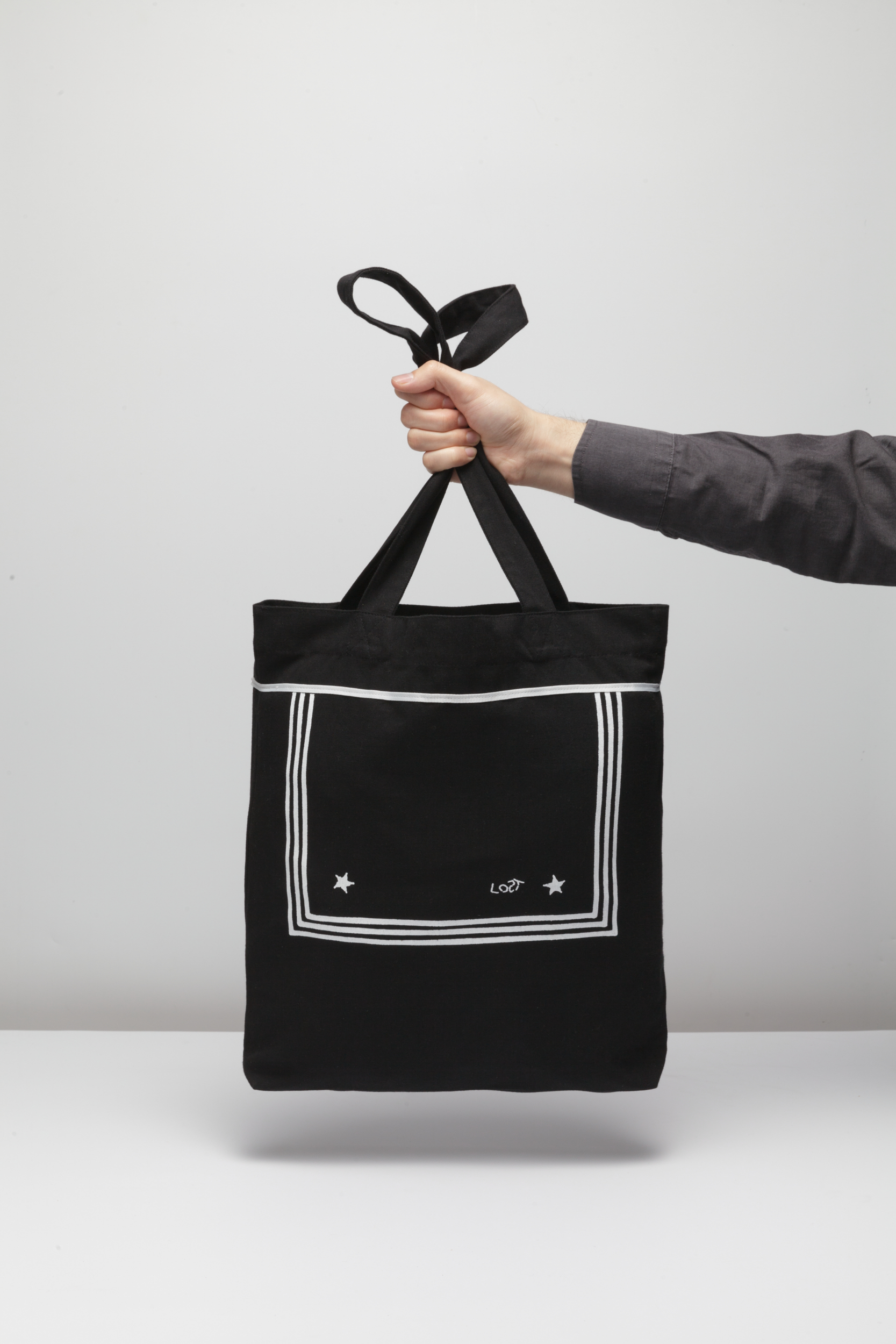 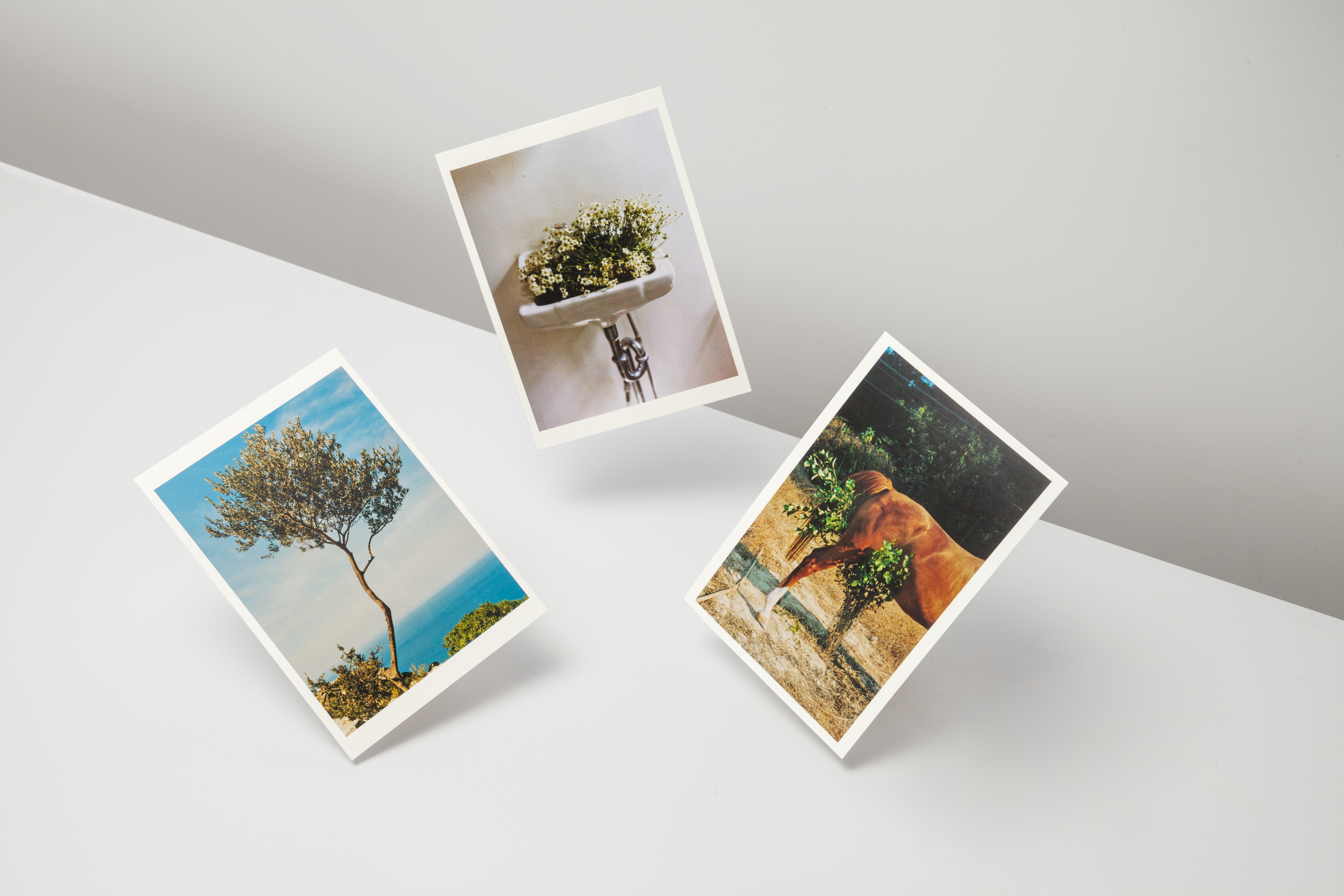 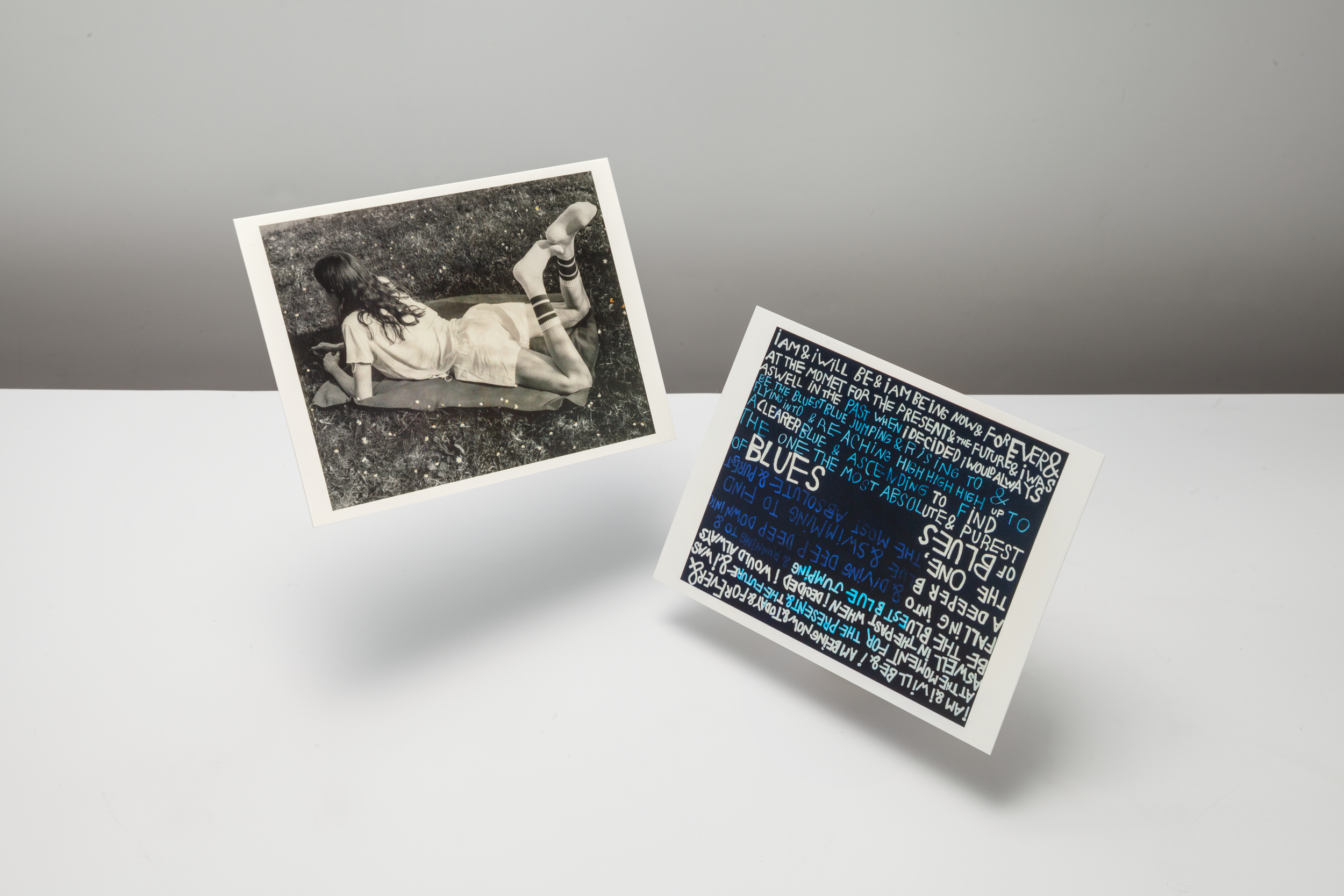 Writing is another important part of Coco Capitán’s artistic practice. Her poetic texts and aphorisms, in her characteristic handwriting and with lots of capitals, spelling mistakes and strike-throughs, are not limited to paper and books but have also appeared – thanks to a wide variety of collaborations, including with the Gucci fashion designer Alessandro Michele – in murals, on clothing, and all sorts of other objects. ‘What are we going to do with all this future?’ and ‘Common sense is not so common’ are just two examples of Capitán’s pithy reflections. ‘When considered in tandem with her writing,’ wrote Businessoffashion.com, ‘her output takes on a more culturally pertinent tone, defined by its oscillation between irony and sincerity, naïvité and knowingness, relativism and truth, optimism and doubt.’ Capitán’s musings are both authentic and culturally relevant, thereby adding a unique layer of meaning to her oeuvre, but also – and more literally – to the products she has decorated in this way. Huis Marseille has developed a pencil and a scarf bearing texts by Coco Capitán.

Products with texts by Coco Capitán:

Blue Dream Scarf
A blue scarf bearing the text:
A BLUE DREAM WITHIN A DREAM IN WHICH I SAIL THE SEA
145 x 17 cm, OEKO-TEX(C) standard 100 certified acrylic, ethically produced in Germany
€22

Available only in the museum shop and the Huis Marseille web shop.

The original printing on this black bag made of organic cotton is based on Coco Capitán’s artwork Lost II (Modified Textile with Embroidery, 2020) which is part of her contribution towards the group exhibition Infinite Identities in Huis Marseille. The artwork is based on the vintage American sailor suits that Coco Capitán collects. The lead role in the artwork – and the bag – is devoted to the special sailor collar, with a square at the back and folded edges that lie in two triangles over the shoulders to meet at the front. This square, with its triple striping, and the word ‘LOST’ flanked by two stars – embroidered by Coco Capitán – is screen-printed in white onto the bag.

‘I was thinking about those sailors in history who set out in search of new lands,’ said Coco Capitán in an interview with Another. Like those sailors, this sailorbag can accompany you to new destinations, and the outstanding quality of the material will guarantee long enjoyment of its company.

Available only from the museum shop and from the Huis Marseille web shop.

Five postcards depicting images of the artworks Coco Capitáns contributed to the group exhibition Infinite Identities are for sale in the museum shop. Two of the postcards are of the artworks Painting of Blue Sky Falling into Blue Ocean and Cristi with Sun and Daisies, and three are taken from the series Where did the Sailor get Lost?

Available only from the museum shop.

Coco Capitán (Seville, 1992) paints, photographs, draws, embroiders and writes prose. She lives in London, where she gained a Master of Fine Arts in photography at the Royal College of Fashion (University of the Arts). She works as an autonomous visual artist, but also accepts commercial assignments and works regularly with leading fashion and other brands.