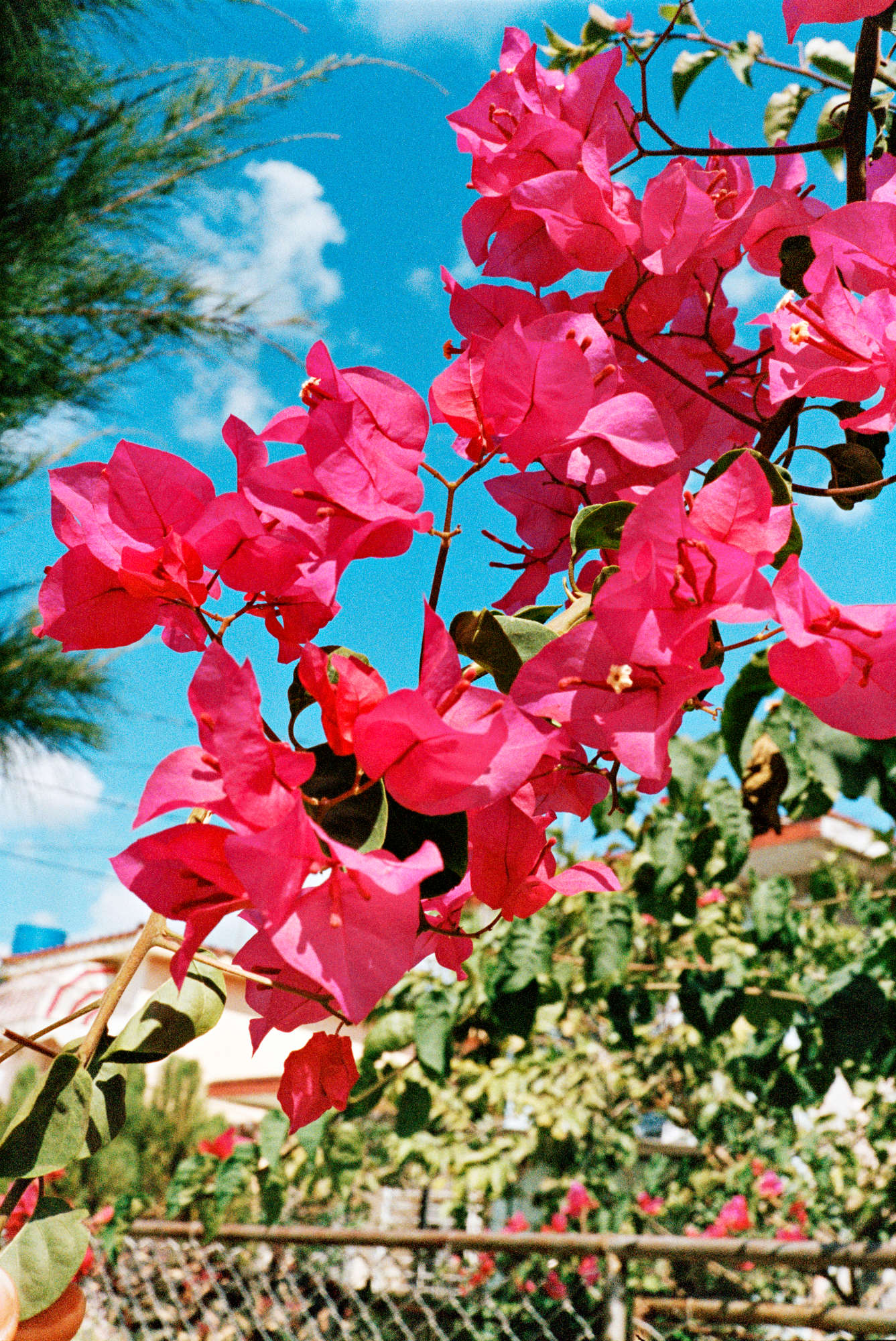 Gabriela and Dayron at the river, 2018 © Vincent Delbrouck 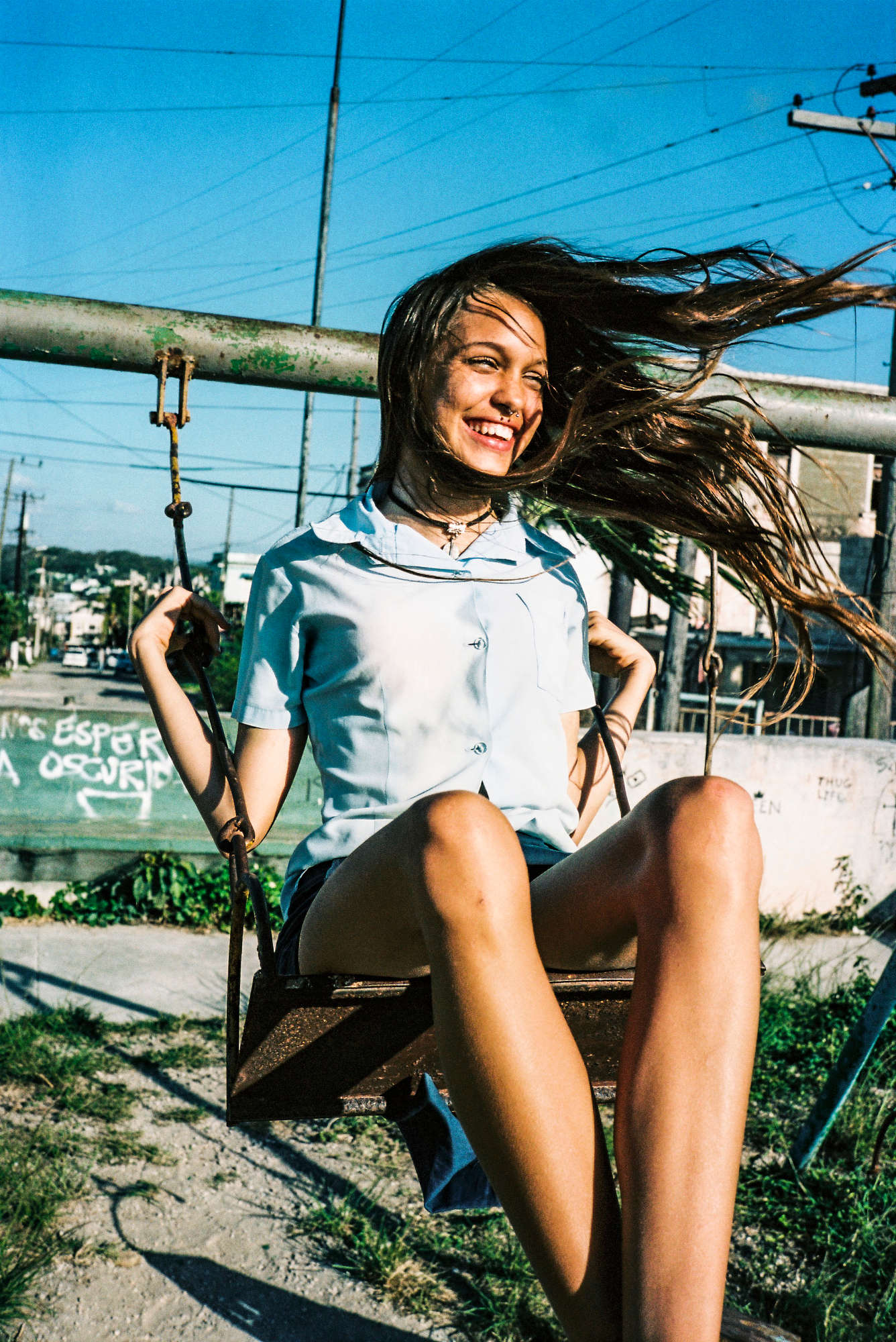 Leonardo at the river, 2018 © Vincent Delbrouck 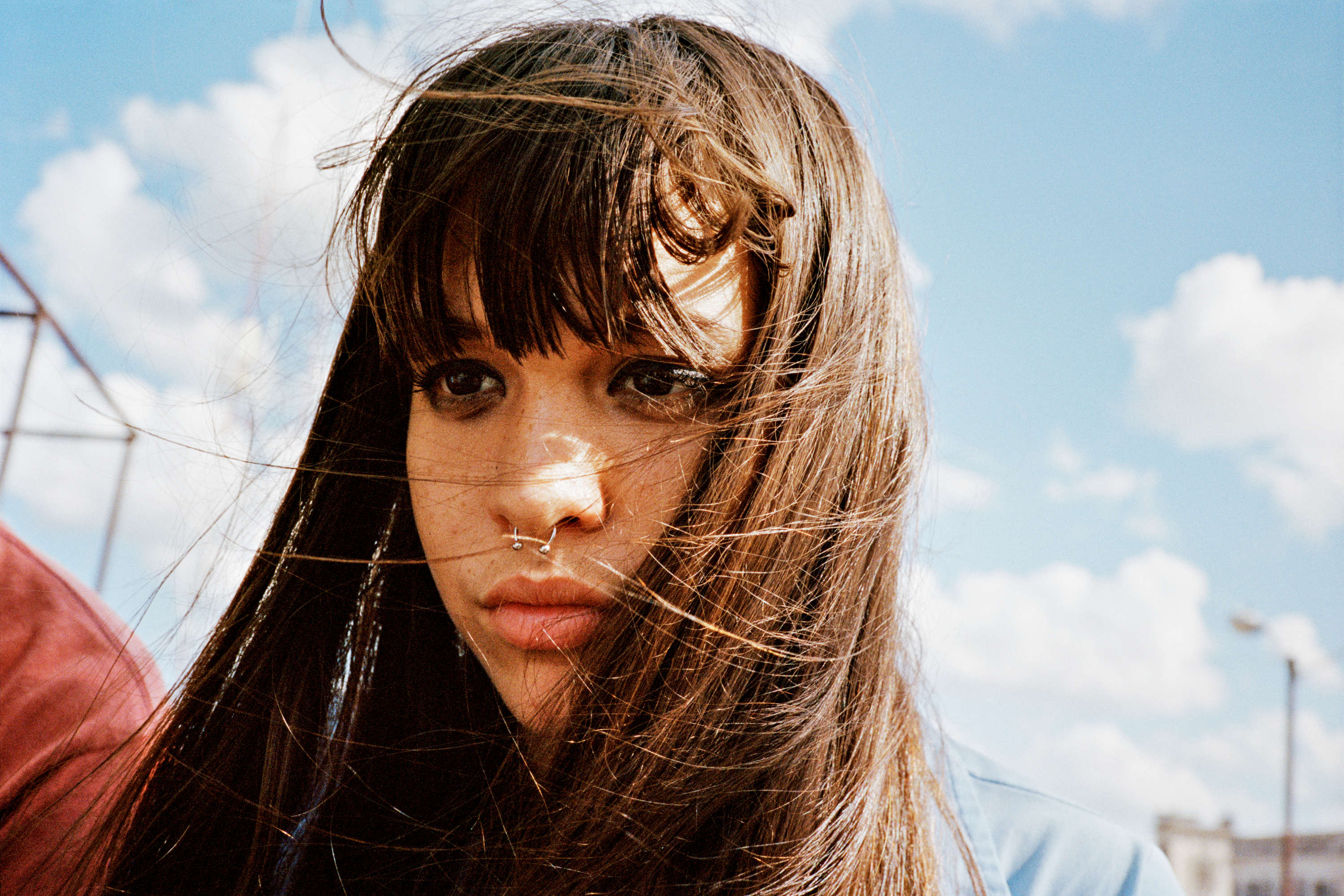 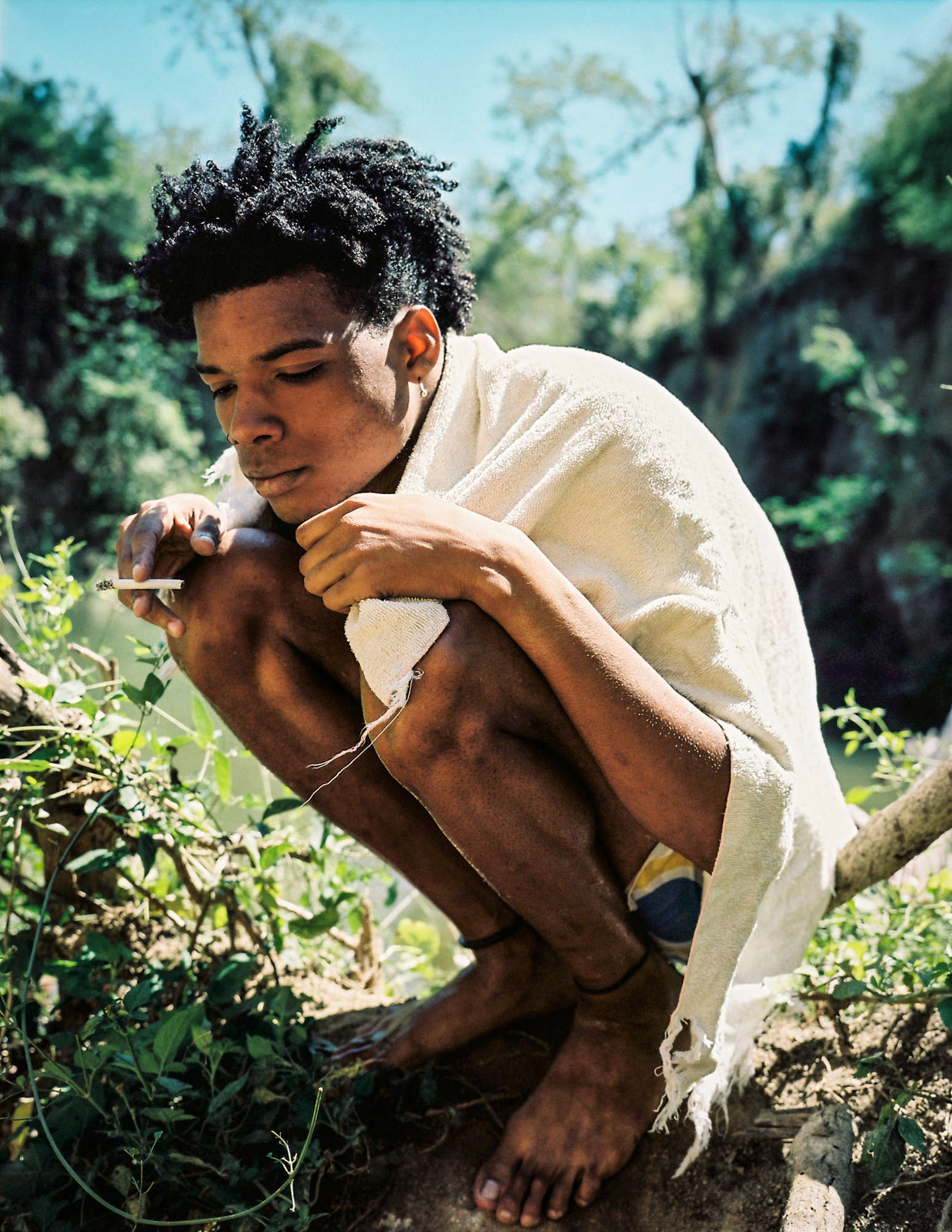 In Champú the ever-sensitive Wallonian photographer Vincent Delbrouck – no longer a teenager himself, but by his own admission ‘with adolescence as an ongoing story always burning in me’ – portrays a deluge of teenage sentiment and Cuban still lives in a positive flood of a hundred photographs throughout the museum galleries of Keizersgracht 401. Do we ever experience higher highs or lower lows than when we fall head over heels in love for the first time? When it is all so new and so dramatically intense that you become deaf and blind to everything else around you? ‘Life Sux!’ cries Oriss Abreu Pavie on her Facebook page: the typical sound of a teenager in love. Her very personal account adorns the gallery walls in Spanish, English and Dutch alongside Delbrouck’s photos. Oriss is one of the teenagers who live in Havana’s La Vibora district and hang out in the park where Delbrouck, who has visited Cuba many times since 1997 and has made several photo series there, came across them in the spring of 2018. He found himself imbued with their positive energy, and seeks to share it through his photos. Our first love is a unique experience: it is all the more remarkable, then, that Vincent Delbrouck has successfully captured this unique feeling in photographs. He says of Champú: ‘This colourful work is the most exciting and ambitious project of my life.’

The youth of La Vibora

Oriss is one of the teenagers who live in the La Vibora district of Havana and who gather in the Los Chivos park, where Vincent Delbrouck came across them by chance in the spring of 2018: ‘Suddenly there they were, Leslie, Oscar, Gabriela, Solanch, Addiel, Leonardo, Oriss, Sharawi, Marcel.’ Delbrouck struck up a conversation, took some photos at their request, and returned for the next few days. The photographer was completely accepted by the group. He met them after school – sometimes still in their school uniform – as they hung out in the park, by the river or on the beach: laughing, chatting, kissing, listening to music, smoking, drinking champú (diluted rum), making out… and he found himself being imbued with their positive energy. Ultimately this is what he hopes to share through his photographs: ‘It might be naïve, but I want this to put people in a good mood, and to stop them from looking only at Cuba’s exotic suffering.’

Delbrouck has been visiting Cuba since 1997; he has a special relationship with the island, and calls it his ‘adoptive country’. In recent years he has returned repeatedly to take photographs or to find the calm and inspiration he needs to begin a new, positive chapter in his personal and artistic life. Having always been attracted by ‘light, feminine energy’ it is not surprising that in 2018 he connected with this group of teenagers; to Delbrouck the encounter felt predestined. It led to his ambitious Champú project, a combination of still lives and portraits. Vincent Delbrouck made the still lives while walking alone through Havana; the images are full of a peaceful silence. Then there are the photographs he made of the teenagers, inspired by the fresh energy that Delbrouck calls ‘mystic and magical’.

Delbrouck’s photographic idiom is painterly and full of colour. He uses his photos to create his own fiction, and is clearly not being documentary. He uses two cameras. A small Rollei point-and-shoot camera allows him to photograph smoothly and quickly, but it has no rapid autofocus. ‘So it obliges me to focus on the body or on the small details, like the hair or the way a person is sitting. All those things are very important for me,’ says Delbrouck. ‘Even if there is some kind of action, it will always be some kind of portrait or like a still life.’

Delbrouck’s work is not characterized by a given scenario or plan. He seeks to capture the connection he feels with his subject, and the way everything is connected: a constellation of individual images that together form a sort of collage. Delbrouck makes his images intuitively: ‘I am not trying to dig so much with these kind of documentary aspects. So I am floating with life […] I am there, maybe also living with them, and that’s it.’ For their part the teenagers behave as if Cuba’s economic crisis does not exist. Instead they tempt the photographer with their tattoos, piercings, earrings, hair, clothing, and other intriguing details to make him photograph them instead of the circumstances in which they live. According to Delbrouck the park is their refuge, somewhere they can be together and forget that they have no perspective.

Born in the ‘special period’

The teenagers Vincent Delbrouck has photographed belong to a generation born in the so-called ‘special period’, the years following the fall of the Berlin Wall and the collapse of the Soviet Union – Cuba’s political and economic ally – which resulted in dire shortages of food and other products. Following the 1959 Cuban Revolution, which resulted in Fidel Castro instating a communist regime, the United States has maintained a trade embargo since the 1960s. The internet has become more available to many Cubans through the legalization of home networks and imported routers, but it is subject to censorship, and the government decides which websites the population is allowed to access. Freedom of speech, and journalistic and artistic freedoms, remain limited. But Delbrouck’s teenagers seem blithely unconcerned by any of this. So how do they see their future? ‘No real plans for the future here,’ says Delbrouck, ‘the country does not have the ability to offer careers. You should know it, and better lie on the floor and kiss your girlfriend or your boyfriend, starting to create your own path of little freedoms in this harsh world of decay.’

Vincent Delbrouck, or V.D. (Brussels, Belgium, 1975), makes extremely personal work that blends autobiography and fiction. He often combines his photographs with his own texts and drawings to create collages. His photobooks have a (fictional) diary-like character. His first photobook, Beyond History (Havana 1998–2006), appeared in 2008. In 2009 it was selected for the Prix de Livre d’auteur during Les Rencontres Internationales de la Photographie in Arles.

Cuba, and the capital of Havana in particular, form a motif that runs through Delbrouck’s life and work. Another country that is important to him is Nepal, where he and his family lived for a year (2009-2010) in its capital, Kathmandu. His Himalaya project resulted in three photobooks: As Dust Alights (2013), Some Windy Trees (2013) and Dzogchen (2015). Vincent Delbrouck has had several solo exhibitions, including in Fomu in Antwerp (2015) and the Musée de la Photographie in Charleroi. Part of Champú was premièred at the Photoluxfestival in Lucca in 2019.

The exhibition is accompanied by Vincent Delbrouck’s self-published photobook Champú.

The texts in the galleries are a series of Facebook posts by Oriss Abreu Pavie in the original Spanish as well as in Dutch and English translations.