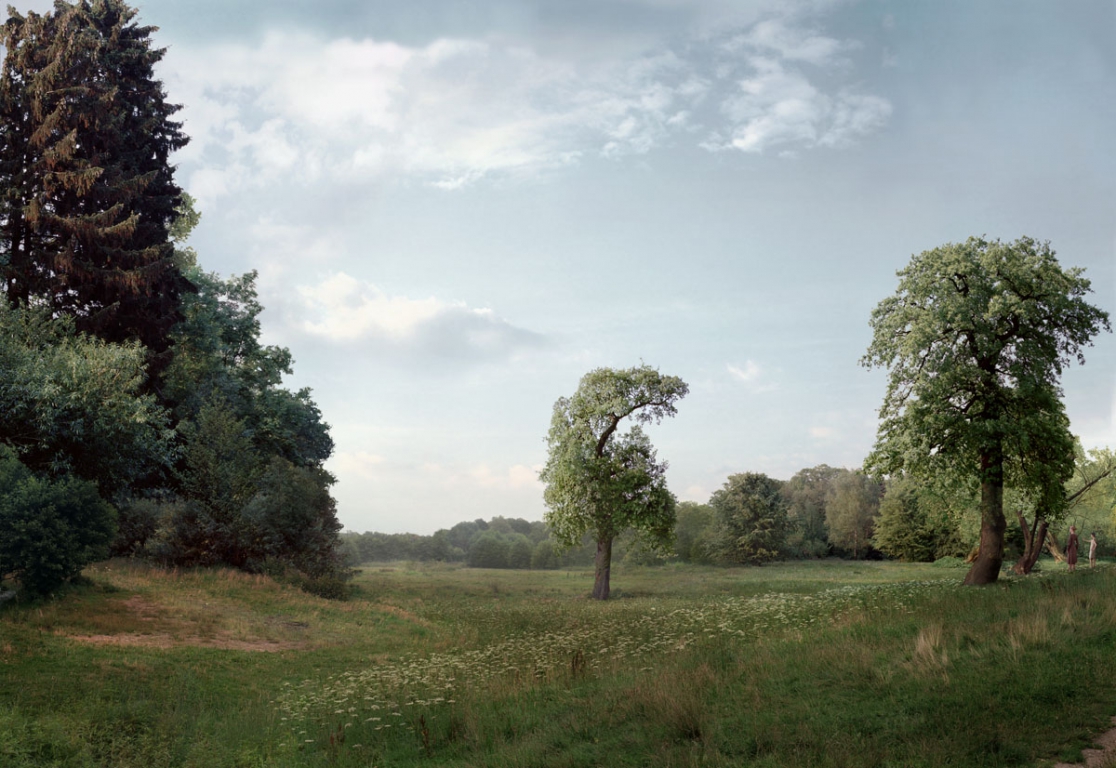 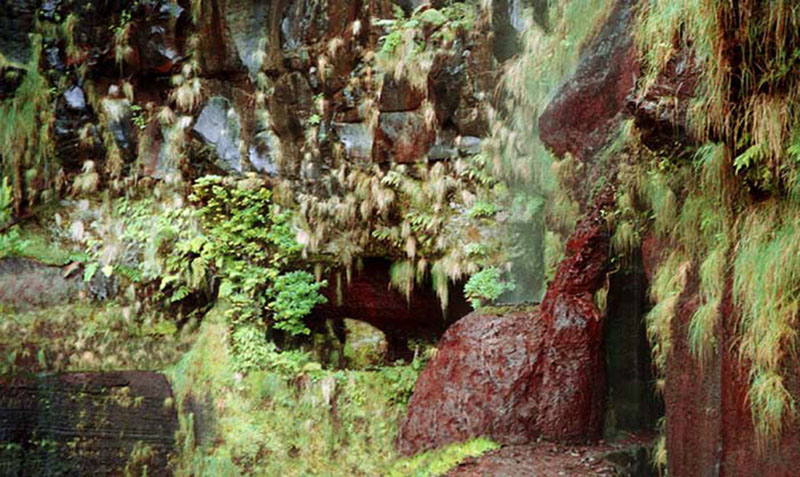 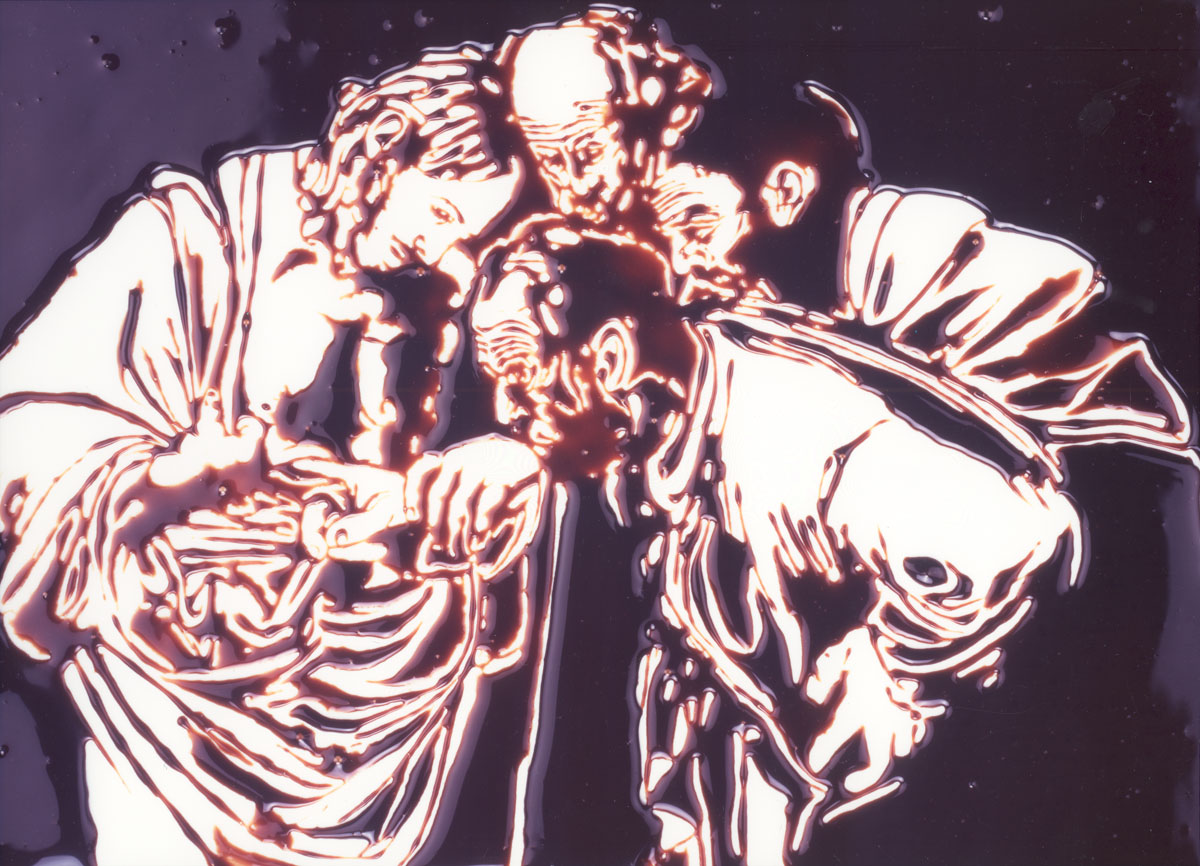 The Doubting of Saint-Thomas, after Caravaggio (Pictures of Chocolate), 1999, © Vik Muniz

This summer, visitors to Huis Marseille will have the opportunity of experiencing the contrasts and similarities between film and photography on the basis of works selected from the Huis Marseille collection and the H+F Collection (Runa Islam, Jörg Sasse), supplemented by several works on loan. The central focus is the artist’s search for the best technique possible. Although consumers are switching over in droves to digital, the choice between analogue and digital is not a self-evident one for many artists, photographers and filmmakers. The difference in quality remains a matter of debate: although pixel density increases with digital, the difference with old techniques is far from definitive. Runa Islam, Beate Gütschow, Jörg Sasse and Vik Muniz are led in their choices by the artistic possibilities of the medium to such an extent that the underlying technique – however complex – is essential to the expressive power of their intended images. And for the lesser-known young filmmakers who will be showing their short films on the open stage in the courtyard as well, the choice of technique (film, high-definition, dv, etc.) is what determines the expressiveness of their work. (Although they go less far in this respect.) In the discussion that Huis Marseille is organizing in relation to this exhibition at the end of June, prominent photographers and filmmakers will speak about their artistic and technical dilemmas.

German photographer Beate Gütschow (Mainz, 1970) works with sampled images to compose hyperrealistic photographs on the computer. She makes Arcadian landscapes that are reminiscent of 17th century landscape paintings. However, Gütschow’s idealised version of contemporary nature emphasizes the artificiality of the 17th century ideal. The urban environments in her newest, monumental black-and-white work also have a familiar quality. Employing segments of existing images, Gütschow photoshops our architectural heritage into utopian cityscapes. The hushed, monumental air of these images is also somehow threatening – is this the silence before, or after, the storm?

The German artist Jörg Sasse (Bad Salzuflen, 1962) also works with found photographs to which he gives new form and meaning on the computer. He possesses a large collection of anonymous snapshots: his sketchbooks. Sasse sometimes uses simply a fragment of a photo, changing colours, forms and contrast in such a way that a new image emerges. His way of working is like that of a sculptor: he starts with a large amount of raw material, and (unlike Beate Gütschow) reduces it by phases to one motif from which all traces of exact visual orientation have been erased. What Sasse presents on his website is experimental imagery – nothing more nor less than a numbered inventory of visual investigations.

Vik Muniz (Saõ Paolo, 1961) has exhibited in Huis Marseille before. Rather than reconstructing his imaginary world in the computer, he works in his studio with the most unlikely materials. In a virtuoso yet playful manner he copies and reproduces visual icons from art history, film, literature and visual culture, but then in wool, chocolate syrup and, recently, in diamonds and caviar. Muniz himself calls his spectacular works ‘photographic delusions’, in which he demonstratively refutes the implicit trust that viewers place in what they see.

This summer, Time Lines, the 35 mm film by Runa Islam (Dhaka, 1970), will have its Dutch premiere. The film was produced by the Centre d’Art Santa Mònica (CASM) in Barcelona, where Islam made the film. The camera follows a cable car’s slow journey on the cable-lift from the harbour to Montjuïc and back. Instead of the spectacular view from the cable car, the theme is the machinations which make that view possible so as to give the illusion of travelling through time and space – just as film suggests another reality, with the camera reaching inaccessible places and letting the viewer travel back in time. With Time Lines, Islam also demonstrates the relationship between the early 20th century amusement parks, where she shot the film, and the silent films from the same era, which were shown in such parks before cinemas came about. Films were one of the attractions that could give the public the illusion of a different reality. Islam therefore shot the film in 35 mm, the traditional feature-film format. The rattling projector and the intense experience of light and colour make viewers consciously aware of the medium and of the aerial journey.

Time Lines was acquired and given on loan by the H+F Collection, with which Huis Marseille has partnered since the beginning of this year; see: www.h-fcollection.com.

The parallels and contrasts between film and photography also present a good opportunity for becoming interactively acquainted with the work of many young filmmakers. Huis Marseille is offering an open stage for short films this summer. Each month a selection from the films that are submitted will be projected in large format in the inner courtyard of the museum. All of the entries can be seen on monitors in the Media Kitchen. Deadlines for sending in new work are May 22 and June 19. For more information, see: www.huismarseille.nl