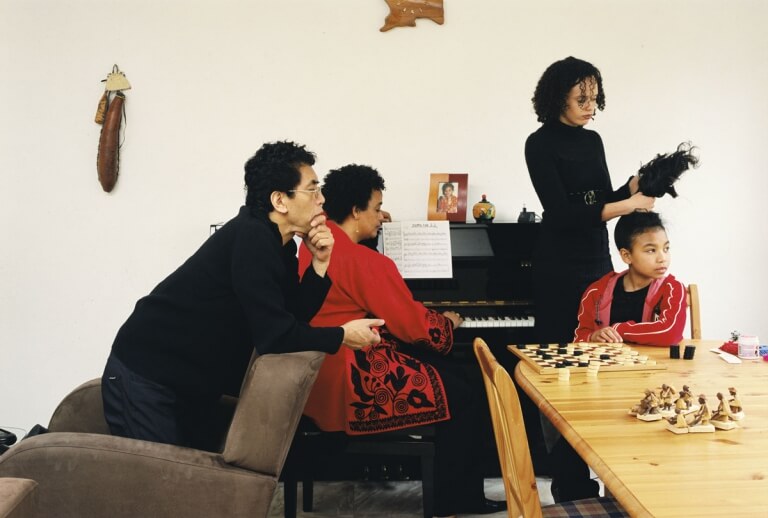 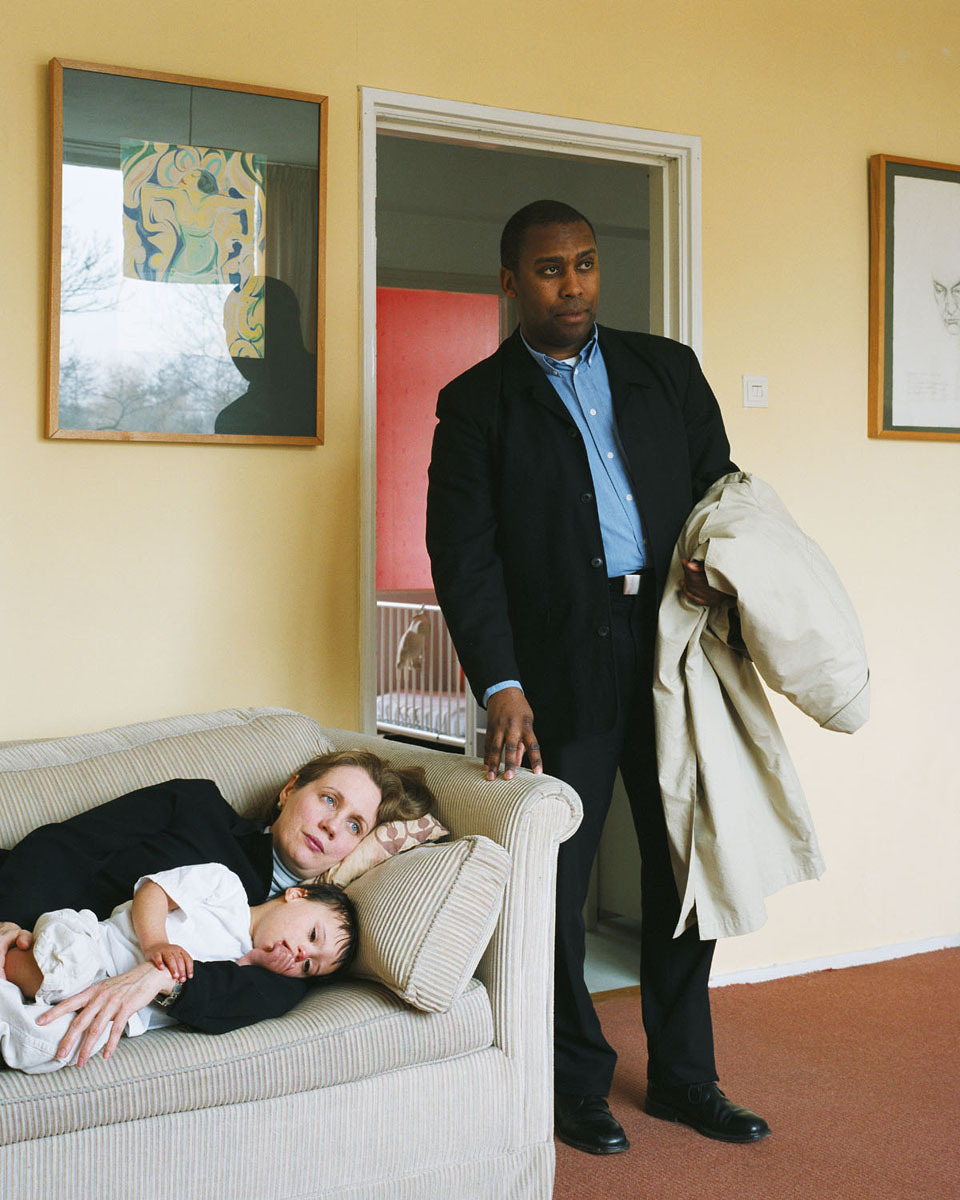 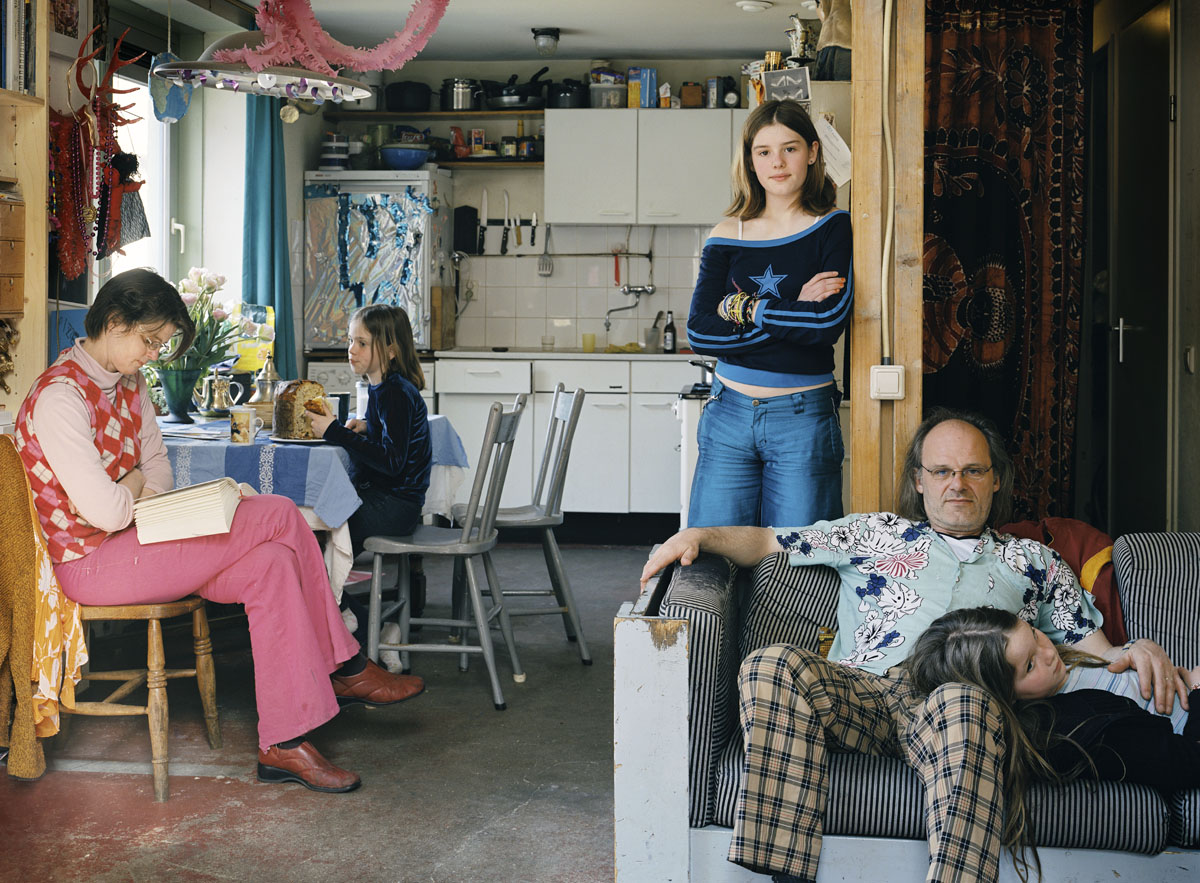 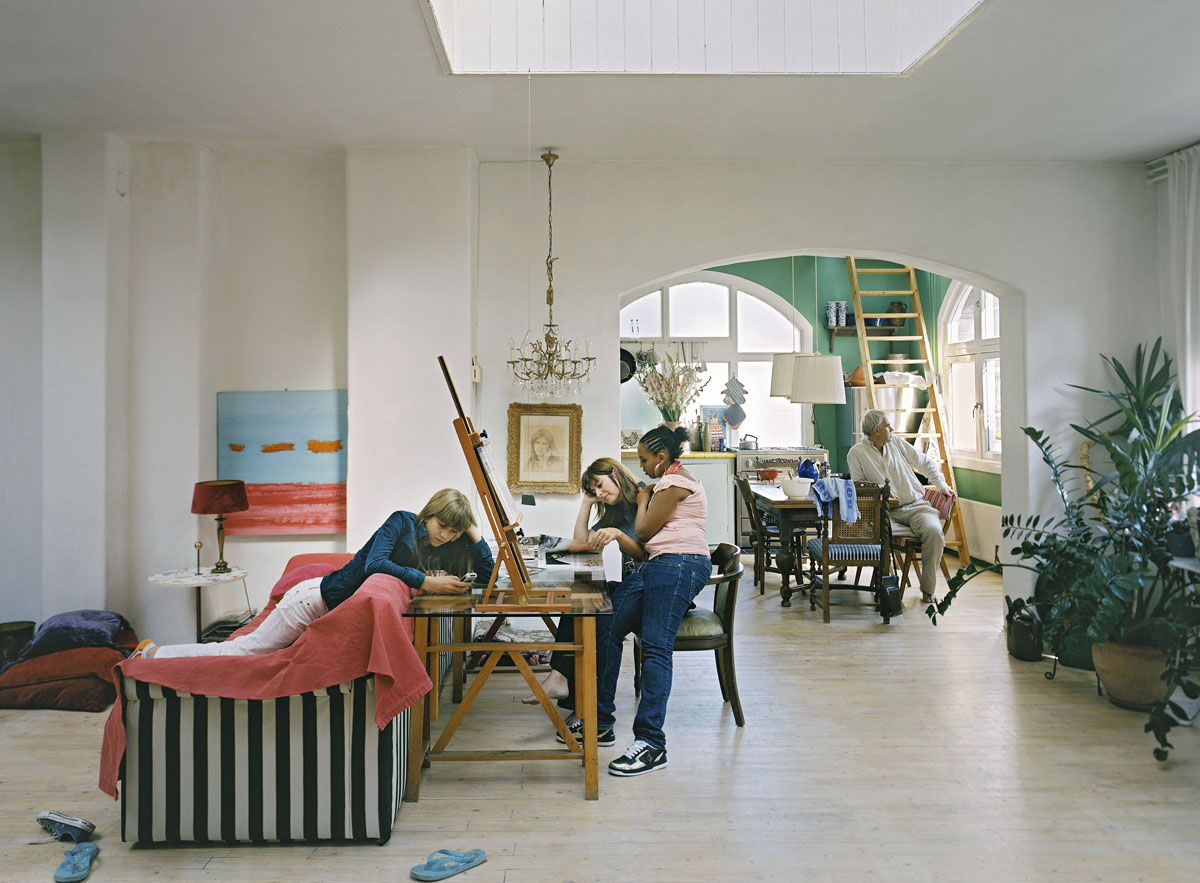 Two new exhibitions dealing with the theme of family in photography will open at Huis Marseille this spring. Along with the unusual and extensive collection of daguerreotypes from the Enschedé family, which includes the oldest known photograph in the Netherlands, contemporary family portraits by the Amsterdam photographer Taco Anema will also be on display.

A new portrait of the Enschedé family has been done by him as well. With his series Hollandse Huishoudens (Dutch Households) Anema shows just how removed today’s family portrait is from the stately, occasionally rather forced-looking group portrait of the past, which has been handed down to us on small and intimate silver-plated copper plates. Anema’s group portraits are scenes, or tableaux vivants. An informal, socially and sociologically inspired outlook lies at the heart of these. Furthermore, these large-scale color photographs are curiously reminiscent of the idiom in family portraits painted in the early part of the previous century. Taco Anema’s households are indeed more ‘tidy’ and certainly less caricatural than what the Dutch refer to as ‘Jan Steen households’. But they are also warmer and of a more casual atmosphere—more convivial and Dutch—than, for instance, the highly formalized family portraits by German photographer Thomas Struth. They convey less tension than the masterly but complex group portraits of Rineke Dijkstra. Not only does Anema’s work show a strong stylistic development of the family portrait; his photographs reveal the extent to which the Dutch family is changing—and has changed.

Taco Anema (1950) has his origins in the tradition of documentary photography, which has become highly developed in the Netherlands. The development of Anema’s work, from the 1970s up to now, runs parallel to this tradition. Following his study of sociology at the Vrije Universiteit in Amsterdam, Anema decides to become a photographer in 1975. He buys the book Sweet Life, an absolute masterpiece by Ed van der Elsken, and a Nikon Nikkormat camera with a 50-millimeter lens. In those days a good photographer was a leftist photographer, and photography was an instrument for activism.

Anema’s first published series of photographs deals with the squatters’ movement, particularly with the squatters’ riot in Amsterdam’s Vondelstraat. His black-and-white photographs appeared in the popular magazine Nieuwe Revu (now called Revu), then the second-best periodical (after the progressive Vrij Nederland) for publishing photographic essays.

Around 1980 Taco Anema photographs and publishes regularly with the well-known documentary photographers of that time: Willem Diepraam, Bert Nienhuis, Hans van den Bogaard, Han Singels, Hans Aarsman, Theo Baart, Lex van der Slot and Hannes Wallrafen. On his own initiative he makes a number of trips to Poland in order to chronicle the strikes and protests taking place there, as well as the rise of the free labor union Solidarnosz. These photographs were published in the newspapers De Volkskrant and Trouw, and in the weekly De Groene Amsterdammer. To Anema himself, they signified the start of his career as a documentary photographer.

Taco Anema is becoming increasingly specialized in portrait photography. From 1980 to 1995 most of his portraits were done for newspapers and magazines: (Nieuwe) Revu, De Groene Amsterdammer, Volkskrant, Trouw and NRC-Handelsblad. His strength seems to lie more and more clearly with the group portrait. In staging these he manages to orchestrate the arrangement of diverse groups in a lively and meaningful way. The ultimate composition should, in his view, also reflect some aspect of the group’s identity and its social role.  In addition to this, he experiments with visual formulas that are sometimes taken directly from the history of painting. Anema’s first series of group portraits to be displayed in a museum was made with different groups of inhabitants from the town of Enkhuizen. His success as a photographer of group portraits became established when the Holland Festival granted him the assignment of producing a series of portraits of the participating groups.

Just as in his earlier photographic reporting, Anema wants not only to show but also to convey a ‘story’ about the infinite differences among groups of people. In his new work he uses mainly the composition and only existing light in order to shape his point of view. He translates his idea about their mutual relationships into a spatial structure. With this he uses body language, poses, props and especially light as narrative and visual elements.

Since 2002 Anema has been working on a series about a hundred families in the Netherlands. Within the genre of the group portrait, he is intrigued by the phenomenon ‘family’, partly because conservatism and progressiveness contend for predominance here. The family as ‘the cornerstone of society’ seems a conservative institution, yet it does reflect the very changes in the make-up of the Dutch population, as well as its lifestyles and forms of cohabitation. And today’s multicultural society is, in his view, quite apparent in the average living room.

Following a relative lack of interest for some time, Dutch family life and the family are now regaining attention. In the Netherlands there have been projects such as Kinderrijk (2002) by Annie van Gemert, dealing with large families, and Familie in Beeld – Vriesendorp uit Dordrecht (2007), a large-scale commission project in which the Vriesendorp family had themselves photographed by prominent photographers such as Koos Breukel and the duo Blommers/Schumm.

A comparison with the portraits of Struth highlights the expressive power of Anema’s group photographs. The families in Struth’s works are positioned formally in relation to each other and in relation to the camera. The Dutch Households of Anema are more stratified; the accent lies with intimacy, togetherness, and the group complies with the dimensional aspect of the living room. Another difference is that, with Anema’s work, a great deal can be discerned from the poses and body language, while it is the face and the gaze that give direction to the Struth portrait. Furthermore, Anema’s family portraits are ‘built’ around the household environment, their natural habitat. These portraits are quite varied and colorful. All the discussion on contrasts between ‘native’ and ‘non-native’ families is put in perspective by his approach.

In April 1931 the photographer Dr. Erich Salomon gave a lecture on his work titled Mit Frack und Linse durch Politik und Gesellschaft (With Tuxedo and Camera through Politics and Society) at Hotel Kaiserhof (Berlin). Among the 400 guests were many high-level German political, industrial and academic officials, who now saw themselves in life-size projections. Those projections were accompanied by the incisive commentary of the photographer himself, who explained how he had made their portraits without being noticed. The lecture became the starting point for his book Berühmte Zeitgenossen in unbewachte Augenblicken, published that same year.

Both the text of Salomon’s lecture at Hotel Kaiserhof and the majority of the glass slides that he used for this withstood the war and are now in the Salomon Archive of the Berlinische Galerie. In 2001 Huis Marseille commissioned the reconstruction of Salomon’s historic lecture. This was carried out by the photographers Hans Samsom and Ewan Baan, in collaboration with Peter and Trudy Hunter, the Berlinische Galerie and Laura Samsom-Rous. The Dutch text is read by writer and former diplomat F. Springer, the English text by filmmaker Keith Washington. This projection will now be shown again in connection with the daguerreotype portraits of the Enschedé family and Taco Anema’s Dutch Households.

Trudy Hunter recently donated a very beautiful series of seven photographs by her father-in-law Dr. Erich Salomon to Huis Marseille. Salomon had made the portraits of conductor Bruno Walter (1876 – 1962) around 1930, presumably during a concert at Covent Garden, London. This series of photographs will also be on display with the projection.

This exhibition will be accompanied by a small publication, Taco Anema, ‘100 Hollandse Huishoudens (2001 – 2008), containing an essay by Fred Feddes. Publisher: De Verbeelding, 2009.