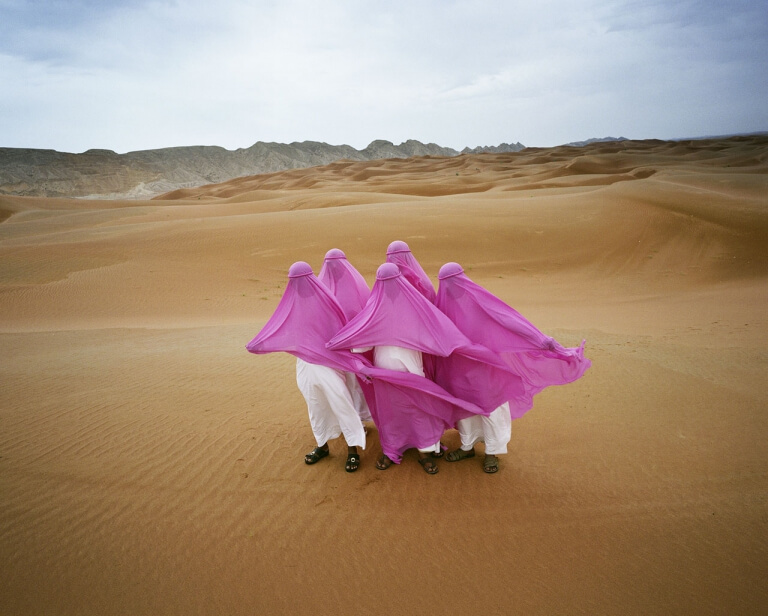 Only in a poem can a landscape be like a person. And in a poem like this, the photographer Scarlett Hooft Graafland would be conjuring up an exotic location, as most of her photographs take shape in distant lands – as do the images in the exhibition Shores Like You, taken over the last four years. Journeys to distant places are at the root of her work, and are often inspired by stories. In recent years, Hooft Graafland has sought out a number of remarkable trees about which she had read, or been told: the dragon blood tree, native to the island of Socotra near Yemen; ‘Old Tjikko’, in Sweden, whose 9500-year-old root system makes it the oldest tree in the world and the rare conifer, Araucaria columnaris, which grows only on the Île des Pins in New Caledonia. She learned of this last species from a book about the 18th-century explorer James Cook, who was almost shipwrecked on the coral reef that surrounds the island while trying to get the closest possible look at these trees.

‘A world of order and beauty’

Trees are a recurring motif in Scarlett Hooft Graafland’s work, not only because the photographer has loved them deeply from an early age, but also because of the remarkably sculptural forms the rarest species can take. Like silent witnesses, trees play a crucial role in the ‘rhyming imagery’ of her photographs, with landscapes forming the contextual backdrop to her carefully-staged installations. Like the chorus in a Greek tragedy, they can offer silent commentary. Her curiosity piqued by the account of Cook’s conifers, Hooft Graafland travelled to New Caledonia, but she took no photographs there, as the location turned out to be less than authentic and it proved difficult to make good contact with the locals. She moved on to the island of Maskelyne, one of the most southerly islands of the Vanuatu archipelago in the Pacific, which she had heard a woman talking about. It was ‘a truly idyllic spot’, writes Scarlett Hooft Graafland, “with little huts along the shore, mangroves, fruit trees everywhere, beautiful yellow frangipani flowers and locals paddling everywhere in canoes.” It was on Maskelyne that Hooft Graafland took the photographs using a model of Cook’s ship, Resolution, and it was there that, by pure chance, she happened to meet a descendant of the chieftain who had welcomed Cook to Maskelyne in 1774. His son stands in a turquoise sea with the model ship, under a cloudless blue sky, in a world of nothing but order and beauty.

The visual lightness of Scarlett Hooft Graafland’s signature style evokes an unspoiled world. In reality, alas, things are very different. Three days after she left the Vanuatu archipelago, cyclone Pam tore through these islands, with devastating consequences. In fact, most of Hooft Graafland’s compositions include references to contemporary global problems. In the triptych of the girl in the waters of Maskelyne balancing a long bamboo pole on her head, with the horizon in the background, the image subtly refers to the fact that most Pacific islands rise only a few feet above sea level. The photographer often uses a handful of fanciful, ephemeral materials to evoke a world of weighty associations. The fluttering pink fabric used by bearded Dubai men to cover themselves up in the desert instantly draws attention to today’s global refugee crisis when transported to a Swedish forest. And the airy touch of the tableaux she conjures up betrays nothing of the months of preparation that often go into their creation. None of these photographs could have been created without close on-site contacts and collaboration. Scarlett Hooft Graafland’s work is born of close cooperation with the local population, in a unique expression of mutual trust, with people offering help, accommodation, contacts, guidance and themselves as subjects. Sometimes – when the photographer is her own model – they take the photo for her.

The title of the exhibition – Shores Like You – was inspired by a line from Baudelaire’s famous poem L’invitation au voyage: ‘Au pays qui te ressemble!’ The title is ideally suited to the work of Hooft Graafland, who often travels to distant locations whose shores are the first part that can be seen, and it applies particularly well to the Vanuatu series, inspired by James Cook’s historic explorations.

But the title also touches on today’s global migration issue, with people fleeing violence in their own countries and refugees drowning when their packed boats capsize. “I travel to remote places because of their unspoiled nature”, says the photographer, “but there, too, you see problems similar to those in the West, like climate change and environmental pollution. There’s no escaping them.” Ultimately, Shores Like You is a title that invites the viewer to identify directly with what is being shown. While Hooft Graafland’s photographs are reminiscent of ‘luxury, peace and pleasure’, they, at the same time, allude to the global undermining of ‘order and beauty’ that is affecting us all.

Scarlett Hooft Graafland (Maarn, 1973) graduated in 1999 from the Royal Academy of Art in The Hague, and then obtained a Master’s in sculpture from the Parsons School of Design in New York. In recent years, her photographic work has gained international recognition. Recent exhibitions have been held in the Landskrona Museum in Landskrona, Sweden (2015), the Museum for Photography in Seoul, South Korea (2014), the MOCA museum in Lima, Peru (2013), the Museo Nacional de Arte in La Paz, Bolivia (2012) and the MoCCA museum in Toronto, Canada (2012). The exhibition is accompanied by the book Shores Like You, designed by Irma Boom and published by nai010 (168 pp., €49,95). It contains texts by Maarten Doorman, Scarlett Hooft Graafland and Gert Tinggaard Svendsen, and is available in the museum shop.

The video included in the exhibition was recorded on the beaches of Vanuatu and New Caledonia. It shows descendants both of James Cook and of the chieftain who welcomed Cook to the island of Maskelyne in 1774. The video was directed by Bart van den Broek of Filmdoc.