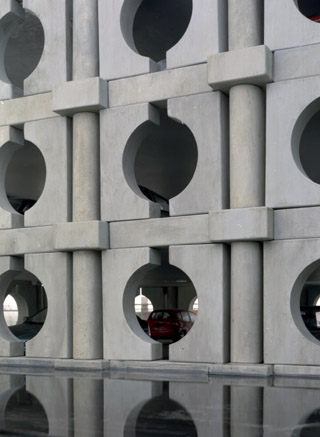 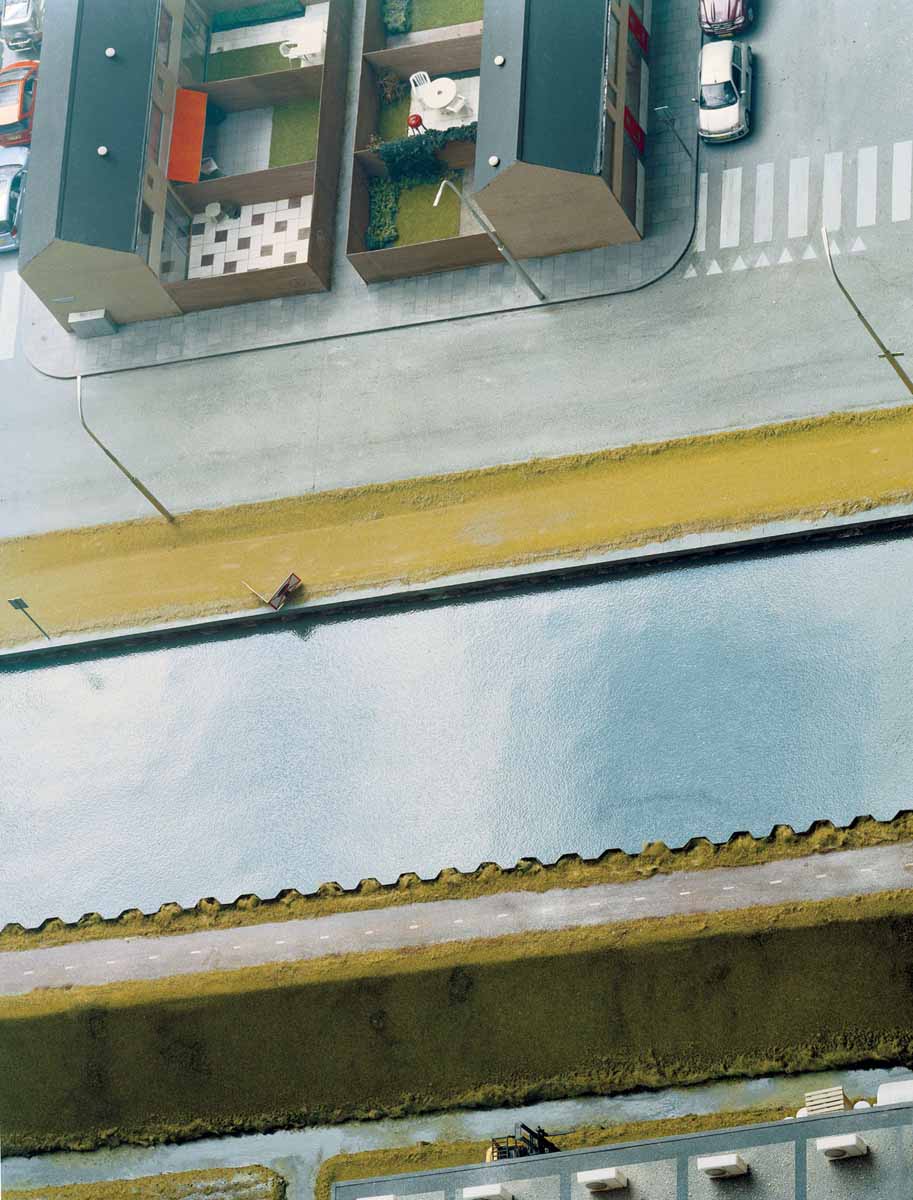 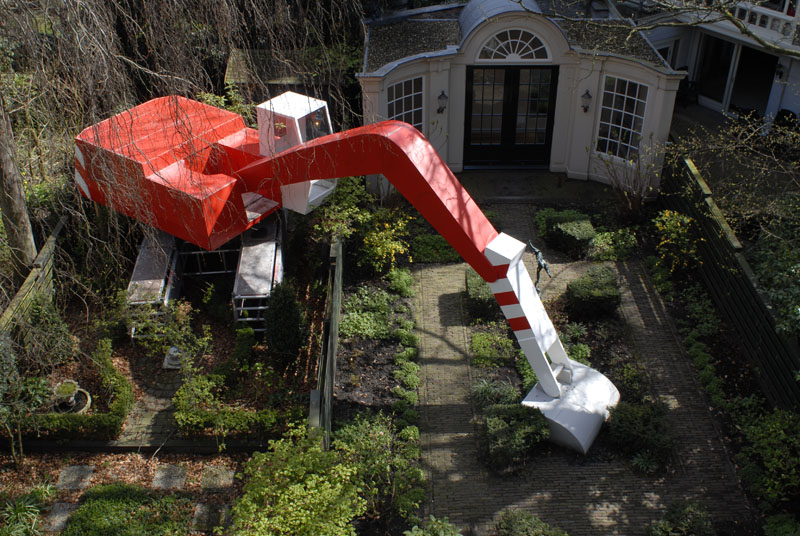 This spring Huis Marseille will be presenting a large retrospective on the well-known Dutch artist and photographer Edwin Zwakman (1969). His most recent series of photographs will now be shown in its entirety for the first time. The exhibition also includes a selection from his sketchbooks, which play a crucial role in the development of his projects and have a powerful expressiveness of their own. In addition to this, consideration is being given to the projects that Zwakman carries out on location and which were pivotal to the exhibition Iconic Target, held at the Ludwig Forum für Internationale Kunst in Aachen.

At first glance, it seems that Edwin Zwakman works within the tradition of documentary photography: we see new housing developments, traffic junctions and arteries, Dutch vistas, all taken from a specifically photographic viewpoint. The images are recognizable but never identifiable, as further inspection leads to the discovery that these are photographs of scale models constructed in his studio. Fake but Accurate: Zwakman creates a world that may not be real, but it is indeed true-to-life. This is how he prompts his audience to contemplate the manipulability of the Dutch landscape, the environmental planning of that landscape and its influence on society.

Zwakman often situates his photographs in the postwar suburbs of Western Holland’s major cities. The sober architecture of these apartment buildings, with their views of greenery, were to make better citizens for a better world during the years of reconstruction. The fact that this vision of the future ultimately failed to promote social cohesion in the neighborhood is among the themes subtly raised by Zwakman. In earlier series of works, Zwakman focused on the facades; for the series Apartment (2001-2002) he went inside. The apartment that he shows is empty: it isn’t clear whether the inhabitants have actually departed, leaving behind a dismantled wardrobe and an unhinged door, or whether new inhabitants are about to move in with their belongings packed in supermarket boxes.

Apartment shows the standardized surroundings in which many people must give shape to their lives: a stripped-down rental unit with white walls, light cast in through front and back windows, a small kitchen and an Ikea closet. There are countless versions of this in the Netherlands. The same can be said about all the strictly measured gardens in the series Backyards (2004), situated side by side, behind the row houses. Because these gardens are photographed from above, it becomes clear just how little privacy the residents actually have. A garden offers the illusion of a space of one’s own, but it is in fact being shared with neighbors.

Tales from the Grid

Zwakman’s latest series of photographs, Tales from the Grid (2006-2007) was produced during his fellowship at the University of Derby, England. While there, he tried to create an image of the Netherlands as experienced by him from a distance, without the option of comparing his ideas to those familiar surroundings. With the making of these works, he had to rely completely on his memory. Here the word ‘grid’ refers to the orderly, constructed and structured form of the Dutch landscape and to the form of the objects in the series. Among other things, we see a larger-than-lifesize empty shopping cart against the background of a parking lot (View Cart), a gigantic power pylon standing in an austere landscape, against a cloudy sky (Pylon), the glass grid of office buildings reflected in two puddles of rainwater on pavement tiles (Mirror, mirror) and the striking structuralist architecture of a parking garage built with toy blocks (Early Learning Center). The last of these portrays the invisible cage that Zwakman regards as the main undercurrent in the nature, culture and national character of the country.

Almost all of Edwin Zwakman’s photographs are based on memories and visual experiences. Impressions from daily life, but also dreams and ideas, are developed by him in sketchbooks. Zwakman produces drawings that give a direction to the creative process and serve as preliminary studies for his scale models, but they also help to shape his ideas. In his work the powers of perception play an important role. The various ways in which we look at and perceive the world – unconsciously or intently – explain the different positions that he chooses when photographing. He seeks images that reflect how he has experienced certain places and how that experience has been recorded in his memory. This determines his photographic vantage point – snapshot, aerial view, panoramic view – the composition and the atmosphere. It is not the photographic detail but his masterly control of light that gives his photographs their credibility and sharpens the emotional effect of the image.

Power of the Media

Edwin Zwakman also carries out projects on location, and these frequently have a guerrilla-like character. With these politically oriented projects, he wishes to raise discussion on the suggestive power of the media and the way in which news images manipulate our views. Huis Marseille is showing the project Monuments déplacés du Monde Arabe, which Zwakman conceived in 2005 for the project-development firm Euroméditerranée in Marseille. Billboards and light boxes show photographs of a large-scale urban renewal project in Marseille; into these photographs Zwakman incorporated internet images of famous monuments from the Arab world (e.g. Ka’ba, Hassan II Mosque). By doing so, he makes a critical comment on the fact that the houses of, for the most part, poor North Africans in this particular neighborhood were demolished in order to build luxury apartments, offices and shopping centers, while no new housing was found for them.

One of the objects that Edwin Zwakman continues to allow into his photographs and projects is the excavator. Its significance is ambiguous; whether Zwakman sees it as being constructive or destructive remains unclear. Painted white and furnished with a UN logo, he allows the excavator to surface time and again as an ‘Iconic Target’ in ostensibly peaceful places (Aachen, Graz, London) and thereby give rise to considerable confusion. A gigantic model of an excavator, shown previously at the Ludwig Forum, will be rebuilt specially for this exhibition in the garden of Keizersgracht 399, the building next to Huis Marseille that will soon be renovated in order to provide the museum with additional space.

The exhibition has been made possible with loans of work from the artist, from Galerie Akinci in Amsterdam, and from the Centraal Museum in Utrecht (a long-term loan from the H+F Collection).