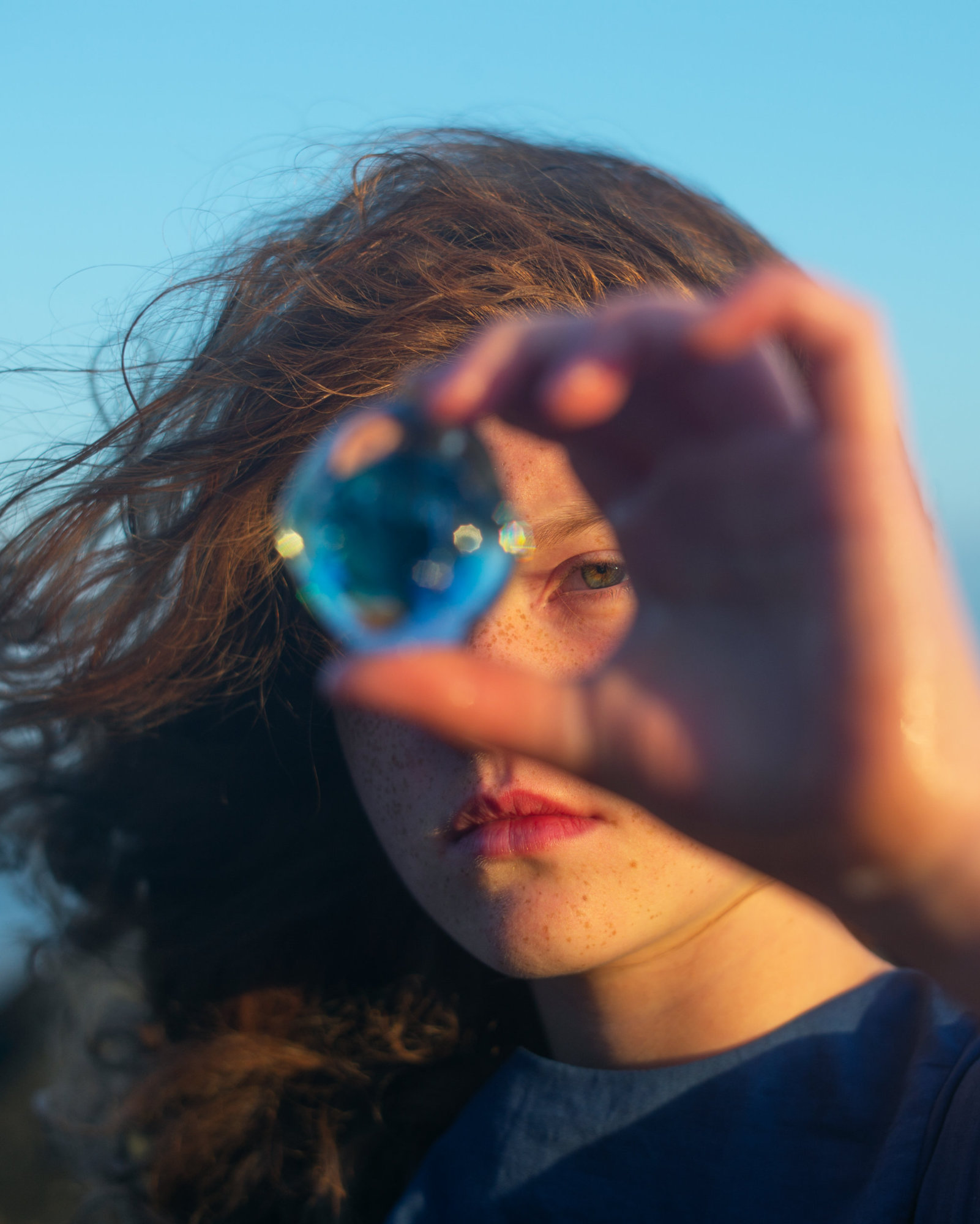 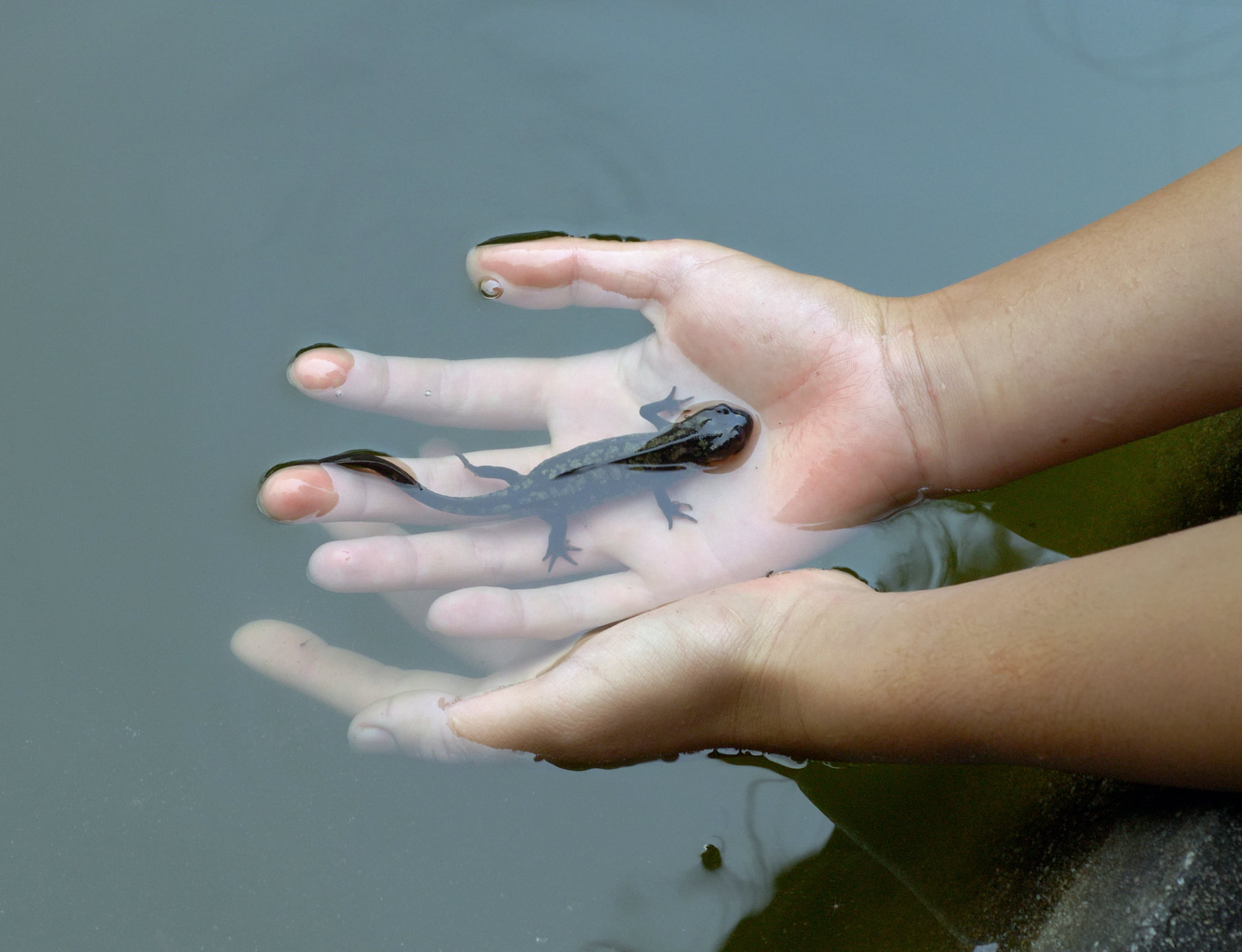 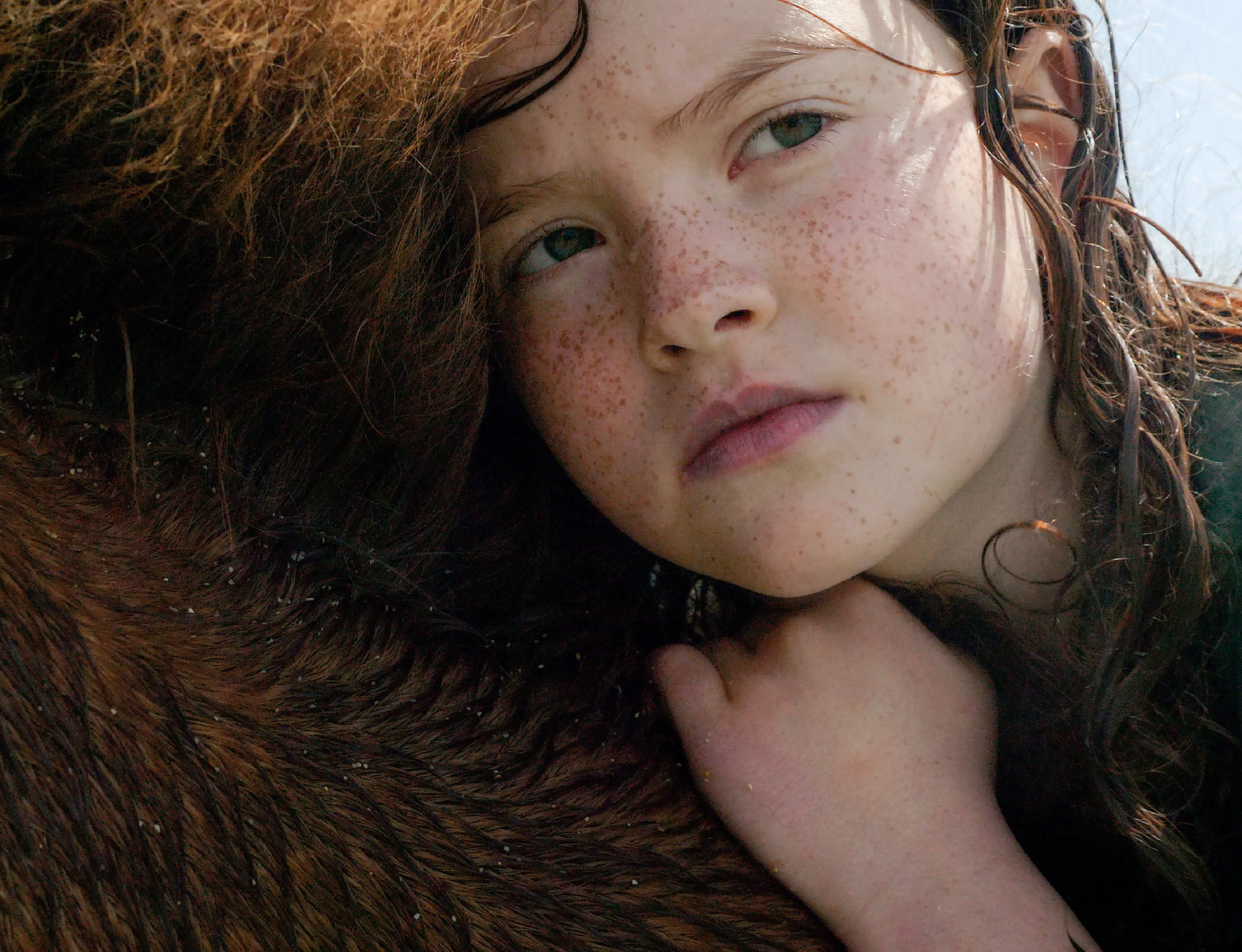 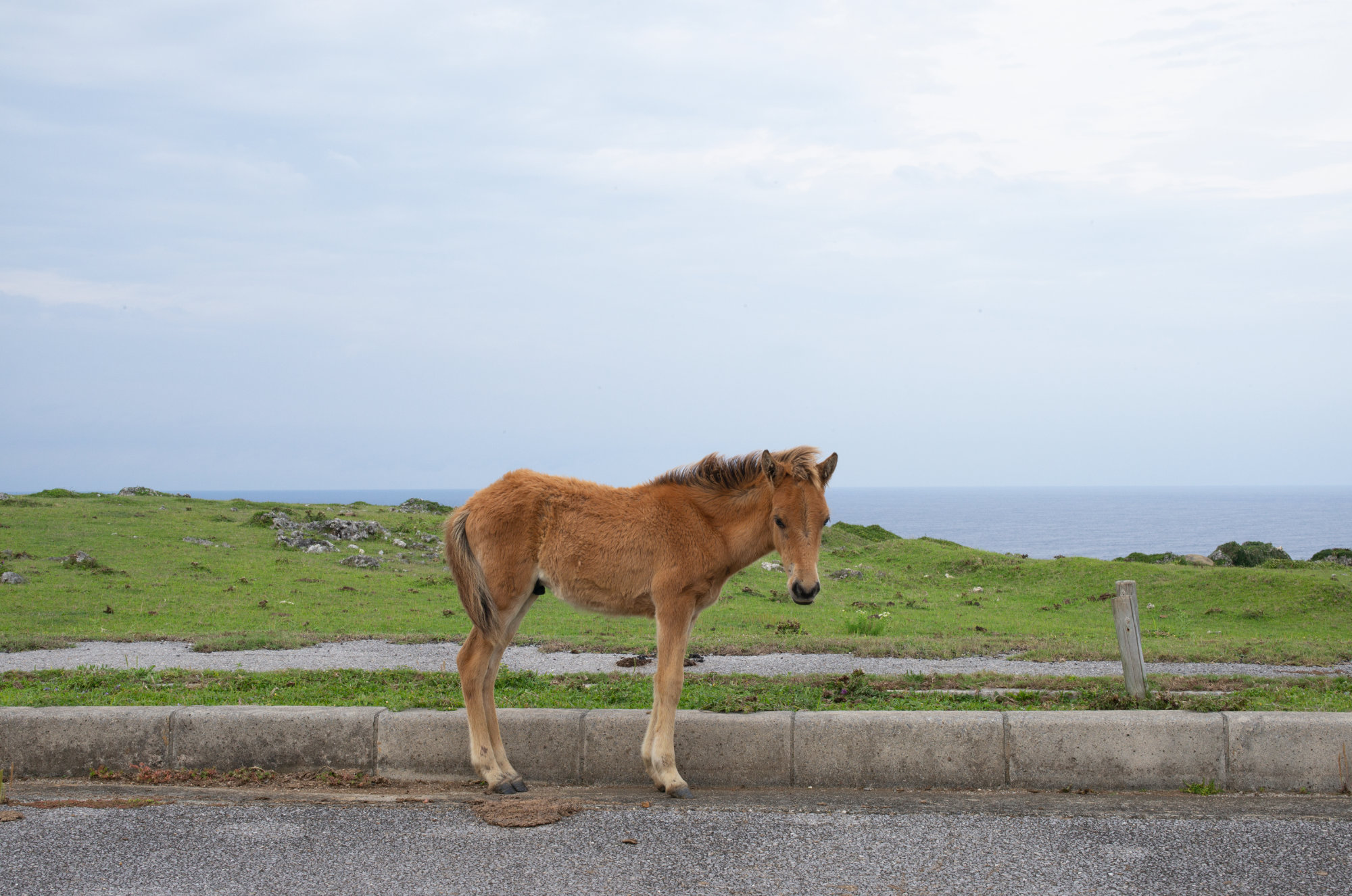 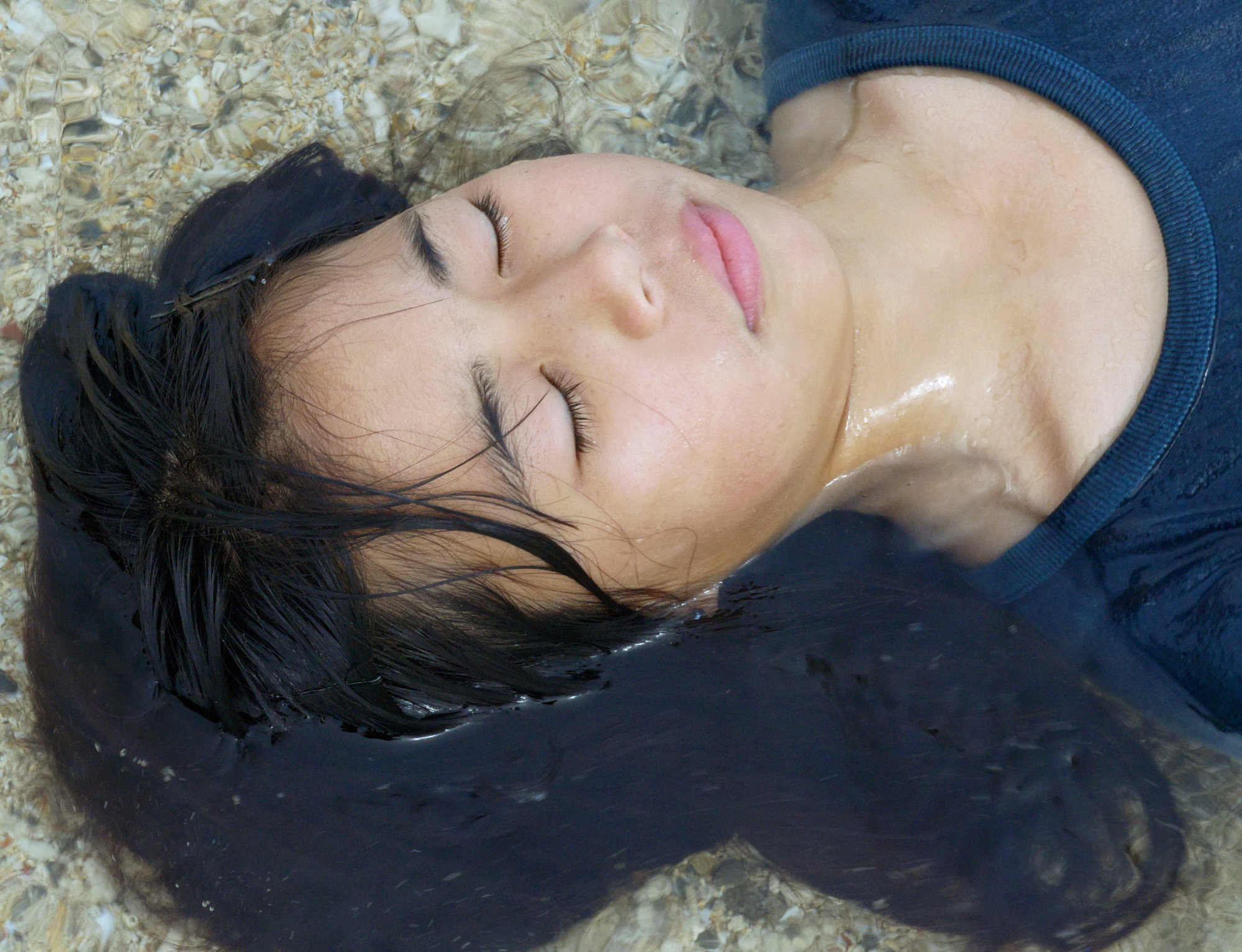 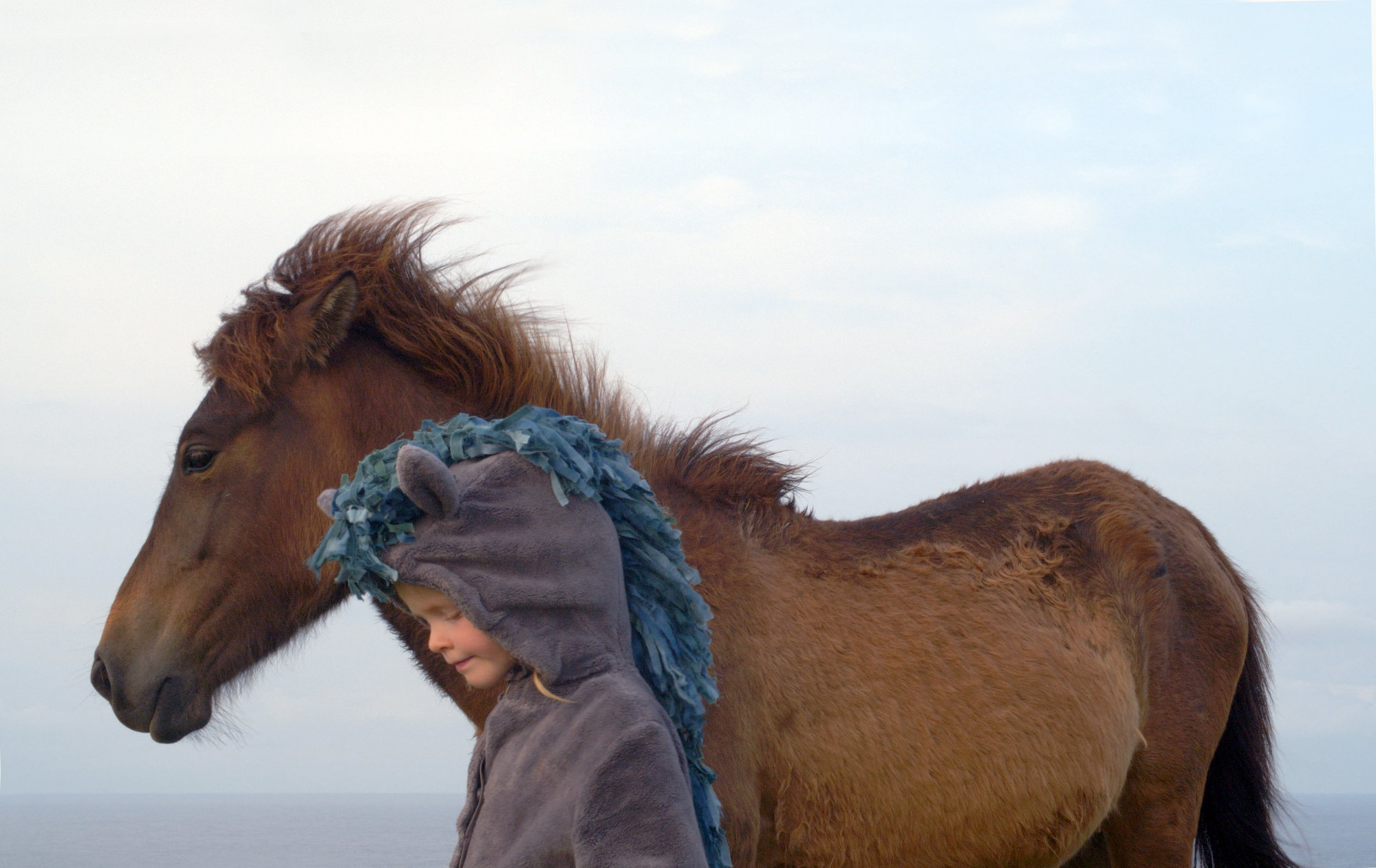 Ao 青 (‘Blue’) is the third short film by the artist Charlotte Dumas (Vlaardingen, 1977) with the Japanese island of Yonaguni at its center. Since 2015 she has studied this island and the critically-endangered breed of native horses that roam freely across it. A tragic part of the island’s past comes through in her characteristically intimate films and photos. In round glass objects, ballet shoes, or a horse’s girth cloth, a special blue colour recurs to link Japanese nature, the island’s horses, and three young girls, whose spirited independence brings a new energy to Yonaguni. The exhibition Ao is showing all three of these overlapping films together for the first time, complemented with photos from the same project.

The horses in Charlotte Dumas’ three short films, all on show in the exhibition Ao, exude independence. They stand impassively on the empty asphalt roads of the Japanese island of Yonaguni, where the films are mostly set. Dumas first visited these horses during her project Stay (2014/2016), which documented the last remaining eight indigenous Japanese horse breeds. Yonaguni’s slender little horses once fulfilled a vital role in the island’s community, as general workhorses but also with a religious function. Industrialization and the importation of larger Western breeds brought an end to their practical usefulness, however, and this led to a drastic decline in their numbers. An emblem of the region, Yonaguni horses can still be seen on the island that has been their home for hundreds of years. The horses that remain have been declared a protected living heritage.

Kinship between man and animal

In Dumas’ films the role played by the horses is equivalent to that played by people. In the first film, Shio 潮 (‘Tide’, 2018), a ten-year-old Japanese girl stands in the surf with her horse as she is trying to lead it into the sea. They seem to be waiting for something, or for someone.

Perhaps they are waiting for the little girl in the second film, Yorishiro 依代 (2020), who wanders, seemingly unnoticed, through the Japanese urban landscape until she finds her herd on the island. She is wearing a horse costume in purple and grey, with a blue-green mane. Though she seems to belong nowhere – neither amongst people, nor animals – like the horses she is endowed with an autonomous, almost magical energy, which links children with animals in Dumas’ films. In the third and last film, Ao (‘Blue’), a new character is introduced when another girl, in ballet shoes and on bare feet, traverses the rugged landscape amongst the horses.

The colour blue as a leitmotif

The Yonaguni horses’ habitat bears traces of a turbulent history. At the island’s most north-westerly point there is a deep crevice with a sinister story: in the eighteenth century, pregnant women were made to leap across the gap as a way to counter overpopulation. The site has become a place of commemoration. The construction of a military base and a radar tower in 2016 made the island a political pawn in tensions between Japan and neighbouring China. While its population dwindles and many buildings stand empty, the horses continue to roam Yonaguni’s steep coasts, forever tied to the island. In Ao, the girl comes face to face with the gorge in which so many women died. The energy and autonomy of the three girls and the horses contrasts with the darkness of the ravine.

In each of the films, textile creations by clothing designer Yuko Kitta recur as a leitmotif. In Shio it is the obi, a traditional girth that has fallen into disuse; in Yorishiro, the horse costume. A central theme is the colour indigo, that Kitta distils in the traditional way from plants that grow on the island. The blue shoes and dress worn by the girl in Ao are reflected in the installation of blue cloth in the gallery where this film is being screened.

Dumas’ Yonaguni horses, though small in stature, are majestic in their stillness. Charlotte Dumas is particularly well known for the intimacy of her photographic portraits of horses, dogs, wolves and tigers. ‘The portrait has to transcend itself, it needs to have an exceptional concentration. I want the viewer to feel alone with the image, so that a momentary kinship can arise with the animal in the photo.’ Her earlier subjects have included rescue dogs searching through rubble for survivors after 9/11, police horses, and caisson horses at the military cemetery in Arlington (US). In modern societies, actual human contact with animals is minimal. Dumas looks for places where contact between people and animals persists, and examines how their relations have changed over time. The ambivalence of this relationship fascinates her; while we often see animals as inferior to our own species – in some industries, after all, they are little more than consumer items – at the same time we identify with them. Dumas photographs the animals after they have finished performing their services, and are relieved of the function and symbolism that we are only too happy to impose on them. Here Dumas can penetrate to the core and uniqueness of her subject. With the exhibition Ao Charlotte Dumas proves once again that as an artist she has succeeded in capturing the essence and autonomy of both people and animals.

The exhibition is accompanied by the photobook Ao, designed and published by Hans Gremmen (FW Books).