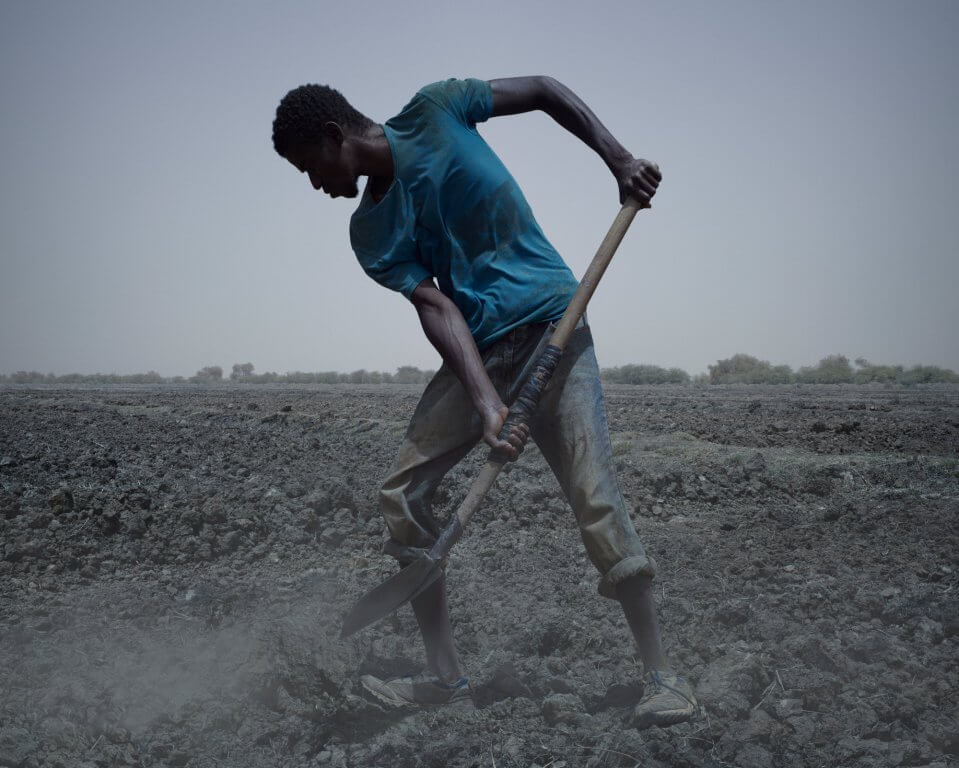 French photographer Luc Delahaye returns to Huis Marseille with Le Village, 17 years after his first exhibition there (Panoramas by Luc Delahaye, 2004). In this new body of work he combines large-scale photographic tableaux with documentary series to depict life in a small Senegalese village, focusing on everyday heroes, village scenes, and local mythologies.

Luc Delahaye (born 1962, France) is a photographer known for his large-scale colour works depicting conflicts, world events and social issues. His pictures are characterized by detachment, directness and rich detail, a documentary approach which is countered by dramatic intensity and a narrative structure. His works are at times reminiscent of history painting, such as Ordinary Public Consistory (2003), which was acquired by Huis Marseille after the 2004 exhibition. In this picture, showing the ceremony at Saint Peter’s in which the Pope Johannes Paulus II appoints new cardinals, the ritual looks like a theatrical staging, its drama surpassed only by the splendour and scale of the space. Opposing forces are at work in Delahaye’s pictures: the presence of the real, which he pursues in a dialectic game of absence to the self, coexists with the coldness and distance of the gaze; the clarity of the documentary style contradicts and enhances the dramatic intensity inherent to the subject and to the spectacular form of the tableau. Within their visual coherence these images express a nub of formal tensions, aesthetic and political stakes. They are documents-monuments of immediate history and they urge reflection upon the relationship between art, history and information.

In Le Village Delahaye shows life in a remote place, portrays its people, and illustrates the local mythologies transmitted through generations. While being an account of the everyday, his pictures are full of references to the spiritual world of djinns, to local legends, and to religion. This work is the result of a period of several months’ residence in a village in the Futa-Toro region of northern Senegal, near the river for which the country is named. Delahaye had come across this place some years before and had stayed in touch with one of its inhabitants. “In 2019 I wrote him to ask if the people of the village would agree that I settle down among them and do some work. The answer was yes and I left immediately. This place is an ordinary, unremarkable Senegalese village. It’s a small community in a limited space. I wanted to be in such a place and stay there a large amount of time in order to approach its smallest aspects and give them the meaning they deserve.”

The recording of reality, and its interpretation

The large colour works in the exhibition are based on situations of daily life. They are fugitive moments seen by the artist and registered in his memory, which he then slowly reconstructs, days or weeks later, by staging them in collaboration with the protagonists, whom he asks to play their own role. While trying to give a tangible existence and a structured form to something that was only a fragile impression, “it becomes interesting when I start to stray away from the original idea and reach something unexpected.” The themes of these tableaux range from a man mending his fishing net to the ritual sacrifice of a ram, from a quiet interior scene to a man working alone in a field. They describe a prosaic reality but their composition, the abundance of details and symbols, and the sheer presence of the people represented, unleashes the imaginary.

Delahaye combines these works with several series of smaller photographs which are related to a variety of approaches. For example, Scarecrows (2019), a group of eight prints, shows a succession of strange shapes, ghostly totems recalling the world of spirits and supernatural visions. With The Net (234 shots) (2019), the photographer assembled the raw photoshoot pictures used for one of his large works, like a magnified contact sheet where the decomposed action of the fisherman’s gestures evoke chronophotography. To make the works of this exhibition and in order to create a whole with multiple entry points, he used “any of the relevant means that were at my disposal,” including the straightforward approach to photography that he had effectively renounced long ago. Indeed, The Village, the Field (2020) is a series of 71 black and white photographs which unequivocally belongs to the tradition of documentary photography. There, in a dry and descriptive approach to reality, the photographer registers the presence of the people and records the traces of their presence. The series is a testimony to the hardship of the villagers, an ode to the humble. It spans from analytical landscapes to variations on a motif or a theme, and from portraits to still lifes. “Each photo was like a word or a part of a sentence and I tried to compose a poem with this, a poem in prose,” says the artist about this work.

A local tradition provided a frame of reference for the photographer in the making of his works: the Diaralé. Centred on the River Senegal, which is a character in its own right and a mysterious underworld traversed by many invisible lines of force, the Diaralé is an oral, partly improvised poetry and an extensive account of the landscapes seen by the poet in his travels. It is geopoetry in the sense that, while sustained by an intimate knowledge of the topography, the descriptions are recomposed at will by the imagination of the poet in order to summon the myths and legends of the region. In a similar way, Luc Delahaye manages to convey the complex reality of a simple place; to produce an account of the real in its multiple dimensions. In his pictures, faith in one God and belief in the power of the spirits are evoked or symbolized as much as the realm of material life, the bare facts of the harsh living conditions in this African village, are shown.