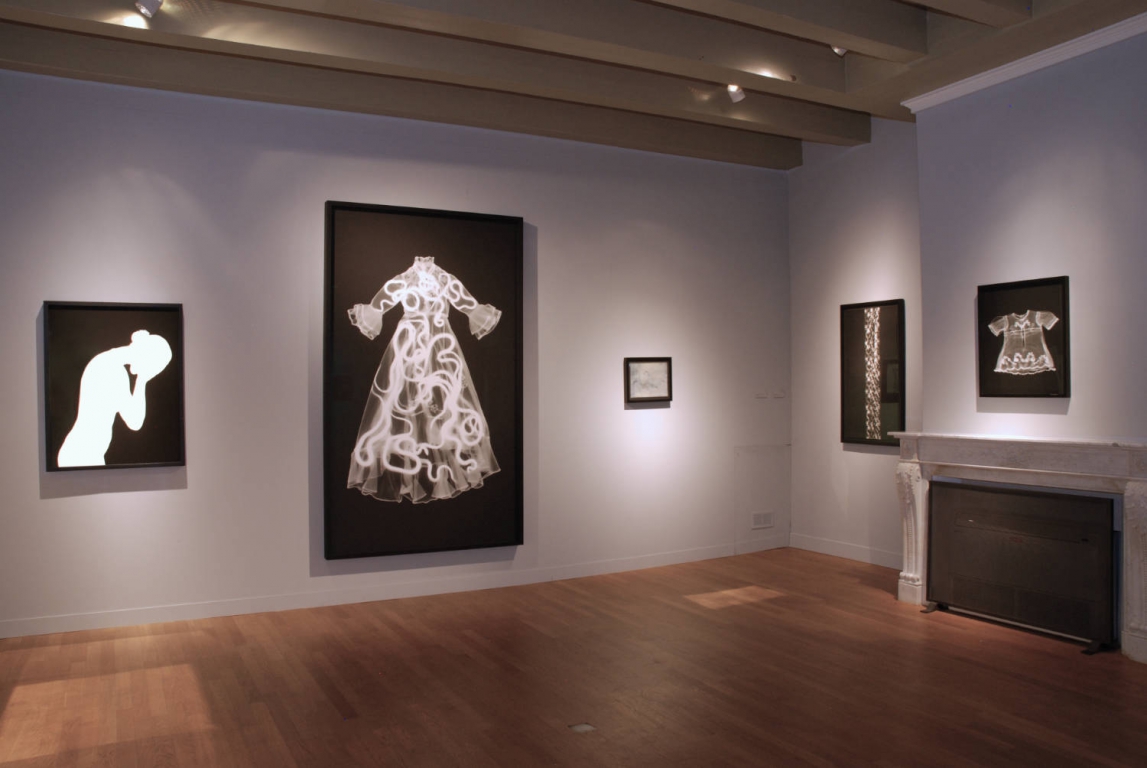 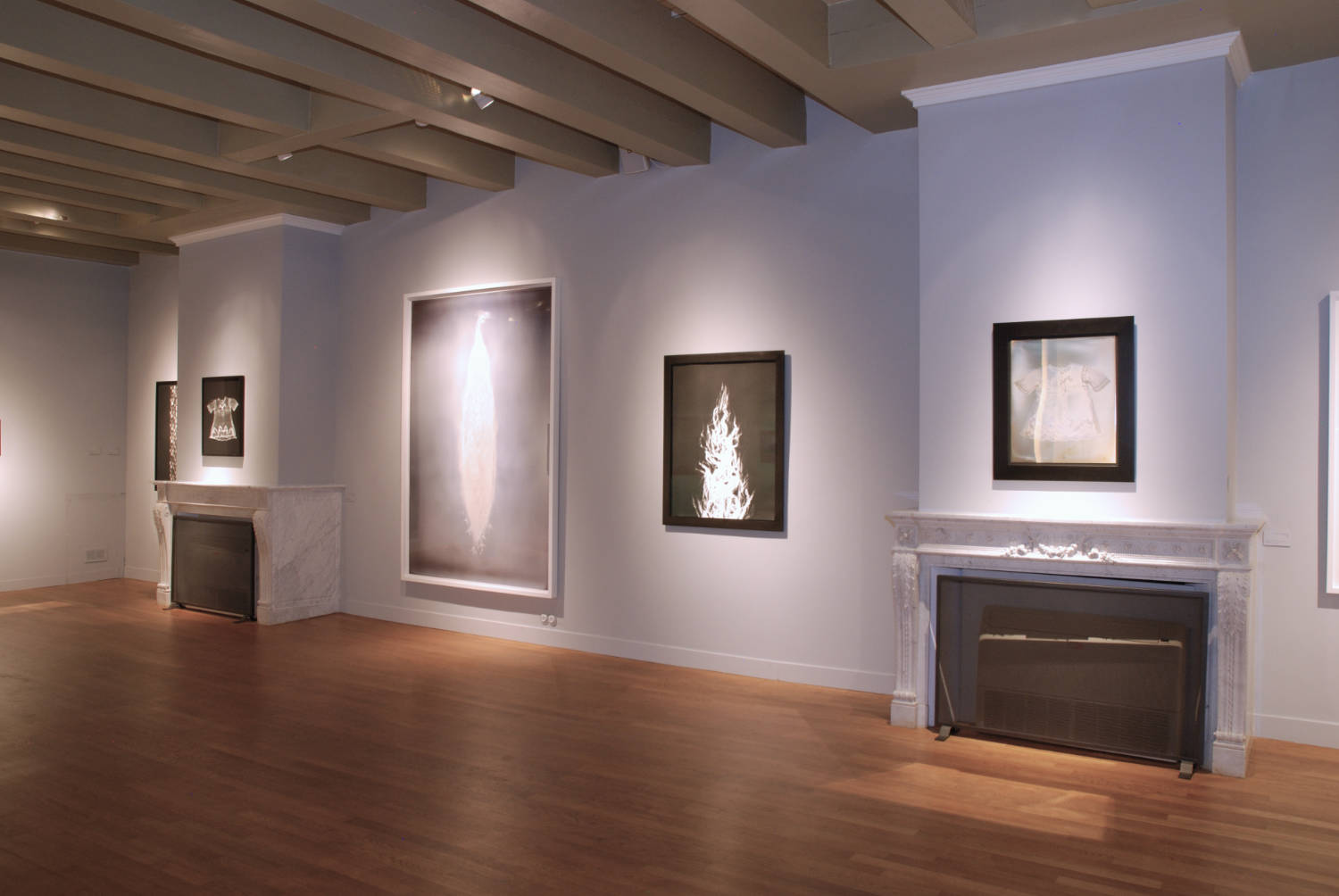 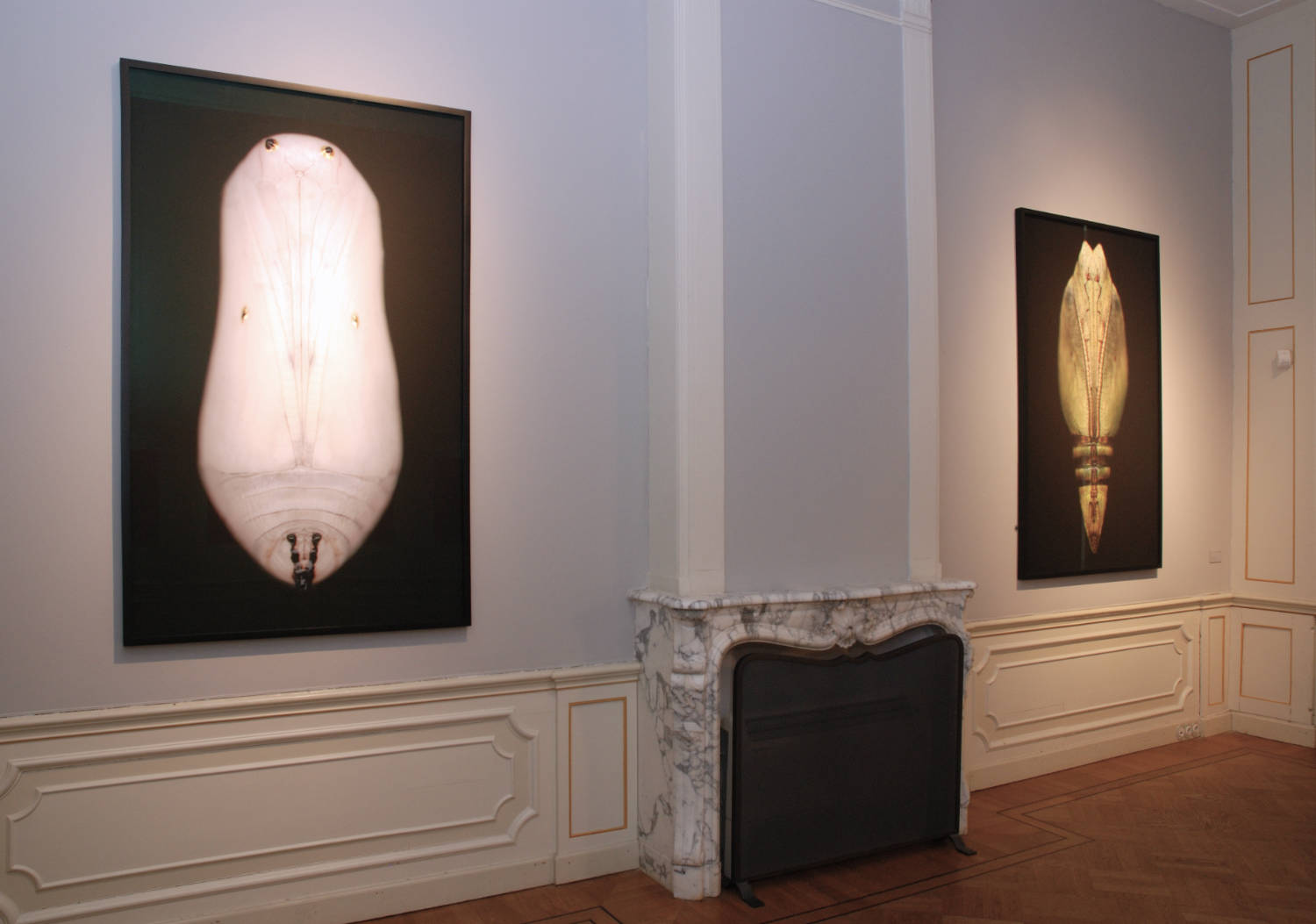 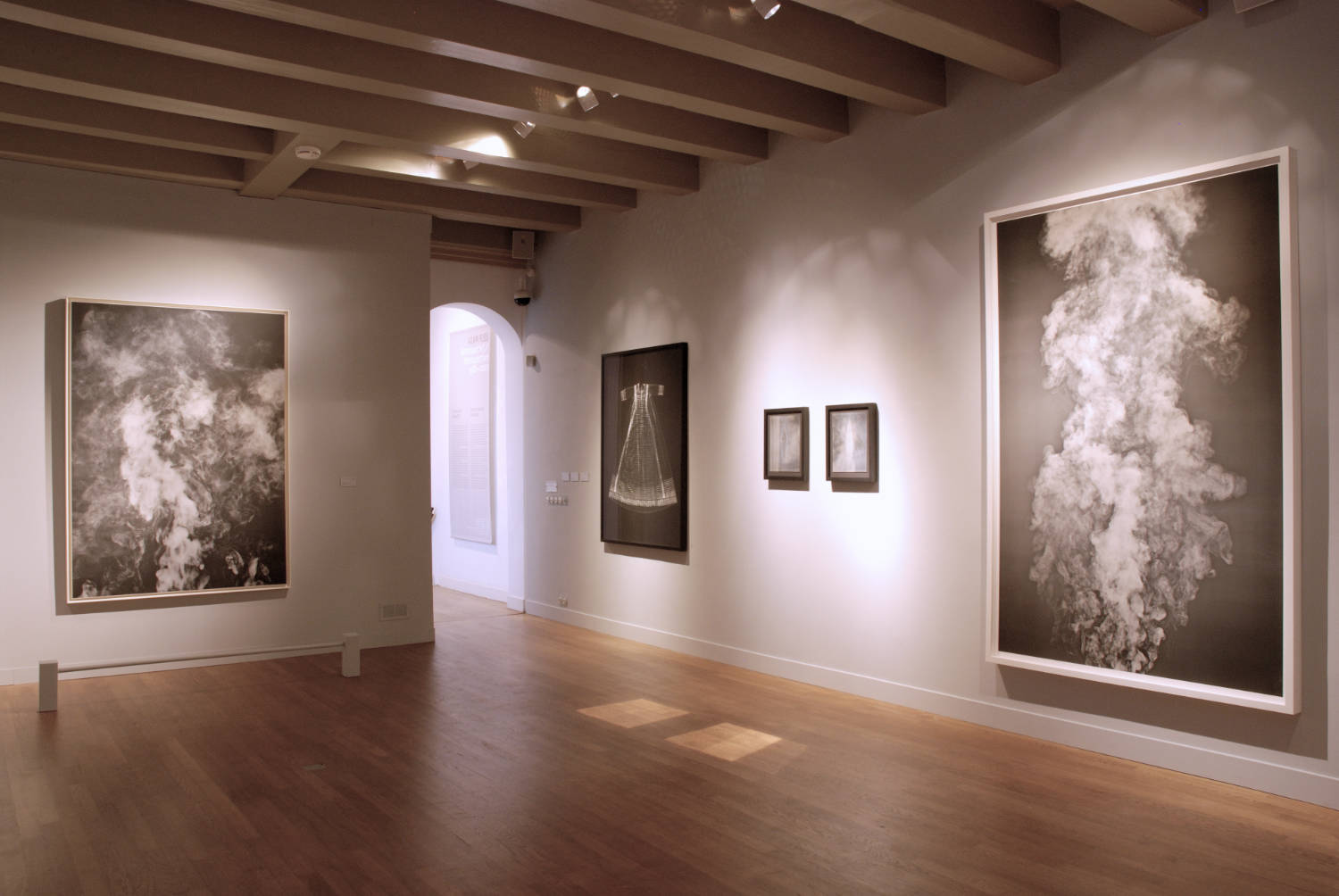 What immediately stands out with the work of Adam Fuss is that, both in terms of the chosen subject matter and in his approach to the photographic technique, he has greatly dissociated himself from conventional photography. That which Fuss produces is, in fact, still a photograph; but in order to achieve that, he did rid himself of all the finer luxuries available to users of the medium nowadays. Like a present-day alchemist, Fuss has mastered the medium’s most elementary and primitive forms; he sees just as much potential for creativity in technical knowledge as in the imagination, or the visionary power of the photographer. His subjects (silhouettes, gossamer christening gowns, rabbits, butterflies, snakes, lace, smoke, drops of water) have also been removed from their natural habitats. In the studio they become so epitomized that they assume the strength and quality of a symbol, or icon, fraught with emotion. Fuss seems, figuratively speaking, to have given wings to his images: they have a weightless and elusive appearance, as though being supernatural in origin and import.

Though ostensibly sublime, the work’s impact on the viewer is nevertheless one of predominantly earthly beauty. This may be a consequence of the bipolarity that lies at the heart of it. All of Fuss’s endeavors have a twofold focus: on matter and mind, on earth or water and the dynamics of fire or air—in short, on vital forces in relation to space and history. Sometimes, as a true photographic magician, he allows the vital fluids of animals (snakes, rabbits) literally to corrode the silver salts of the light-sensitive photographic emulsions. As though trying to allow the image and its
model to share the same source of life. In his technique as well, Fuss wants to reconcile, to connect, past and present. With this he goes back, through experimentation, to the source. Here and there his printing technique is reminiscent of the zeal and the limitations with which Daguerre and Fox Talbot, the disputed founders of photography, wanted to put their discoveries into practice. In the course of time, he came to master the various old and highly complex processes—that of the daguerreotype, the calotype, the photogram, the platinum print—to a degree that remains unsurpassed. Each of these works is unique, and their technical standard is unparalleled. Fuss’s accomplishments include the making of the world’s largest daguerreotypes. (Both daguerreotypes of the Taj Mahal on display here can be counted among these.)

Throughout his work Adam Fuss seeks the very essence of the image; to him that lies particularly at the point where an observation of reality is so intensified that it takes on magical powers, so to speak. His outlook on this comes from the notion of ‘Poetic Genius’ expressed by the British poet, writer, engraver and painter William Blake (1757-1827). It seems that Fuss’s idea of producing daguerreotypes of poems and incorporating them into his work also began with Blake. In Fuss’s extensive 1998 interview *) with Mark Haworth Booth (then Curator of Photography at the Victoria & Albert Museum in London) he explained this in relation to his photographs of babies in water, saying that the color photographs are actually not about an individual, a child. The titles Invocation, Journey, Wish have more to do with emotional, romantic ideas. What the image conveys is a feeling, a sensibility. This is no depiction of a baby in water, even though it may be that as well. Fuss has an incomparable command of the photogram technique. Since 1988 he has been achieving astonishing results with this. The photogram is produced without a camera—and yields, by definition, a unique print. The physical and lifelike quality of these silhouettes is further heightened by the 1:1 scale on which this technique is based. The previously mentioned photographs of babies in water, from the series Invocation (a continuous series with silhouettes of children) are the earliest photograms shown here. Since 1999 Fuss has been making work which he titles My Ghost. Here the themes relate to memory, loss, but also images of remarkable beauty, such as those of peacock feathers. In this series his magnificent daguerreotypes play a leading role.

This exhibition comprises approximately fifty images by Adam Fuss, dating from 1986 to the present, with examples from his major series as well as the premier of his most recent efforts. The selection will not only gather images that the artist believes to be among his best examples, but also together will recreate the ambiance of a location sacred to him. It has been organized by Fundación MAPFRE (Madrid) in close consultation with the artist and Cheryl Brutvan, Curator of Contemporary Art at the Norton Museum (West Palm Beach, Florida) and curator of his first
survey in the United States. Especially for his exhibition at Huis Marseille, Adam Fuss has made a selection of photographs from his own photo collection. The selection consists of historical and
recent, often anonymous, but very curious images. Adam Fuss was born in London in 1961. Because his mother was Australian, he grew up partly in London and partly in Australia, where he began his career as the studio assistant for a commercial photographer. In 1982 he moved to New York, initially getting by as a waiter for the Metropolitan Museum of Art and as a photographer of
exhibitions. Along with the British photographers Susan Derges and Chris Bucklow, Adam Fuss introduced a new interest in camera-free photography and older techniques. His work has been shown, and collected, internationally: at, among other institutions, the Victoria & Albert Museum in London, the Metropolitan Museum of Art in New York, the Museum of Fine Arts Boston and the Kunsthalle in Bielefeld. This exhibition is his first in the Netherlands.