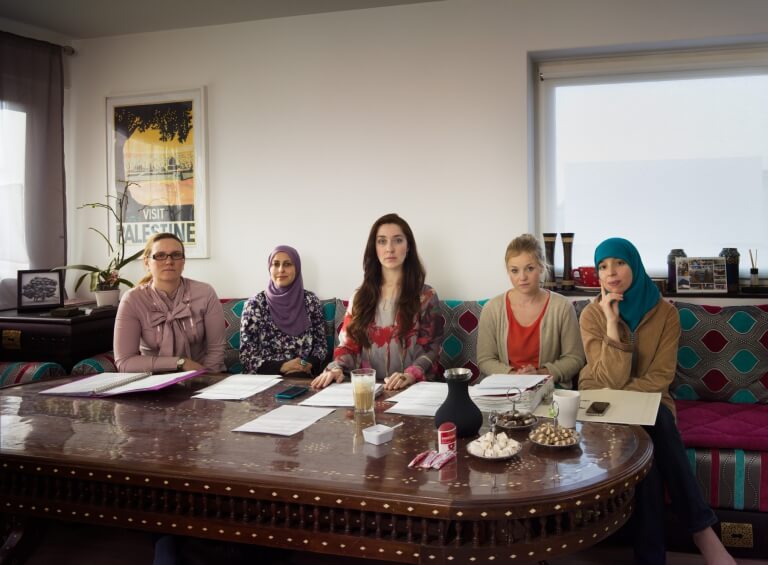 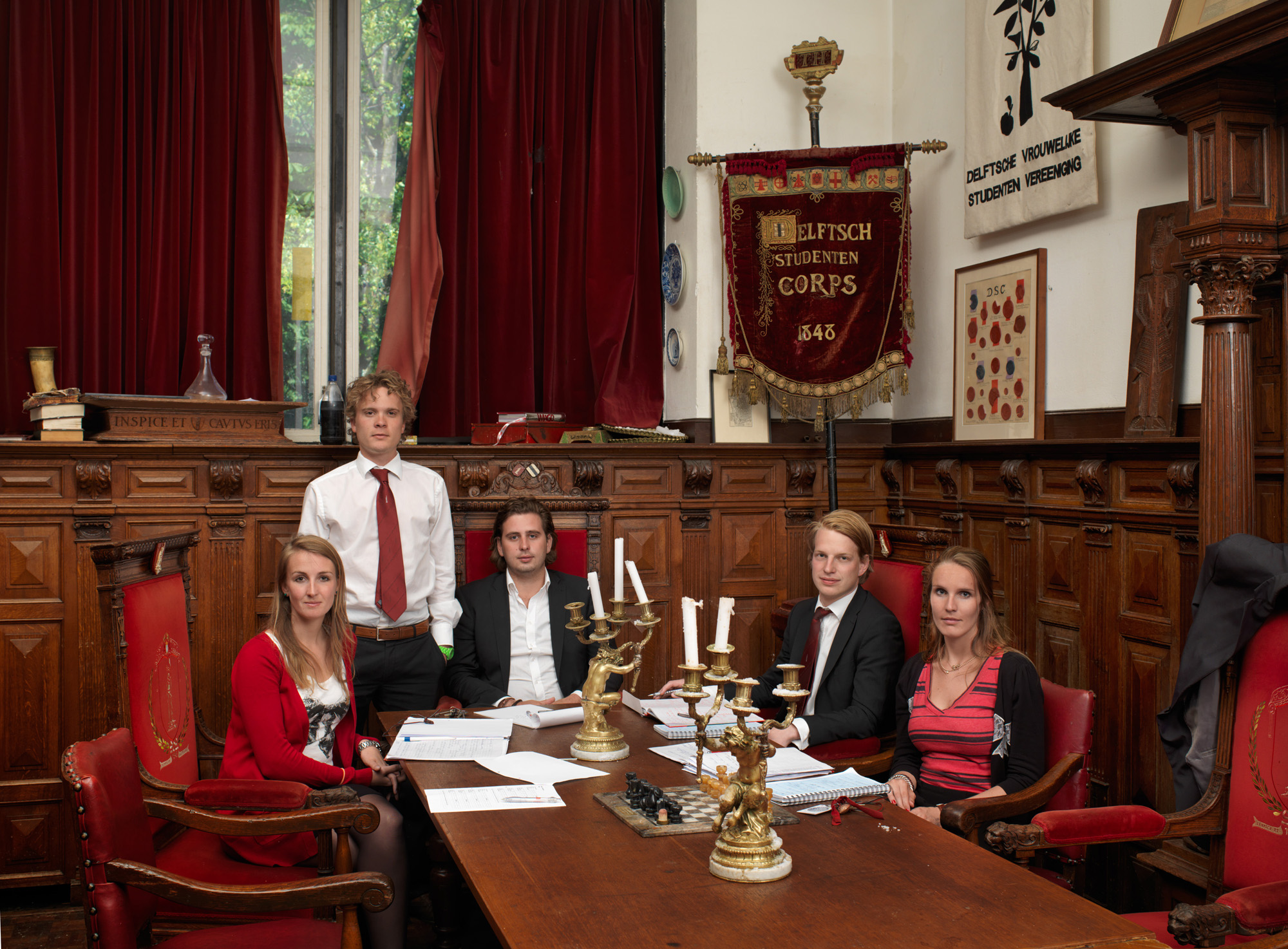 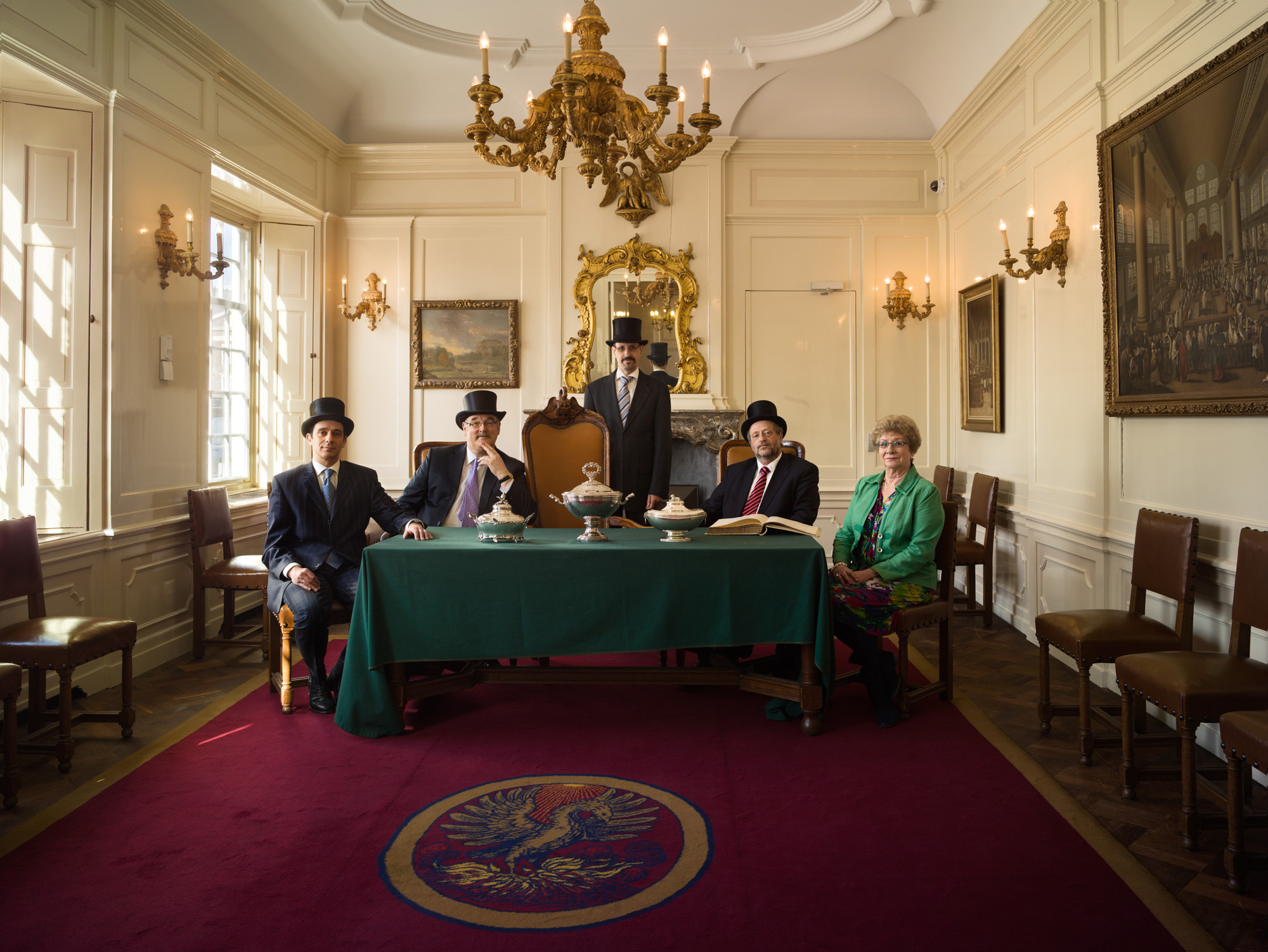 What would the Netherlands be without its consultative culture? Without its world-famous ‘polder model’? From 14 June to 7 September, Huis Marseille, museum for photography in Amsterdam, is showing more than thirty group portraits that Taco Anema made of the administrative boards of Dutch non-profit organisations. Together these photographs provide an outstanding illustration of this country’s administrative culture. Coffee pots, biscuits, and impersonal meeting rooms form recurring themes. The administrative boards that Anema photographed fall into the same iconographic tradition as the 17th-century portraits of governors and city militia companies for which Dutch painting is famous. Today’s boards are made up of people from every level of society, independent of social, religious or geographic background, and newcomers to the Netherlands have embraced this phenomenon to a striking degree.

Who amongst us is unfamiliar with the 17th-century Dutch tradition of painting a meeting? The well-known writer and historian Annie Romein Verschoor called such Regents’ portraits ‘the most penetrating, immediate, and sublime depiction of the bourgeois ideal that the Dutch possess.’ What this ‘bourgeois ideal’ constitutes in practice is harder to say, but the contemporary group portraits of Dutch administrative boards that photographer Taco Anema made over the last few years – varying from the board of the Anne Frank Foundation to that of the Voice of Afghan Women Foundation – do, indeed, have something in common. Every one of these boards has something quintessentially Dutch about it, even when the board is made up of relative newcomers with foreign backgrounds promoting the interests of their own compatriots and culture. They demonstrate the fact that in the Netherlands the idea of formal consultation is strikingly self-evident.

The ‘polder model’ in photographs of administrative boards

After Taco Anema completed his earlier series, Honderd Hollandse Huishoudens (2002–2009) – exhibited in Huis Marseille in 2009 – and was searching for a new subject with which to reveal the nature of Dutch culture, he became inspired by the Dutch idea of the ‘polder model’: the way in which the country’s political and administrative culture is characterised by extensive mutual consultation and a search for consensus. Anema made group portraits of the boards of 85 non-profit organisations, varying from a mosque, a student society, a football club, a Muslim women’s organisation, and a Japanese cultural foundation, to the illustrious Industriële Grote Club located on Dam Square at the heart of Amsterdam. Taken together they form a representative cross-section of the population of the Netherlands between 2009 and early 2014.

Boards as a form of emancipation

So why do societies, foundations and other non-profit organisations form in every layer of Dutch society? Taco Anema’s group portraits show how they fill the spaces left between government and business. The story of Jamila Talla, for instance, makes it clear how conference culture is one of the building blocks of Dutch society. As an Afghan refugee, Talla spent years going to every possible kind of organisation to present ideas for helping her companions in adversity. She was offering considerable expertise: as a UNICEF worker in Mazar-i-Sharif she had run an aid programme for women and children that covered the nine northern provinces of Afghanistan. In the Netherlands, however, no-one had time for her. It was only after she started her own foundation that she was taken seriously and became a ‘conversation partner’: after all, now she was speaking not merely as Mrs Jamila Talla, but as the chairwoman of the Voice of Afghan Women Foundation, whose express aim is ‘to support the rights of Afghan women and work to strengthen their resilience, independence and authority.’ Every foundation has its own stated aim. ‘To promote the entry into marriage of Sephardic Jewish orphans or young daughters with Sephardic Jewish men by the provision of donations; to promote Jewish social and cultural work in the broadest sense’ is the aim of the Santa Companhia de Dotar Orphas e Donzellas (founded in 1615), and the Diaconie van de Kloosterkerk (founded in 1918) sets out ‘to promote charity (doing good) and justice (doing right)’.

The special culture of Dutch meetings, also on film

Taco Anema’s portraits yield a picture of characteristically impersonal meeting rooms and, again and again, the same props: coffee and biscuits are the cornerstones of Dutch meetings. Another constant lies in the way the group members pose and look at the camera. These formations exhibit no hierarchy; they show the personality of the individuals as well as that of the group as a whole. The way these photos arose is also the subject of a film, based on all of Taco Anema’s portraits, which itself forms a dynamic component of the exhibition. Using sound, sequences, combinations and typography, this short film creates an environment in which special emphasis is laid on the specific characteristics of Dutch conference culture. A number of board members were interviewed especially for the film.

In a ‘Golden Age’ tradition, with a book and debates

Setting up one’s own foundation continues to impart the same sense of pride and independence that the rising bourgeoisie experienced in the Netherlands’ Golden Age. Again and again the Dutch have chosen to rely on this form, one that has been endlessly repeated and refined, and which has proved its worth over many generations. Taco Anema’s portraits of Dutch administrative boards thereby fall into the same iconographic tradition as the painted portraits of governors and city militia companies held in the collections of the Rijksmuseum and the Amsterdam Museum (which are soon to be given their own wing of the Hermitage).

Publishers nai010 are simultaneously presenting the book Overleg. Nederland bestuurt zichzelf by Taco Anema, which contains all 85 portraits. The book also contains texts by Els Barents, director of Huis Marseille, the writer Abdelkader Benali, the historian Caroline Hanken, and the art historian and former Rijksmuseum director Henk van Os. A number of debates will be arranged around the book and the exhibition.