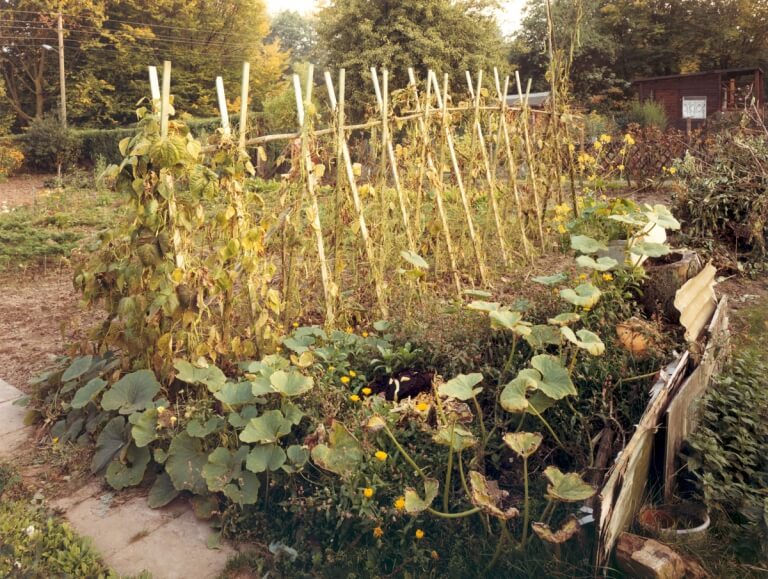 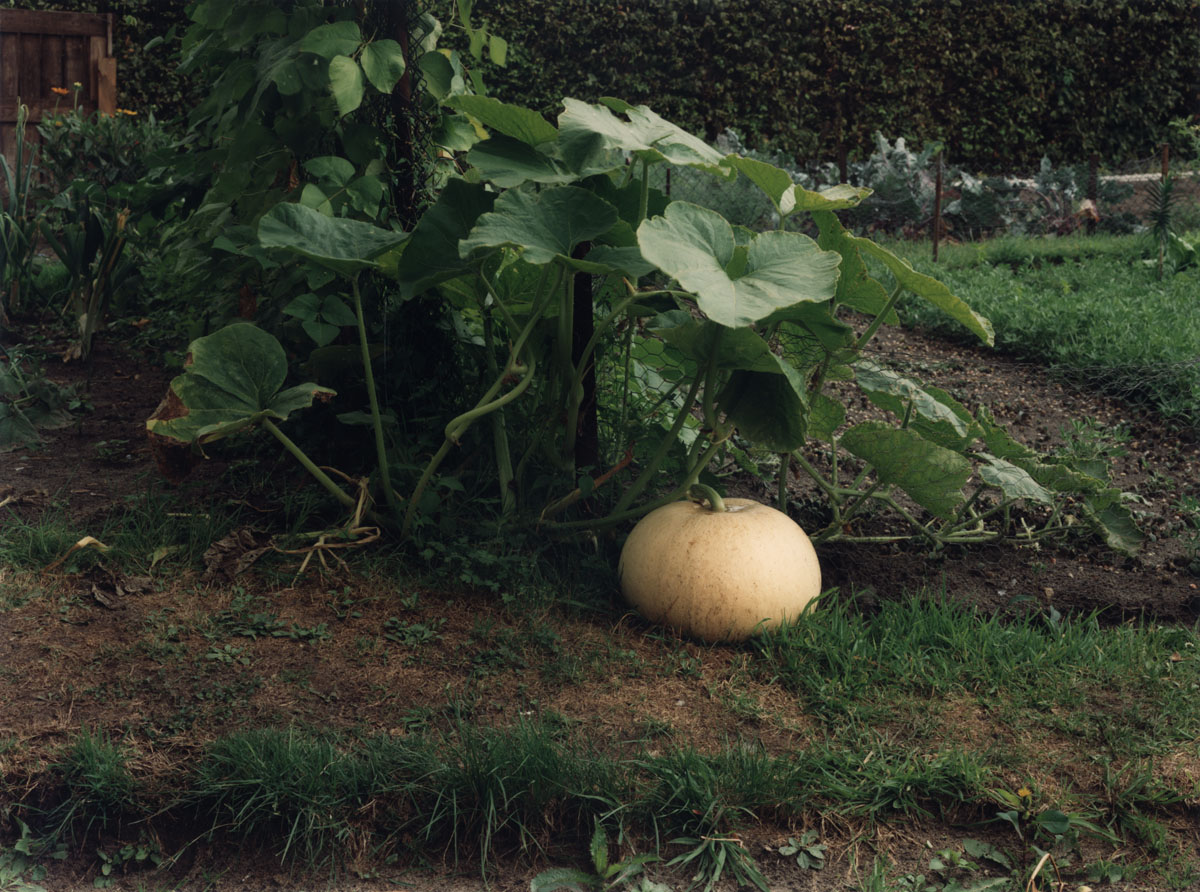 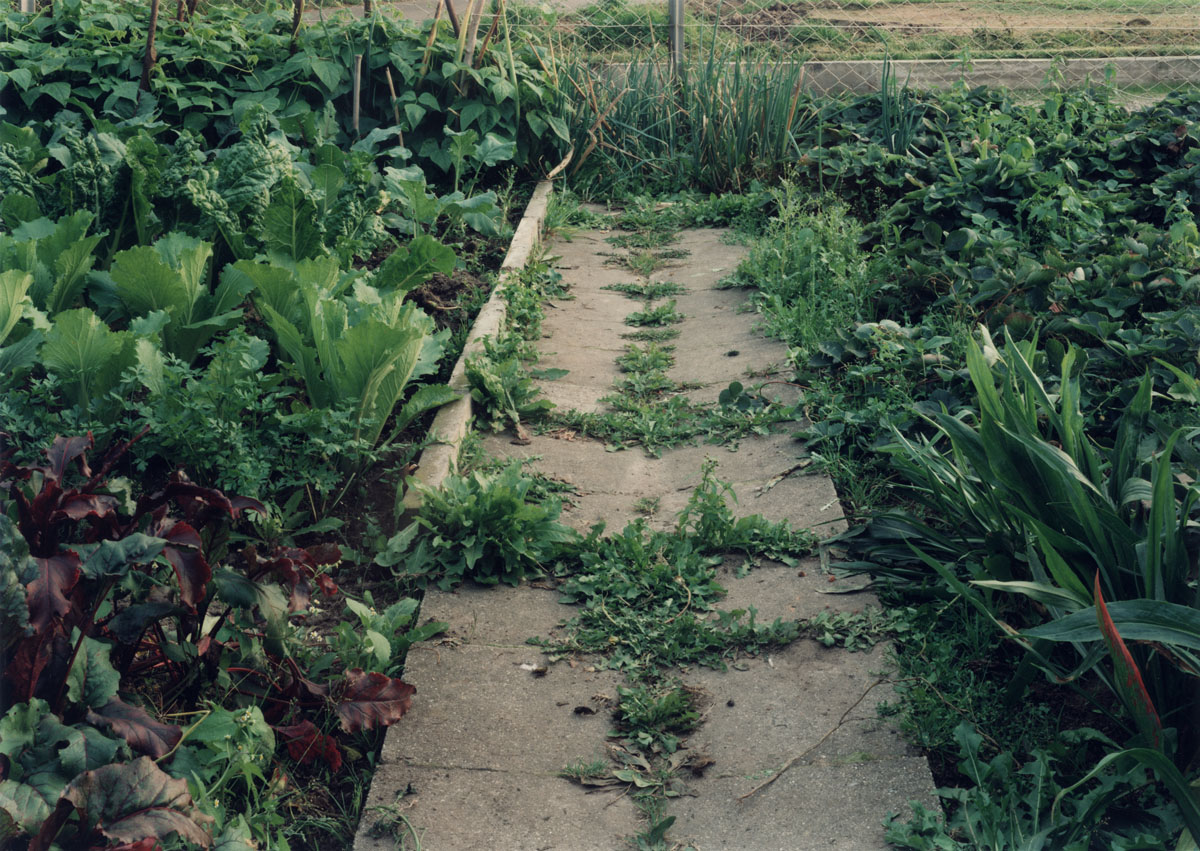 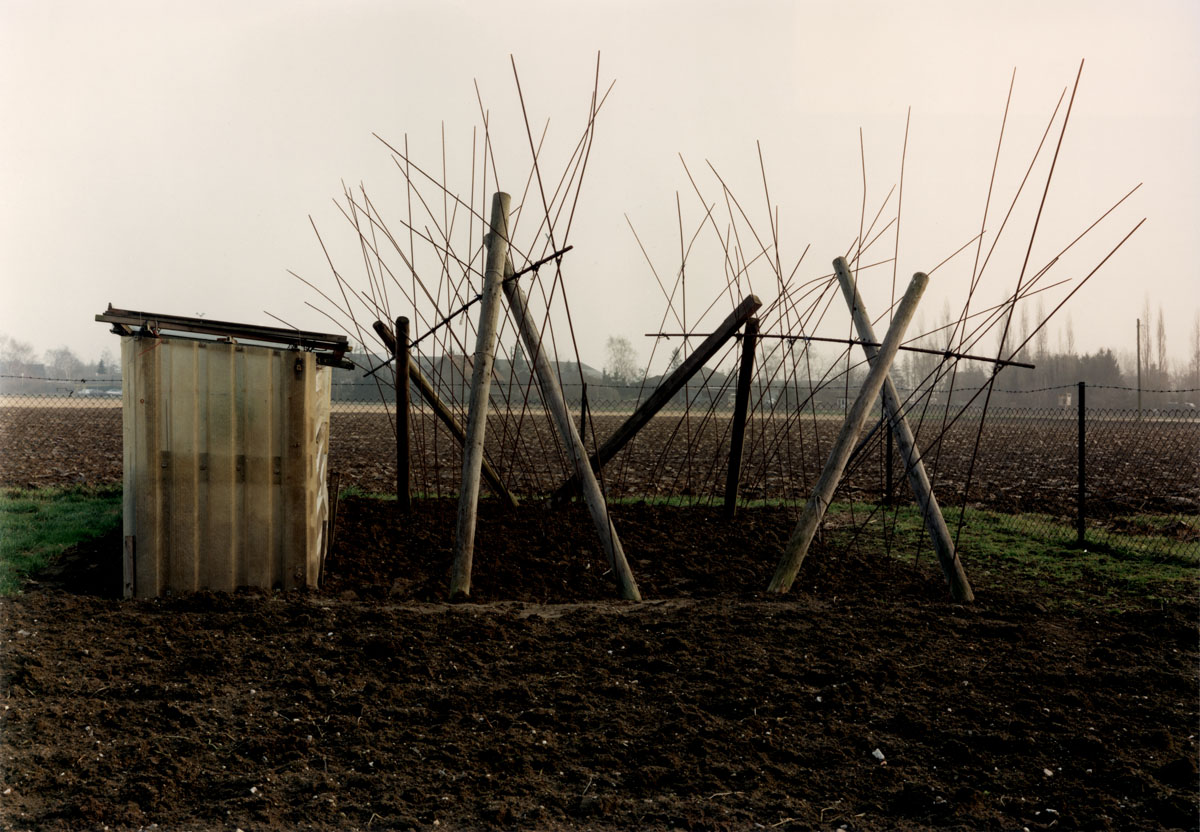 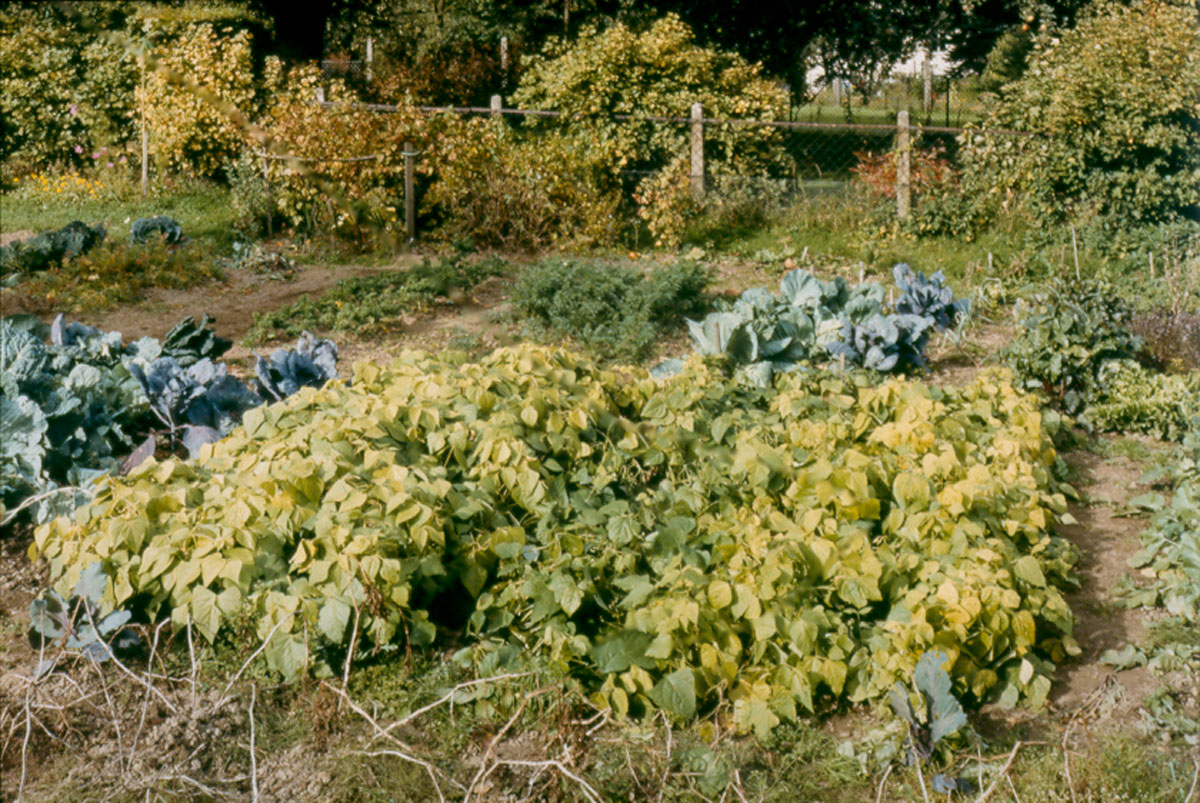 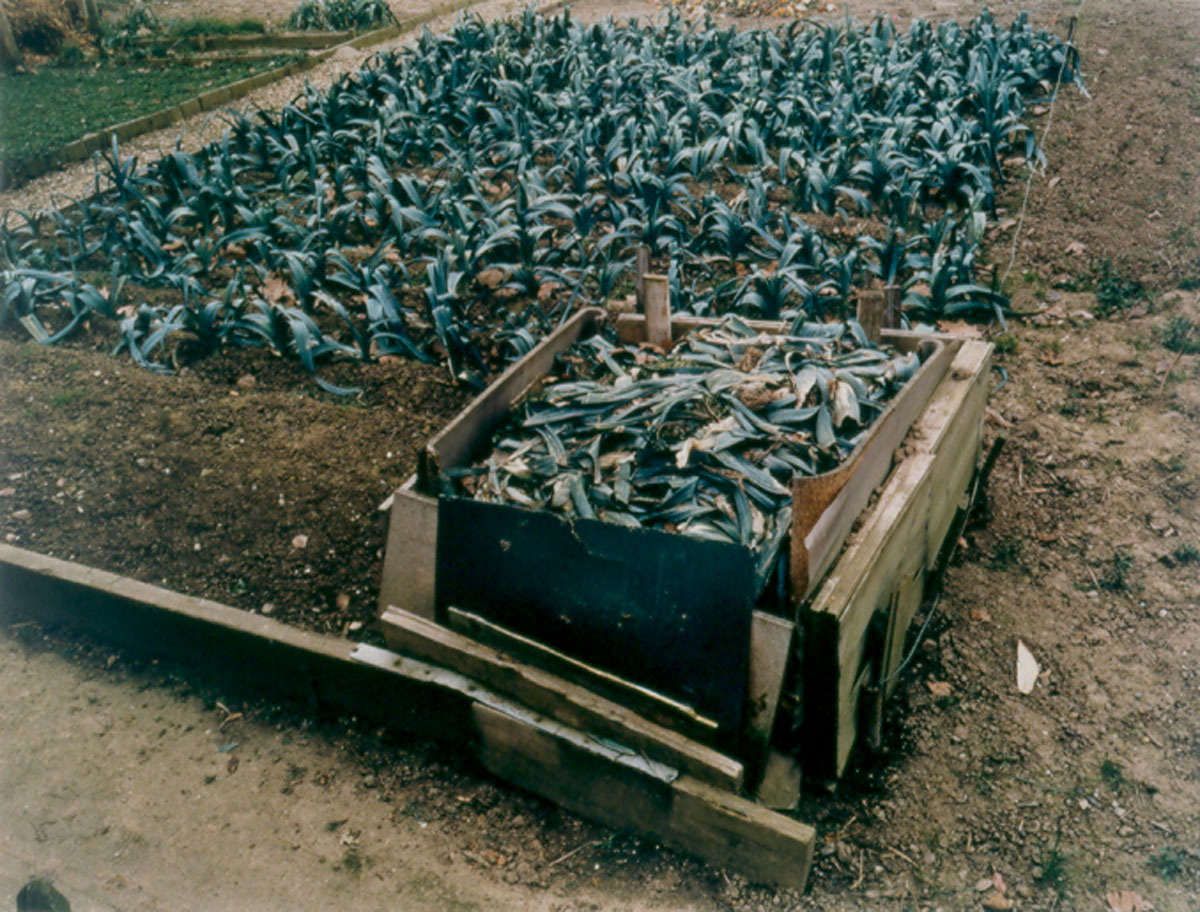 Woods, open fields, farmland, sheds, fences, compost heaps and vegetable gardens of kale, green cabbage, kohlrabi, leeks, lettuce, beans and a pumpkin. The photographs of Simone Nieweg display the seemingly disorganized look of what is called “grown in the cold ground” in Dutch – vegetables grown outdoors as opposed to those cultivated in glasshouses. Unlike the classical tradition in landscape painting, she does not seek a form of the picturesque or romantic landscape. Nor is the heroic or sublime landscape against which man appears insignificant a theme in her work. Simone Nieweg has chosen the neglected, ordinary landscape of the vegetable garden that extends into open land and fields, with woods further in the distance. These are precisely the spots where nature reveals the presence of man most vividly. Here, at the edge of city and countryside, the boundary between culture and nature, where gardens merge into fields or meadows, Simone Nieweg finds an inexhaustible source of subject matter. People are not directly visible here, but their traces are all the more so. This is the so-called Nutzlandschaft (utilitarian landscape), or more specifically, the Grabeland (wasteland), which in Germany is utilized in a slightly different way than in Holland. It comprises leftover pieces of land that have not yet been allocated by city planners and until then are free for private use. Simone Nieweg has sought out these fallow bits of land for about twenty years, initially in the area around Bielefeld where she grew up, later in the surroundings of Düsseldorf , the land of the Niederrhein, where she now lives.

For centuries, the kitchen garden has skirted all forms of fashion or aesthetic gratification. It is precisely here, in this terrain vague of metropolitan culture, at the point where strollers turn back toward the city or quicken their steps toward the woods ahead, that Simone Nieweg chooses to find her motifs. In the ground glass of her camera (in which an image appears upside down) she manages to introduce a hitherto unperceived order and structure. She makes no moral judgements, but observes, analyzes and structures. With her passion for the landscape of the vegetable garden, she no more walks the beaten path of landscape painting than landscape photography.

On her numerous walking tours she follows no traditions – simply footmarks along farmland, open fields, pastures, meadows and gardens. Places where she has already been many times before. The light, the weather conditions, and the time of the year lead her to the spot where she takes a photo at that moment with great precision.

Simone Nieweg’s first foreign museum exhibition has additionally been reason to show a selection of Dutch photographs of vegetables grown in the cold (and the warm) ground. Hans Scholten photographs very specific areas indeed, areas which lie between the city and countryside. He finds these pieces of no man’s land not just in the Netherlands but all over the world. They are “terrains vagues”, landscapes where man was once present but where nature has slowly reclaimed its grip. No more than Simone Nieweg does Hans Scholten want to comment upon these areas; he chiefly wants to impart the feeling of this landscape as space. His use of richly contrasted, monumental black and white photography very definitely elicits a feeling of struggle between countryside and city, whereas with Simone Nieweg man and nature seem to coexist more harmoniously. The same harmonious, concentrated focus on the micro landscape can be found in the poetic photographs that Laura Samsom-Rous has made of trees and gardens. The greatest specialist in this area, however, is photographer Wout Berger; his photographs of glasshouses are one of a kind. He proves that the straightforward miniature cosmos of the nurseryman differs from the viewpoints of classical art in all respects, especially because the horizon in the photograph is above the actual horizon. Han Singels, finally, has followed in the footsteps of Paulus Potter and the artists of the School of the Hague, photographing the Dutch landscape with especial emphasis upon its cows.