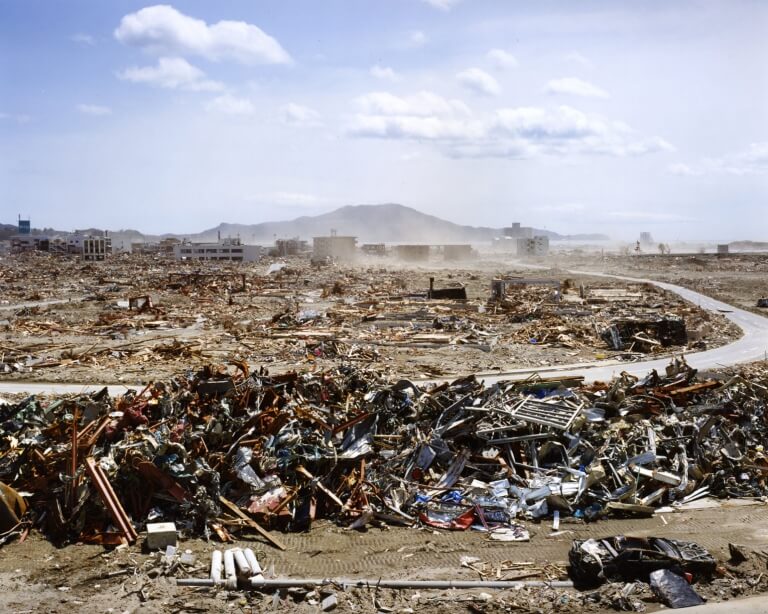 In 2002 the Japanese photographer Naoya Hatakeyama presented Blasts, a series of photographs of explosions in an open-cast limestone mine, in Huis Marseille. This exhibition made a strong impact, not least because the photographer succeeded perfectly in combining harmonious photographic compositions with the violently destructive power of dynamite. Since then, beautifully aesthetic images of the terrible powers we routinely deploy to shape nature to our will have become Hatakeyama’s trademark. His photographs of the Westfahlen mine in Ahlen (2003/2004) illustrate this very well. The moment that a factory hall is blown up and hangs suspended in the air before losing its rugged profile for ever is captured perfectly: it is like watching a living creature being brought slowly to its knees. Naoya Hatakeyama is unique in his ability to create such precise, refined photographs of moments at which such huge and destabilizing forces are at work. He also photographed the recent tsunami in Japan, and the destruction that this cataclysmic wall of water brought about in his own birthplace, Rikuzentakada in Iwate. These are images of terrifying emptiness: a vast expanse of nothing. All three themes are included in the exhibition Natural Stories. In collaboration with the Metropolitan Museum of Photography in Tokyo.

Naoya Hatakeyama (1958) was born in Iwate prefecture, Japan. He graduated from the School of Art and Design at the University of Tsukuba in 1981, and gained his Master’s degree there in 1984. He is one of Japan’s most prominent photographers and has also established an international reputation. In 2001 he represented Japan at the 49th Venice Biennale. His publications, which are artworks in themselves, include Limeworks, 1996; Atmos, 2003; Zeche Westfahlen, Ahlen, 2004; Two Mountains, 2006 (with Balthasar Burkhard); and Scales, 2007.