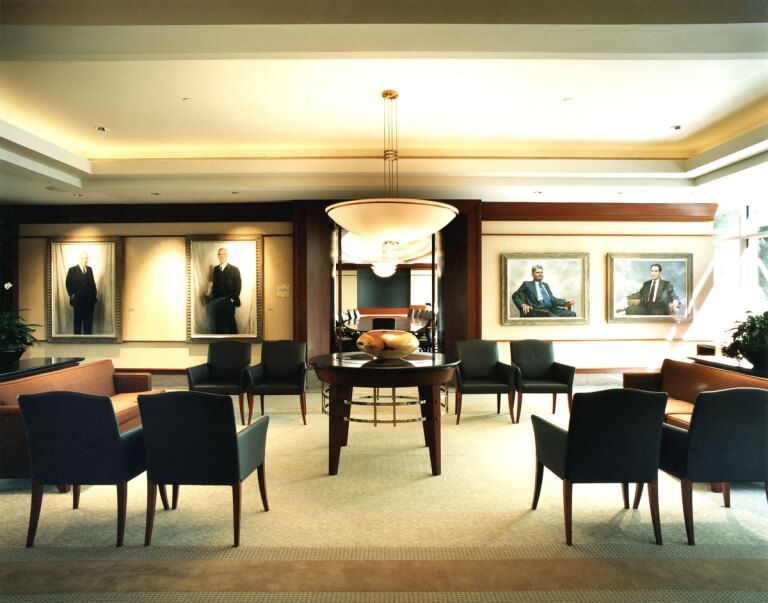 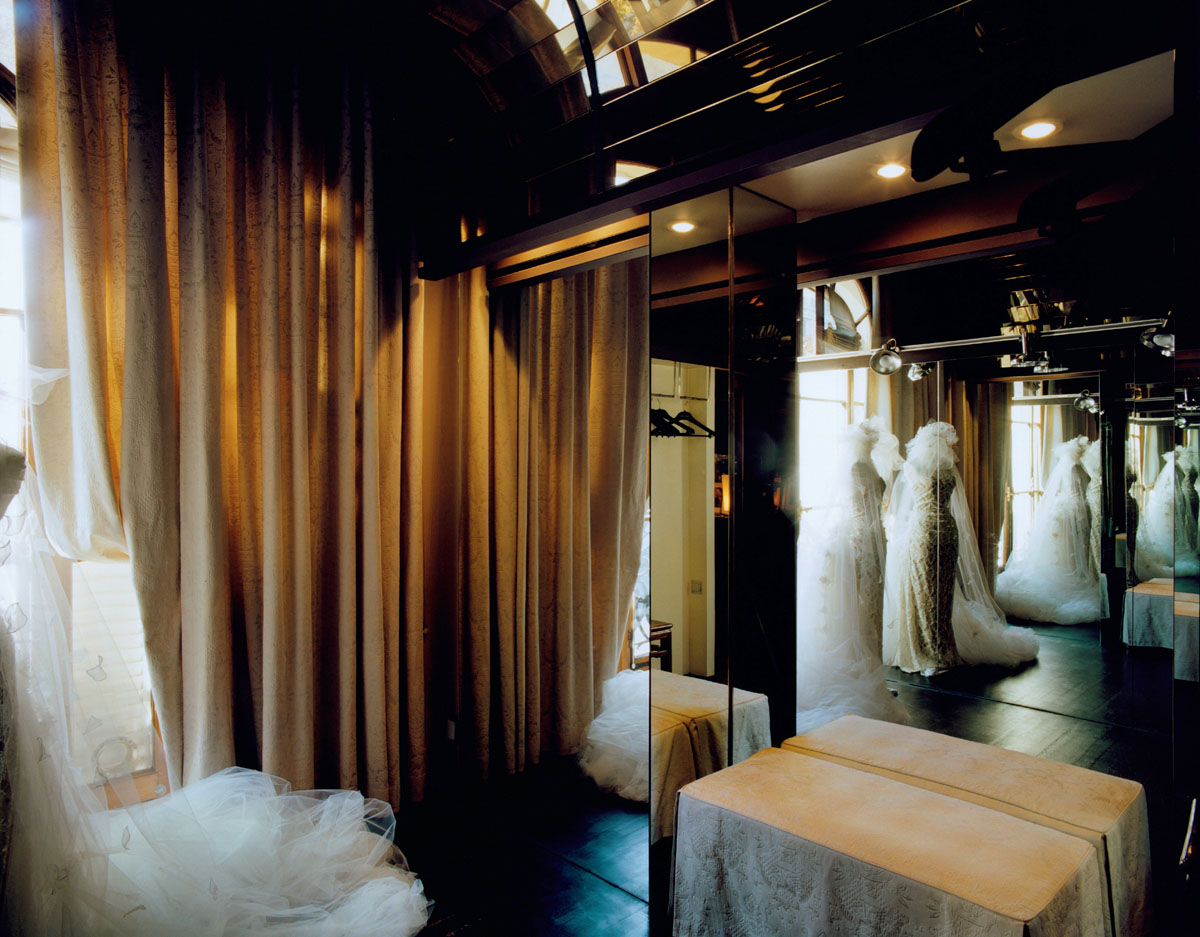 The work of Dutch photographer Jacqueline Hassink is the result of a well thought out plan. Accordingly her photo series of the centres of economic power, usually symbolised by the conference tables of the Boards of Directors of large multinationals, go way beyond the incidental nature that is inherent to photography. The poetry, the charm, of the chance encounter, which can equally give rise to a surprising and unusual image, is present, but is rather the exception. Photography as an ‘art of living’ and the virtuosity that is peculiar to an impulsive way of looking are not characteristics that can account for these large colour photos of what in themselves are rigorously designed interiors. It is sooner the opposite.

The long and difficult road that Jacqueline Hassink has had to travel in order to reach her goal is reflected in the great number of rigorously annotated facts that she painstakingly communicates to her public. They are unmistakably part of the work, as explanatory notes, and also as press releases and statements. This contributes to the veil of mystery and suspense surrounding the photos. Of course, they are also exposures of a world not generally known. Yet the keywords for this work, such as strategy, registration, observation, perseverance and ‘the patience of an angel’ belong for the most part in the cool category.

The adventuresome character that this large project undoubtedly also contains can be found at most in the title – but not, at first sight, in the images themselves. Seeing the heavy furniture and materials in combination with the symmetrical arrangement of these conference rooms is more likely to lead to a slight feeling of disappointment. Only after observing the iron sequence in which those dozens of conference rooms of the world’s largest concerns follow upon one another – and the minute details in which they differ – does one becomes aware of the subtle force of this project.

Mindscapes (1998-2002) is the second theme that Hassink launches in continuation of her skeleton concept of the table as a metaphor of power. The tables of the law, family life, and the divine or heavenly will undoubtedly come up for scrutiny later on. Earlier, Jacqueline Hassink had realised a series of double photos in [*caps here? Female Power Stations]female power stations: Queen Bees published in 1999. Here she investigated the chiefly ostensible – and occasionally great – contrasts between the worktable at the office and the dining table at home. Between 1996 and 1998, she photographed each of these tables belonging to fourteen of the 51 female top managers that the world possessed in the year 1997, according to Fortune magazine.

In Mindscapes Jacqueline Hassink states that she wants to investigate the boundaries between the private and public domain in both Japan and United States. [*Hi Els, I moved these sentences around here, please check & see if you agree.]Her experience with the Queen Bees project clearly has influenced her choice of approach here. She borrows the title Mindscapes from anthropology.[1] As a guiding line, she mentions the influence that the information society has, and has had, on what until only a few years ago was a very strict separation between work and private life. Since that time, perhaps, the impact of these economies has lessened. Despite all economic fluctuations, the contrast between Western and Asian culture – reduced here to the nerve centre of the economy, the terrain in which they presumably resemble each other the most – remains an interesting given.

Little by little, Jacqueline Hassink breaks the project down into different targets and target groups. Unmistakably, Mindscapes is her largest and most complex project to date. She also uses a scientific approach in the categorisation and differentiation of themes. In a statement for the Mindscape project made in April 1999 she distinguishes six subprojects[2] that she intends to carry out in Japan and United States. In the United States these are: 100 CEO’s-10 Rooms (1998-2001)[3], Personal Coffee Cups project (2000-2001), VIP Fitting Room project (2000-ongoing), Cubicles (2001). For Japan, 100 CEO’s-10 Rooms and VIP Fitting Rooms are likewise on the program, but she also investigates a typical Japanese phenomenon in Training Center for Salaryman (2000).

In the statement, however, she sums up even more topics she intends to investigate in order to register the effects of the information society: employees, President Clinton, the Apple computer company, plants or trees. Although these topics have not yet been reflected in a concrete project, the iron consistency that Jacqueline Hassink has demonstrated in shaping her magnum opus suggests that this most assuredly is yet to come. But there is one strict condition that applies to her entire body of work: There are no people in the photographs.

The Symmetry of Diplomacy is title of an early, two-part conceptual photographic work in which the Dutch visual artist Ger van Elk poked fun at the stiff diplomatic and political etiquette that held sway during the mid ’70s. Sitting at the left or right side of a golden table is an identical man in a blue suit, as a diplomat. For insiders, this is a self-portrait, with left and right as mirror images of each other. Twenty-five years later, the irony of this visual analysis is blatantly obvious. The tone and atmospheric setting, however, are out of date, and nowadays would probably be considered the realm of the cartoon. This example shows how much has changed in the use of the medium of photography. Even though the messages of Van Elk and Hassink might sometimes be identical, the form and the way in which the images have been realised are worlds apart. What is perhaps most striking is that the feigned impropriety with which Van Elk qualifies the somewhat over-formal diplomatic protocol is no longer understood so much in terms of the image, but in terms of the joke. At present, the visual nimbleness that was still to be found in the vanguard of art around 1970 has been marginalised.

The concept that many photographers employ nowadays is no featherweight. It is serious, well considered, and its language of form aims at achieving maximal expression. In this statement oriented, large format photography, the work of Jacqueline Hassink stands out for its exceptionally powerful consistency and its structured approach. Another photographer who makes use of a solid concept in her portrait photography is Rineke Dijkstra – even though she manages to achieve such a natural expression that this is slightly forgotten.

In her method of working, Hassink follows the tradition of objective and registering photography as developed by three successive generations of German photographers – Carl Blossfeldt, August Sander and Bernd & Hilla Becher. Hassink similarly makes typologies, even though these are more loosely structured than those of Bernd & Hilla Becher. The characterisations and comparisons that she makes of the tables of the captains of industry are closer to the work of Candida Höfer than to that of her instructors, the Bechers. The project Candida Höfer made in 2000 and 2001 on commission from the city of Calais exhibits the greatest affinity with the working method of Jacqueline Hassink. She looked up the 12 places in the world where an example of the large bronze sculpture group by the French sculptor Auguste Rodin, The Citizens of Calais, can be found. Besides Calais, it is located in Copenhagen, London, Washington, Tokyo etc. It is surprising how much of an influence the surroundings prove to have on the effectiveness of this sculpture group.

Despite the fact that the working terrain of Candida Höfer’s themes, such as libraries, banks and other public buildings, is formulated much more loosely than that of Jacqueline Hassink, several parallels can be indicated in this work. In both situations, there is a great affinity with architectural photography – without making use, however, of the strict, formalised language so typical of that field. The coloration of the photographs of interiors in particular is especially strong. There is a great preference for monumental architecture, which gradually shifts to a simpler idiom. With both of them, this self-imposed specialism has led over the course of time to an extremely professional, but much looser and lighter way of photographing in terms of form. With Jacqueline Hassink, this especially applies to the VIP Fitting Rooms – of the Empress of Japan at Fendi and Hanae Mori and of Chanel in New York – in which she appears to be offering a preamble to her capabilities of capturing an image of much less stern places in a very convincing manner. Perhaps this is a promising upbeat to the sublimated image of the heavenly table awaiting us. In this self-formulated mission Jacqueline Hassink is aided by two extremely well developed attributes – a sense of colour and a sense of atmosphere.