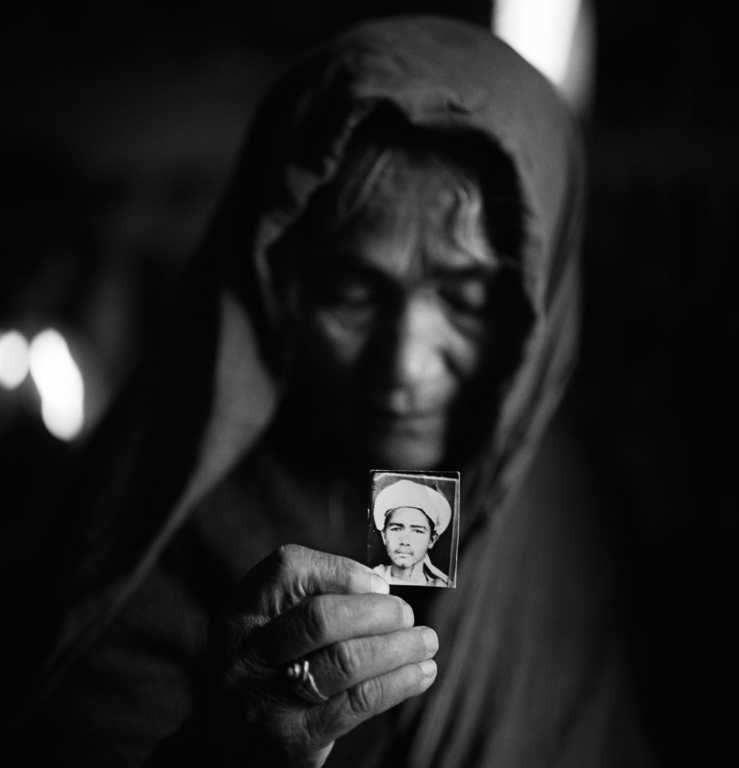 This fall Huis Marseille will be presenting, for the first time, a large retrospective on the work of American photographer Fazal Sheikh (New York, 1965). Sheikh is no stranger to the Netherlands. In his previous exhibitions held at the Nederlands Fotomuseum (1997, 2001) and during the photograhy festival Noorderlicht (1997), he showed his impressive portraits of homeless people and refugees in African and Asia. These exhibitions were the start of a substantial career. In monumental and tranquil black-and-white portraits, Sheikh gives names and faces to the people in refugee camps in Kenya, Tanzania and Pakistan. He also records their stories in extensive statements. Fazal Sheikh now has well-developed body of work. The exhibition at Huis Marseille also includes his most recent series of photographs, taken in India: of women and children forced to survive under dire circumstances. This retrospective has been realized in close collaboration with the artist, curator Carlos Gollonet and Fondación MAPFRE in Madrid, which organized the tour.

Fazal Sheikh presents these people who have fled their countries as individuals, thus with respect for their dignity, and not as symbols of the political conflicts in which they have become victims. In order to achieve this and gain their trust, he spends a great deal of time with them. Only by doing that can he succeed in getting them to relax in front of the camera. The connection established with the photographer is reflected in the open gazes of most of his subjects Fazal Sheikh has taken inspiration from others, such as the German photographer August Sander (1876–1964) who, during the time of the Weimar Republic, made plain black-and-white portraits of people from various professions and levels of society. Over the years Sheikh has come to concentrate more and more on the face; the landscape and surroundings have given way to a simple white sheet as background. Due to his experience, his greater sense of trust and precision, he has occasionally been able to get so close to his subjects that his own reflection can be seen in their pupils. Sheikh considers the stories told by these people during his visits with them to be an essential part of his photography. In 1998 he began to collect these statements in order to relate them directly to his photographs. The nearly serene image stands in stark contrast to the often violent character of the narrative. In 2005 Fazal Sheikh was granted two major awards: the MacArthur Fellowship and the Henri Cartier-Bresson Grand Prix. And in 2008 he was nominated for the prestigious Deutsche Börse Photography Prize. In recent years his work has been shown at the Fondation Henri Cartier-Bresson (Paris), the Museum of Contemporary Art (Moscow), Fotomuseum Winterthur, the Tate Modern (London), The Art Institute of Chicage, the International Center of Photography (New York) and The Metropolitan Museum of Art (New York). Together with guest curator Carlos Gollonet, we have made, from the exhibition held at the Fundación MAPFRE this past spring, a selection of work geared to the more intimate rooms of Huis Marseille. In addition to a compact group from the early series Kenya (1989–1991) and South Africa (1989), there will be photographs from six other series. 2/2 For A Sense of Common Ground, East Africa (1992–1994) Fazal Sheikh spent three years travelling among the different refugee camps in Kenya, Malawi and Tanzania to which hundreds of thousands of Rwandans fled during the genocide in their country. The Victor Weeps (1996–1998) came about while Sheikh was travelling in Nepal, Bhutan and Pakistan during 1996. Along the border between Pakistan and Afghanistan, he came across settlements and camps where more than a million Afghans had been living since the Russian invasion of 1979. As a sequel to A Sense of Common Ground, Fazal Sheikh produced A Camel for the Son, Somalia (1992-2000) in three refugee camps in the northeastern part of Kenya, where Somalians had ended up when fleeing the civil war in their country. How one of them was faring in the Netherlands can been seen in his series Ramadan Moon (2000), commissioned by the Nederlands Fotomuseum in Rotterdam. Here he portrays Seynab Azira Wardeere, who has left Mogadishu for Amsterdam, as she dreams of her homeland during Ramadan. Fazal Sheikh made his most recent series of photographs in India. Moksha (2003–2005) is about the northern city of Vrindavan, dedicated to the Hindu diety Krishna. This place is known throughout India as a retreat for widows. In Ladli (2005–2008) he again deals with the subordinate role of Indian women, in this case of poor young girls who are often forced to start working at an early age or sent out to the streets where they end up as prostitutes.

The exhibition will be accompanied by an extensive publication in English, available at Huis Marseille. Texts by Carlos Gollonet, Liz Jobey and Eduardo Cadava. Fondación MAPFRE, Madrid,
2009, € 40.