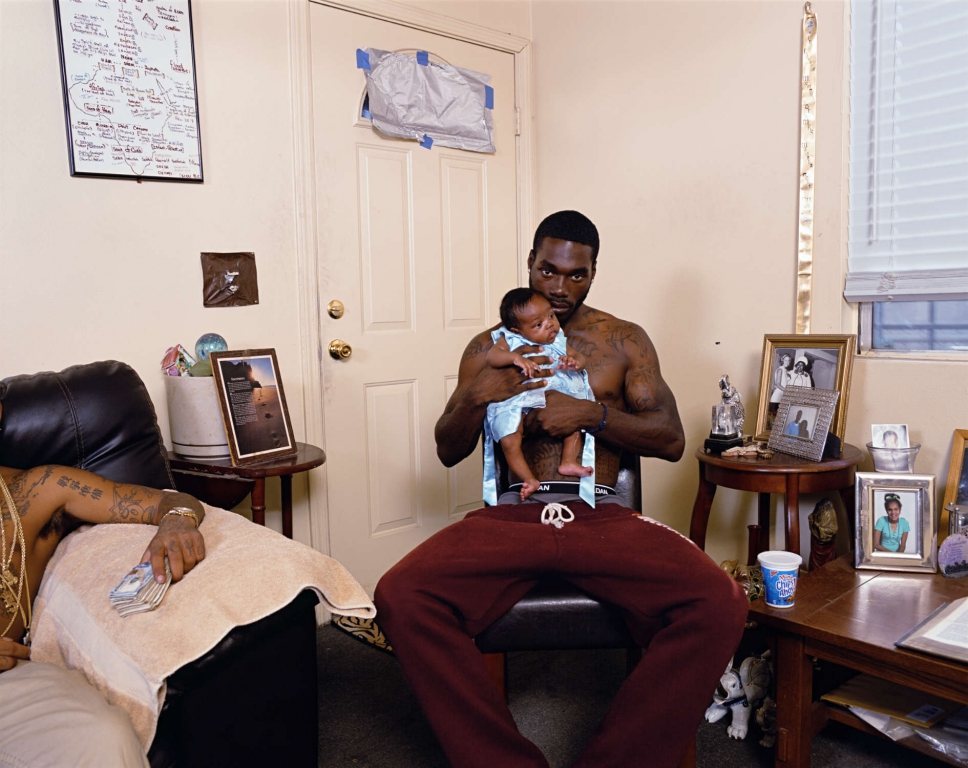 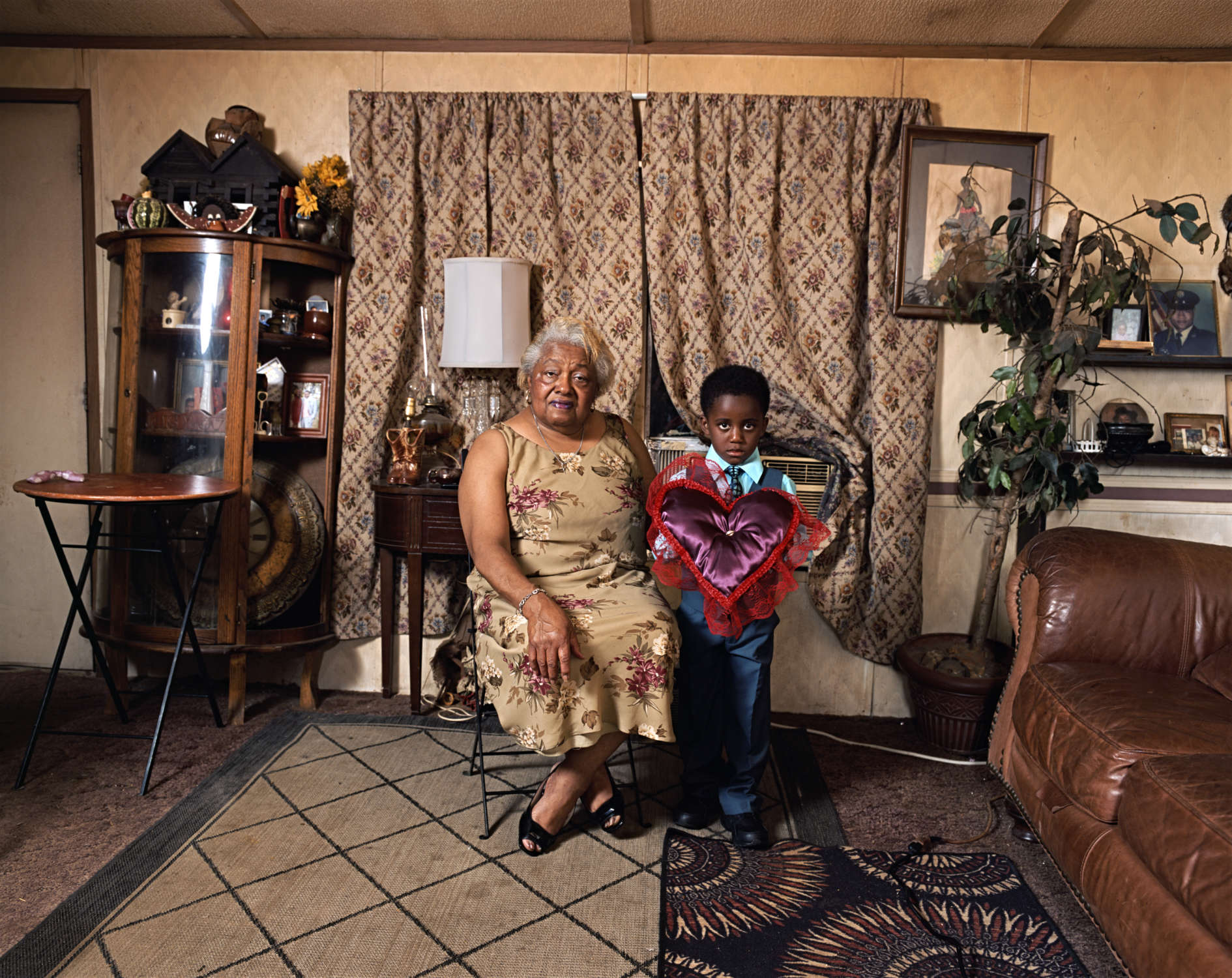 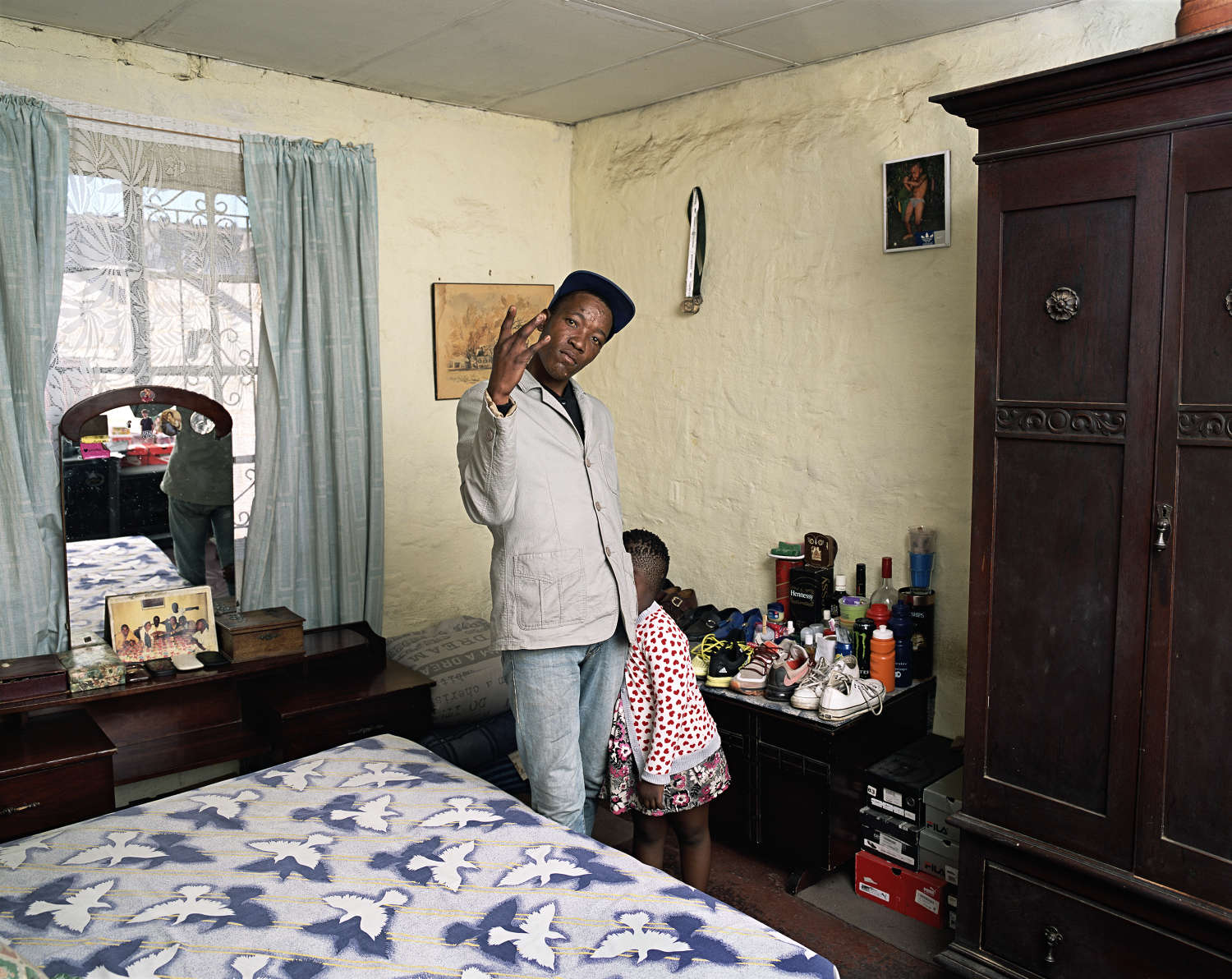 The American photographer Deana Lawson (Rochester, 1979) is acclaimed as one of the most compelling photographers of her generation. In her work, which has been compared to that of Diane Arbus, Jeff Wall and Carrie Mae Weems, Lawson blurs the boundary between fact and myth. Over the last fifteen years she has developed a visual language that could be characterized as intimate ‘environmental portraits’. Her subjects are positioned in settings brimming with details of great iconographic significance that contribute towards the narrative of the image and evoke the purported identity of the central figures. The exhibition in Huis Marseille is the first large solo exhibition of Deana Lawson’s work in Europe.

Deana Lawson, who graduated in 2004 as a Master of Fine Arts in photography at the Rhode Island School of Design, grew up in Rochester, upstate New York. The city housed the head office of the Eastman Kodak Company, where Lawson’s mother worked. Her father worked for Xerox and was also the family photographer. Deana Lawson has said that her family and their photo albums formed the basis for her interest in photography and her aesthetic, and her iconography is strongly inspired by the environment she herself grew up in.

Lawson’s first solo exhibition was held in 2009, in Syracuse, New York. In 2013 she was awarded a Guggenheim Fellowship which allowed her to expand her work domain beyond the United States and into Jamaica, Haiti, Ethiopia and the Democratic Republic of Congo. Lawson developed a unique and evocative visual language, full of autobiographical, historic and art historical references. Her work effectively forms a genre in itself, and she is raising photography to a higher level.

In 2017 Deana Lawson took part in the Whitney Biennial, an event organized since 1932 by the Whitney Museum of American Art to give a platform to America’s most promising and influential artists. In the two years that followed her work could be seen all over the USA – from New York to Chicago, San Francisco and Los Angeles. Her most recent solo exhibition, Planes, held in the Underground Museum in Los Angeles, forms the basis for this new exhibition in Amsterdam, together with a number of new works.

The black experience and diaspora

Deana Lawson’s work concentrates on black bodies located in the diaspora: in several American states, in the Caribbean, and in Africa. She examines what the diaspora means, not just in historical terms but also in material and emotional ones. Megan Steinman, curator of her exhibition in the Underground Museum, has said: ‘[Her works] are really meant to represent the breadth and depth of the diaspora, and what could be defined as a black universal experience, if one could even try to think about that.’

On her visits to Jamaica, Haiti and West Africa Lawson learned a great deal about rituals and spirituality. In many of these rituals the body is celebrated through decoration, and Lawson has applied this approach to the use of clothing, jewellery and accessories in her portraits. The details in her work have a function: they place the model on a pedestal, and they evoke a sense of recognition and connection in the viewer.

‘Deana Lawson’s people seem to occupy a higher plane, a kingdom of restored glory, in which diaspora gods can be found wherever you look: Brownsville, Kingston, Port-au-Prince, Addis Ababa,’ writes Zadie Smith.
In this sense Lawson’s work shares some ground with that of Carrie Mae Weems (1953) and Renee Cox (1960), whose work has also increased awareness of the status of Afro-Americans in the US, and that of Diane Arbus (1923-1971), who portrayed a variety of social groups in all their uniqueness and power.

Lawson feels a strong affinity with the circle of black artists associated with the Underground Museum, an institution founded in 2012 in Los Angeles by Noah and Karon Davis as an art gallery, film club, meeting place, music venue and discussion platform. The organization, which is run mostly by family members, focuses on ‘black excellence’. It has offered a self-evident context for Deana Lawson’s work.

Lawson’s photography has often been described as ‘highly staged’, outfits, objects, accessories and interiors are deliberately combined, leading her work to also be compared with that of Jeff Wall.

Plastic sofa sheets, net curtains, and models wearing brightly-coloured acrylic nails, braided hair and gold jewellery recur as stylistic motifs throughout her work, and for Lawson these symbols help to convey the meaning of the cultural identity she studies. ‘Typically, she photographs her subjects in cramped domestic spaces, yet they rarely look either vulnerable or confined. Outside a Lawson portrait you might be working three jobs, just keeping your head above water, struggling. But inside her frame you are beautiful, imperious, unbroken, unfallen,’ writes Zadie Smith in her essay in the monograph published in 2018 by Aperture.

Deana Lawson’s work also makes frequent allusion, consciously or unconsciously, to painterly principles. Her close attention to composition, colour and iconography gives her work a claim to a place in art history. Lawson uses formal elements such as lighting and positioning, which suggest intimacy and/or provocation, to strengthen her depiction of personal power and freedom of her models through their personal spaces.

Lawson often photographs people from lower socio-economic groups where, she says, she recognizes the settings she herself grew up in. She portrays them using a medium-format or large-format camera, capturing their dignity and grandeur in a way that lifts her subjects above their origins and daily circumstances.

Deana Lawson (1979) grew up in Rochester (NY) and lives in New York City. In 2004 she received a Master of Fine Arts in photography from the Rhode Island School of Design. In 2013 she was awarded a Guggenheim Fellowship. Since 2012 Lawson has taught photography at Princeton University. In recent years Lawson has developed into one of the most talked-about photographers of our time. Her exhibition in Huis Marseille is the first large solo exhibition of her work in Europe.