The First Round & Selected Works from the Collection 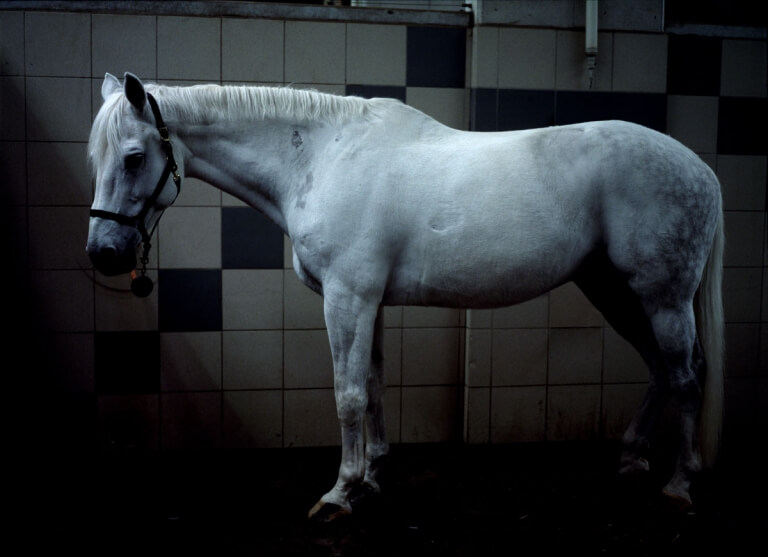 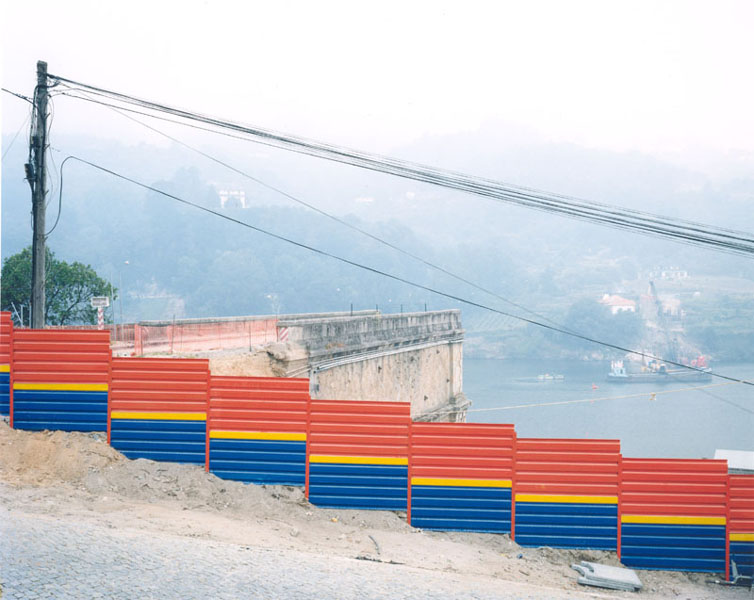 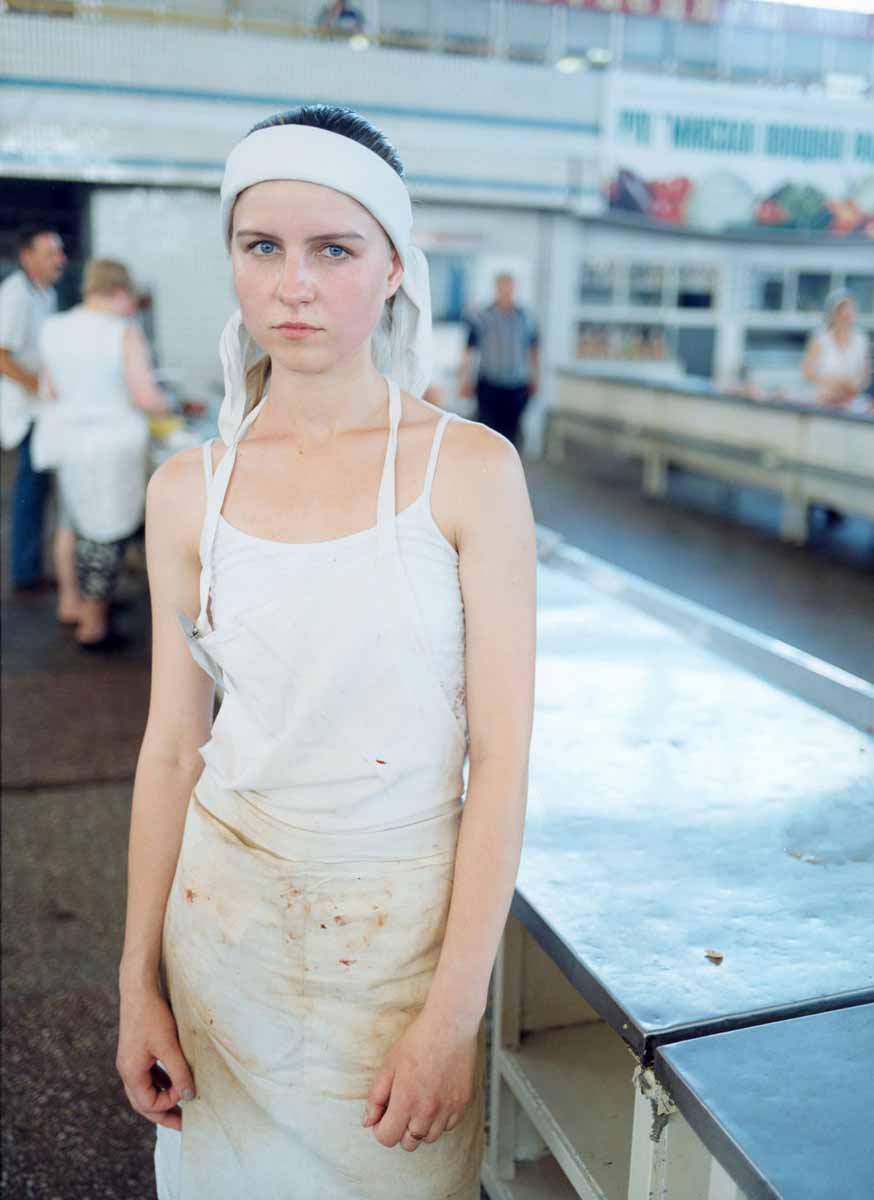 This summer Huis Marseille is presenting three young Dutch photographers in an exhibition entitled The First Round. Each represents a very striking position in photography. Their similarity lies in the fact that all three have embraced a theme and consistently developed it.

Charlotte Dumas (1977) makes portraits of animals. Using a monumental format, she has photographed police dogs and the last few years she has concentrated on creating an oeuvre of horse portraits. She graduated from the Rietveld Academy in 2000, and concluded her postgraduate work period at the Rijksakademie voor Beeldende Kunsten in Amsterdam in 2002. Charlotte Dumas looks for the specific character of animals in her portraits. She therefore spends a good deal of time with them in order to build up a relationship that slowly but surely allows her to make the most telling portrait. Intimacy with the animals is an essential part of her methodology. Both the police dogs and the horses of the mounted police have a very explicit relationship with people. On the one hand, they are trained to protect people; on the other hand, they must be able to attack or maintain order when necessary. This dualism – the animal as a model of both fidelity and menace – is a circumstance that intrigues Dumas. In Huis Marseille, she displays the portraits she recently made of horses at the mounted police. In the individual portraits and the mounted tableaux vivants she reveals how these horses embody both courage and vulnerability. The portraits also show the power, energy and elegance of these animals, which has rightly granted them the reputation of being noble animals and given them highly symbolic meaning. Dumas attempts to depict a timeless image of the horses that simultaneously contains the historic overtones of her subject matter. The concentration and the intensity with which people and animals work together can also be felt in these photos. With such an approach and the monumental execution of her photographs, Dumas is closer to the painterly than the photographic tradition.

Marco van Duyvendijk (1974) is a colourist pur sang. A subtle use of colour and a warm pallet characterize the photographs he made on his long travels through Eastern European countries. Van Duyvendijk graduated as a psychologist in 1999 from the University of Utrecht. As a photographer he is self-taught, and has been making photographs from an early age. After having lived for a year in Rumania upon graduation and not only learning the language there but primarily making photographs, he considers himself a photographer. His fascination for Eastern Europe began after the fall of the Berlin Wall in 1989 and the subsequent developments in those countries – the first major international events of which he was consciously aware and which quickly caught his interest as a teenager. His first love was Lithuania, where he stayed for half a year as an undergraduate. There lie the foundations of his extremely personal portraits of the people he meets along his way. In Rumania, he refined this into a specialism, with portraits of (street) children to whom he returns and visits every year. For Van Duyvendijk, personal contact with the subject is essential for the success of a photograph. This is also necessary because his manually operated medium-format camera obliges him to work at close range. Although Van Duyvendijk is often confronted with harrowing and for the most part hopeless situations, he never makes judgements in his photographs and the human aspect remains the essential factor. The photographs of Marco Van Duyvendijk are regularly published in newspapers and magazines, including the Nieuwe Revu and the Volkskrant. In Huis Marseille he is showing an overview of his work for the first time.

Gertjan Kocken (1971) makes photographs of landscapes, but he never selects these for their picturesque qualities. They are landscapes with a meaning. Kocken graduated in 1998 from the Royal Academy of Art in The Hague and received the Incentive Prize for Photography from the Amsterdam Fund for the Arts. He has photographed hangouts, places where prostitutes have sex with their clients, and the boundaries of psychiatric institutions (along railroad tracks). In Huis Marseille he presents for the first time a broad selection of his photographs of spots where major disasters have occurred, and where many people have lost their lives through a combination of human and technical error. At first sight, these photos are of landscapes in which there is nothing unusual, except perhaps that they are particularly unemphatic. The viewer is not forced to look in a particular direction and is free to gaze at the image randomly. Not one ominous reference to the disaster which occurred at that spot is present in the picture; the photograph was made long afterward. However, once you have read the names of the locations of the photographs, your view is coloured. The airport is not just any airport; it is Faro, where the Martin Air plane crashed. The calm sea beneath a blue sky is not just any bit of sea; it is the spot near Zeebrugge where the Herald of Free Enterprise sank. The green wooded mountainside conceals the Mont Blanc Tunnel where a huge fire reduced countless automobiles to ashes – the repair operations are still visible in the photo. This knowledge, combined with the fact that these photographs show the landscapes in what at first sight appears to be total innocence, produces an uneasy feeling and gives pause for reflection. Memory gains the upper hand over reality. Kocken once said in reference to this in an interview, “My work is about the difference between seeing and knowing, about the tension between the image on display and the facts known about that place.”

Since its opening in September 1999, Huis Marseille has had its own collection of photography. This collection has gradually built up throughout the years and currently comprises over 145 photographs. Small selections are regularly shown in Huis Marseille. The accent of the collection is on contemporary work of both Dutch and foreign photographers who represent the most important developments within photography. Nevertheless the guiding line for the collection, just as for the exhibition program, is quality and diversity; format and function are of lesser importance. The purpose of the collection is to exhibit it and bring it to the attention of the public. Many of the photos are monumental in character and are typified by a broad interpretation of the medium and an extremely varied use of photographic technique.