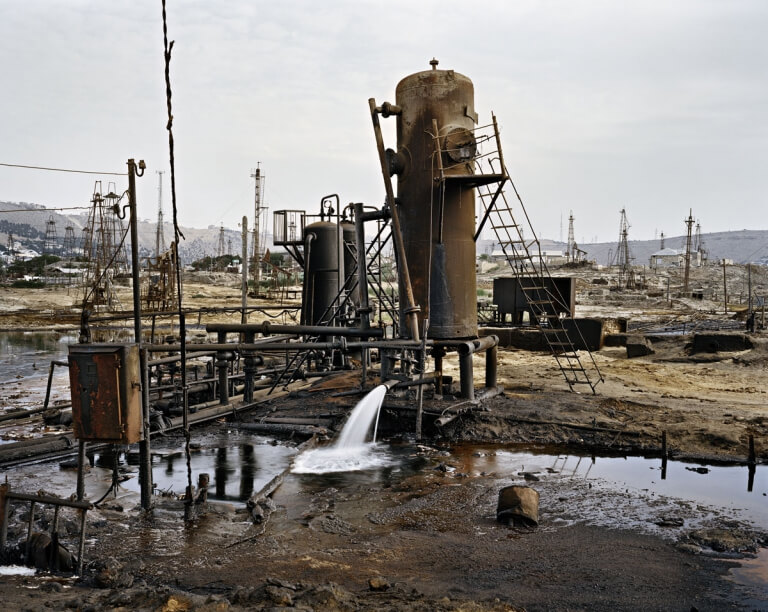 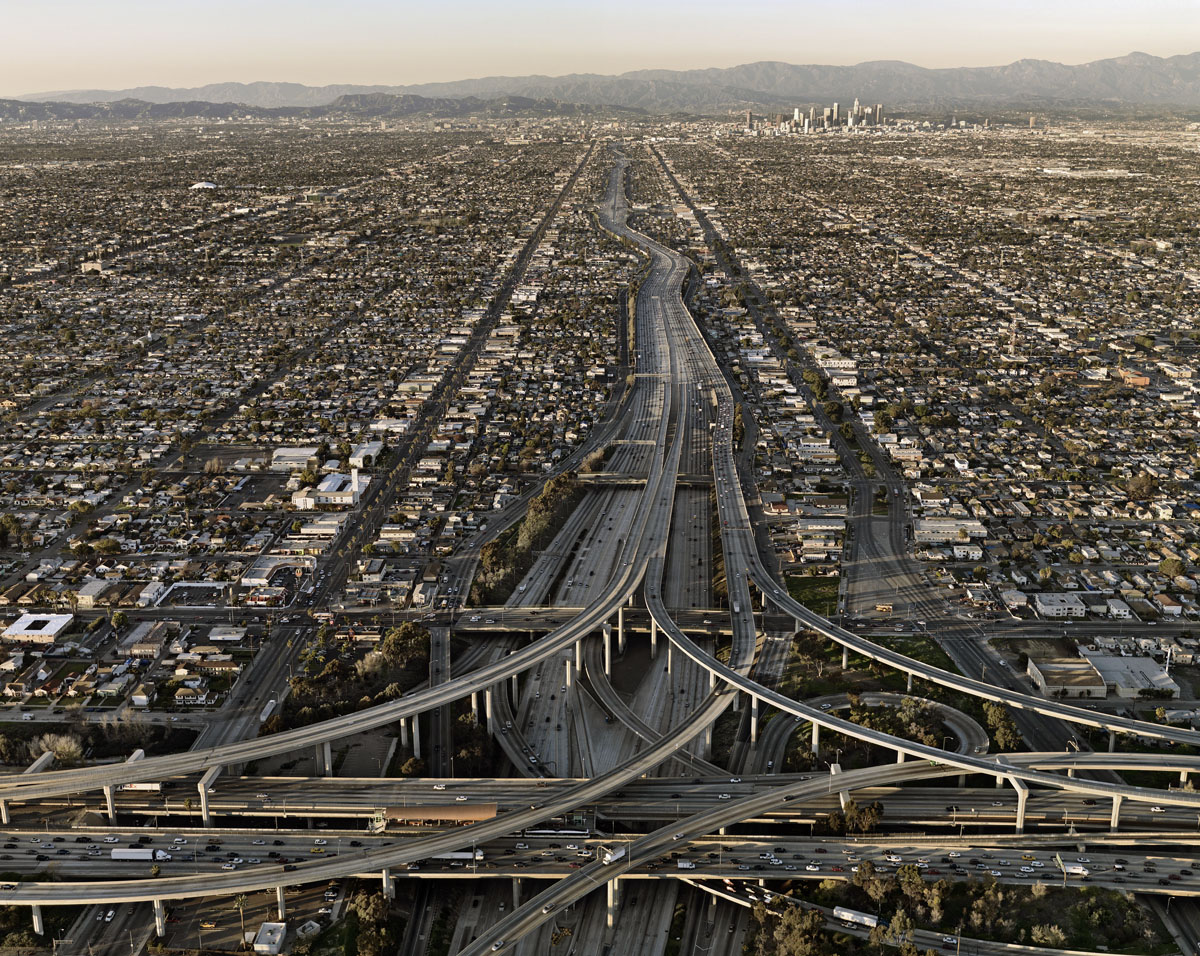 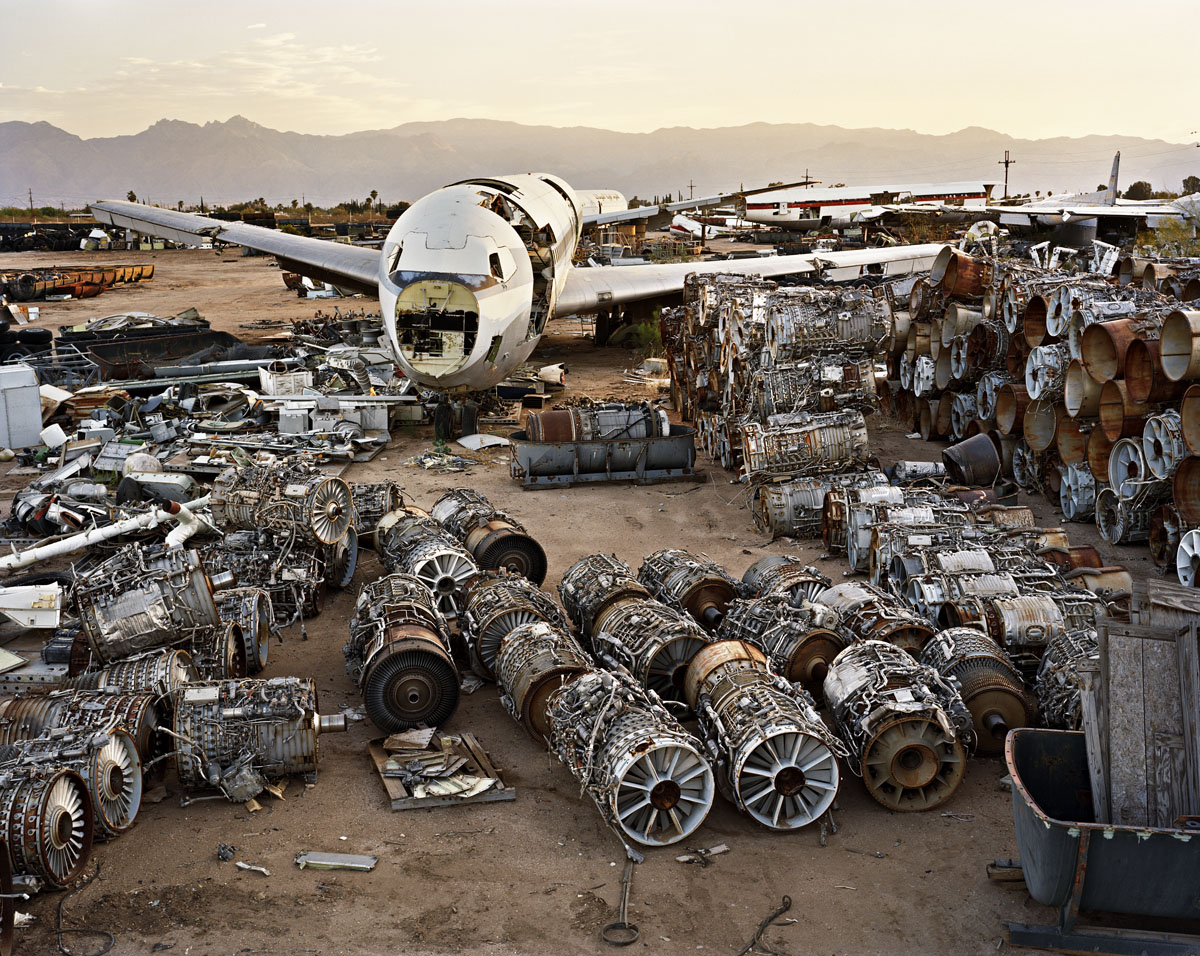 With his exhibition and publication on oil, Canadian photographer Edward Burtynsky has produced a masterpiece. On the basis of monumental and highly detailed color photographs about oil, its extraction and consumption, which Burtynsky has been making since 1997, he reveals the connection between our use of oil and the effect this has on the landscape. Within this context the relationship between the culture of oil consumption and the immense infrastructure that it requires is also firmly established. Ultimately Burtynsky’s photographs of the waste left behind by this industry inspires us to imagine how the world might look when this fossil fuel is depleted.

Oil as a visual theme

The effect of Burtynsky’s work is astounding. After more than a century of extracting oil from the planet, our eyes are being opened. Perhaps the fact that oil itself is something rarely seen has led to a lack of awareness about it. Oil does not make up part of the earth’s surface and generally remains alien to our everyday landscape. As a relatively invisible phenomenon, oil is generally a non-photographic subject, until the artist focuses his attention upon it. What Burtynsky photographs is the industry, technology and culture of oil: from the drilling sites at sea and on land, to the pipelines and network of road systems that serve distribution, to vehicles and the people who use them. By doing so he provides a great deal of visual information on a subject that is often, from an aesthetic point of view, overlooked within the world of visual art.

His stance essentially involves a similar link between industrial photography and the domain of visual art that Bernd and Hilla Becher established during the 1970s. But in comparison to the full, robust colors in Burtynsky’s work, the graphic and delicate vision and typological method of the Bechers sooner brings to mind that of an archeology of industrial heritage. Burtynsky, on the other hand, is firmly rooted in the tradition of large format classic landscape photography, where the American photographer Ansel Adams is frequently considered the main figure. Like the Bechers, Burtynsky is among those rare photographers who have worked very long and consistently on a single subject – but in his case the subject is oil.

Burtynsky is not concerned with acquiring a full view of all the oil fields. What he lays bare is not only the phenomenon of oil, but also a simple economic pattern that has enormous consequences—the extraction of a raw material, the consumption of it, and the waste that it leaves behind. As a photographer he shows us its intrinsic and aesthetic qualities through the composition, the distance that he adopts with respect to his subject (often from a high vantage point) and the strong balance with which he manages to unite conceptual with visual ideas. This is no straightforward journalistic approach. The strategy of Edward Burtynsky is simple: follow the oil. In this pursuit, his classically inspired, precise and detailed visual language is overwhelmingly effective. But the awe-inspiring quality of his photographs lies mainly in the suggestion of scale­—both within the images and in the worldwide scope of his project. The artist remains remarkably matter-of-fact in the face of all the disturbing evidence announced by this work. To him, the bottom line is, “all citizens of the world use oil—a lot of it.”

Edward Burtynsky (b. 1955) is one of Canada’s best-known photographers. His work has been exhibited in many museums and included in museum as well as private collections. Among them are the National Gallery of Canada, the Victoria and Albert Museum in London, the Reina Sofia in Madrid, the Museum of Modern Art and the Guggenheim in New York. He has been granted the TED Prize and the Outreach Award of the Arles Photography Festival. Burtynsky has received three honorary doctorates and is Officer of the Order of Canada—the country’s highest civil honour. Prior to the book Burtynsky / OIL, he produced Burtynsky — Quarries (Steidl 2007), Burtynsky — China (Steidl 2005), and Manufactured Landscapes (National Gallery of Canada, Yale University Press 2003). Representing him are six commercial galleries including: The Nicholas Metivier Gallery in Toronto and Torch Gallery, Amsterdam. For more detailed information please visit:  www.edwardburtynsky.com

The exhibition is concurrently on view at the Corcoran Gallery of Art in Washington, D.C. Senior curator Paul Roth is the main initiator of the exhibition. In this endeavor the museum received generous support from Scotiabank Group, Toronto. The presentation in Washington, in its full realization with fifty-six large-scale prints, is somewhat more extensive than that at Huis Marseille.

The photographs have been taken with various camera formats. The chromogenic prints were made at Burtynsky’s laboratory, Toronto Image Works. This condensed version of the exhibition was created specifically for Huis Marseille, and will travel to other institutions throughout Europe.