Nocturnal Scenes (As dark as light) 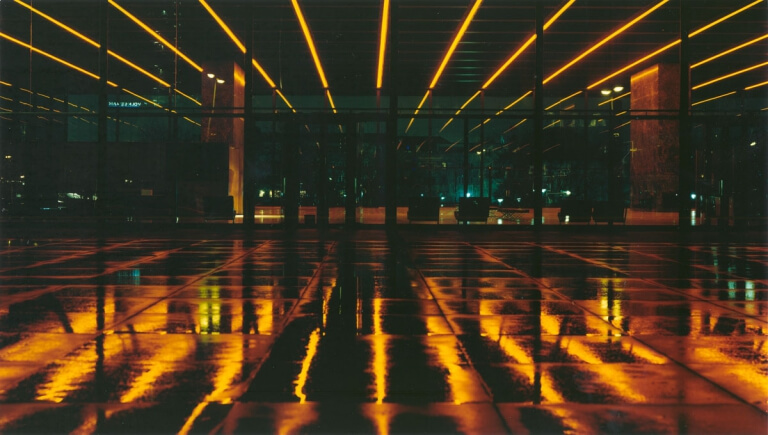 Huis Marseille is presenting here for the first time works from the latest series by German photographer Axel Hütte (1951), entitled As dark as light. Hütte has worked on this series of night time (city) landscapes since 1996. He uses the landscape theme in his work to explore the borderlines of perception. If such borderlines are to be discerned at any given time, then night is that time indeed. The elements of a landscape lose their colour in the dark. All notion of depth, height, foreground and background becomes swallowed up in the darkness, and land, sky and horizon imperceptibly merge into one another. Darkness transforms a landscape into a flat, black plane, in which artificial light makes forms distinguishable and colours visible. Hütte uses this light indirectly in his photos: here are no romantically lit castles or glaringly green sport fields, but instead night time Düsseldorf, the illumination noticeable only where the street lights have drawn wiggly little lines in the Rhine and lanterns have imparted an orange glow to the trees along the canal. London Bridge is visible only as a dark silhouette against the grey-illumined sky above London; beneath the arches of the bridge shine the pilings of the Millennium Dome, and the lighted windows of the flats in the neighbourhood form a grid of white dots. In this world of ours, so bathed in artificial light that you almost tend to forget that there is such a thing as natural nocturnal light in the form of starlight, Hütte’s photographs have given night its mystery back again. In referring to this series, he uses the word ‘dig’, not only in the sense of the word meaning  ‘to unearth’, but also in the sense of ‘to quarry for’: just as a treasurer seeker digs for gold or silver, Hütte mines the night time landscape with his camera in search of light in order to create new forms within it, for the darkness dissolves old forms, presenting new ones in their stead. At the same time, ‘dig’ gives the wink of an eye to ‘digital photography’.

In addition to photographs from the As dark as light series, Huis Marseille will also show landscapes which Axel Hütte made by daylight on his numerous voyages, such as the series London (1982-1984), Italy (1988-1992) and the recent series Continents (1998-2000). This latter series of impressive landscapes, taken in largely inhospitable regions on the five continents, was published last year by Schirmer/Mosel in Munich in conjunction with a text by that other world traveller, Cees Nooteboom. In these photographs, too, Hütte works the structure of landscapes onto the flat plane of the photograph, while at the same time playing with our expectations of the classical landscape (since the discovery of perspective in the Renaissance elevated to the norm in art): a clear foreground, mid ground and background, the whole in harmonious balance.  Hütte sooner refers to the way in which we experience a landscape when we are in it ourselves and our gaze tends to wander around from nearby to far, from high to low, rather than remaining fixed at one particular point. The monumental format of the photographs makes this experience extra powerful. At the same time, he demonstrates how the elements of landscape, whether they be natural or constructed by mankind, merge into new forms. In this he often makes use of mist, which, just as the dark of night, shrouds and transforms a landscape.