In the Full Light of Day

Unique daguerreotypes of and by the Enschedé family 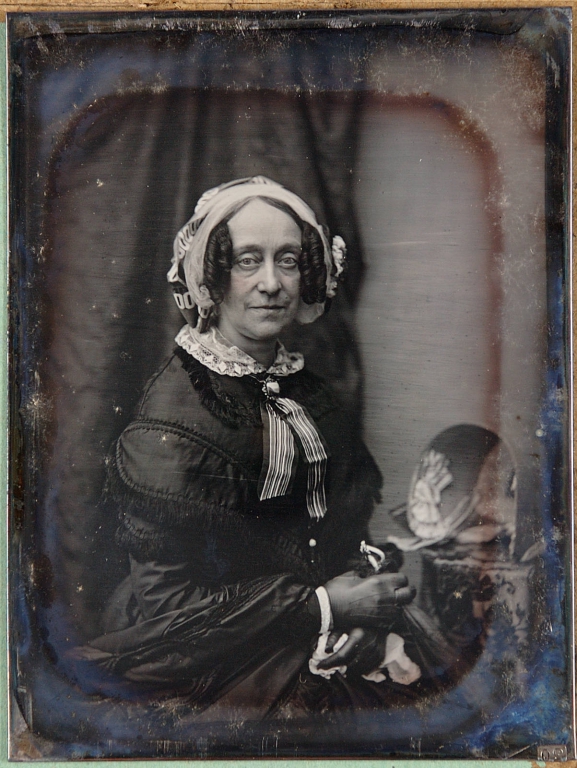 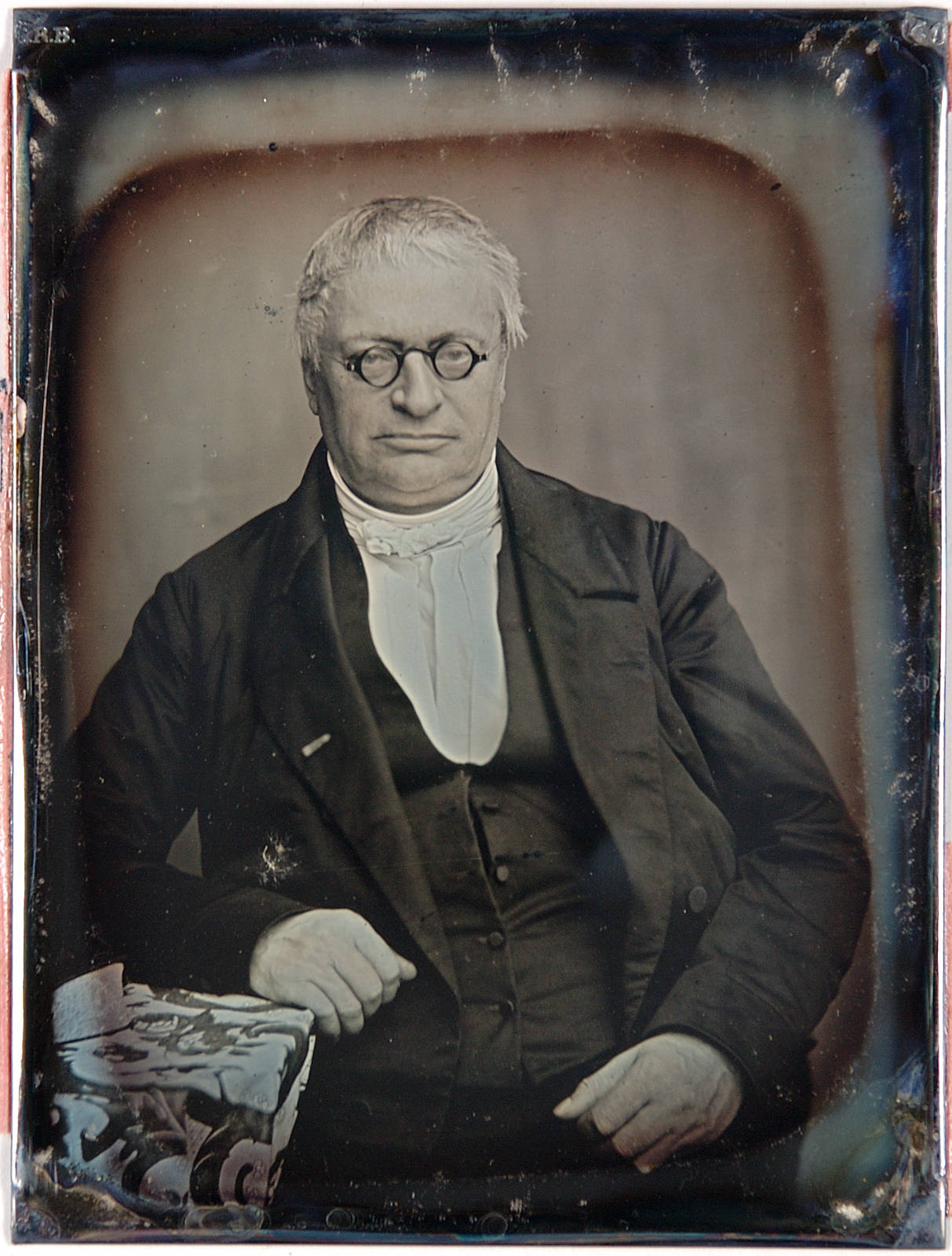 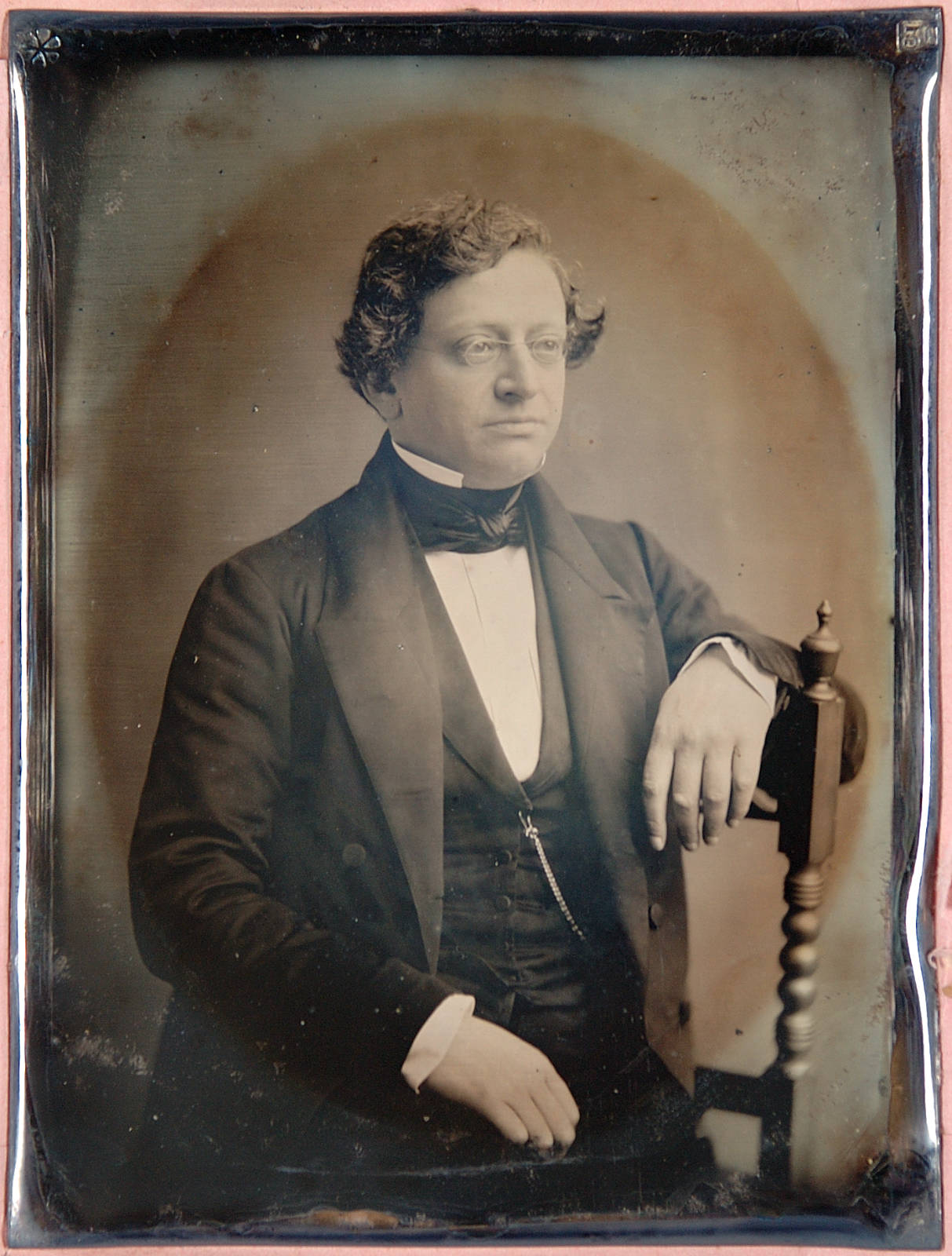 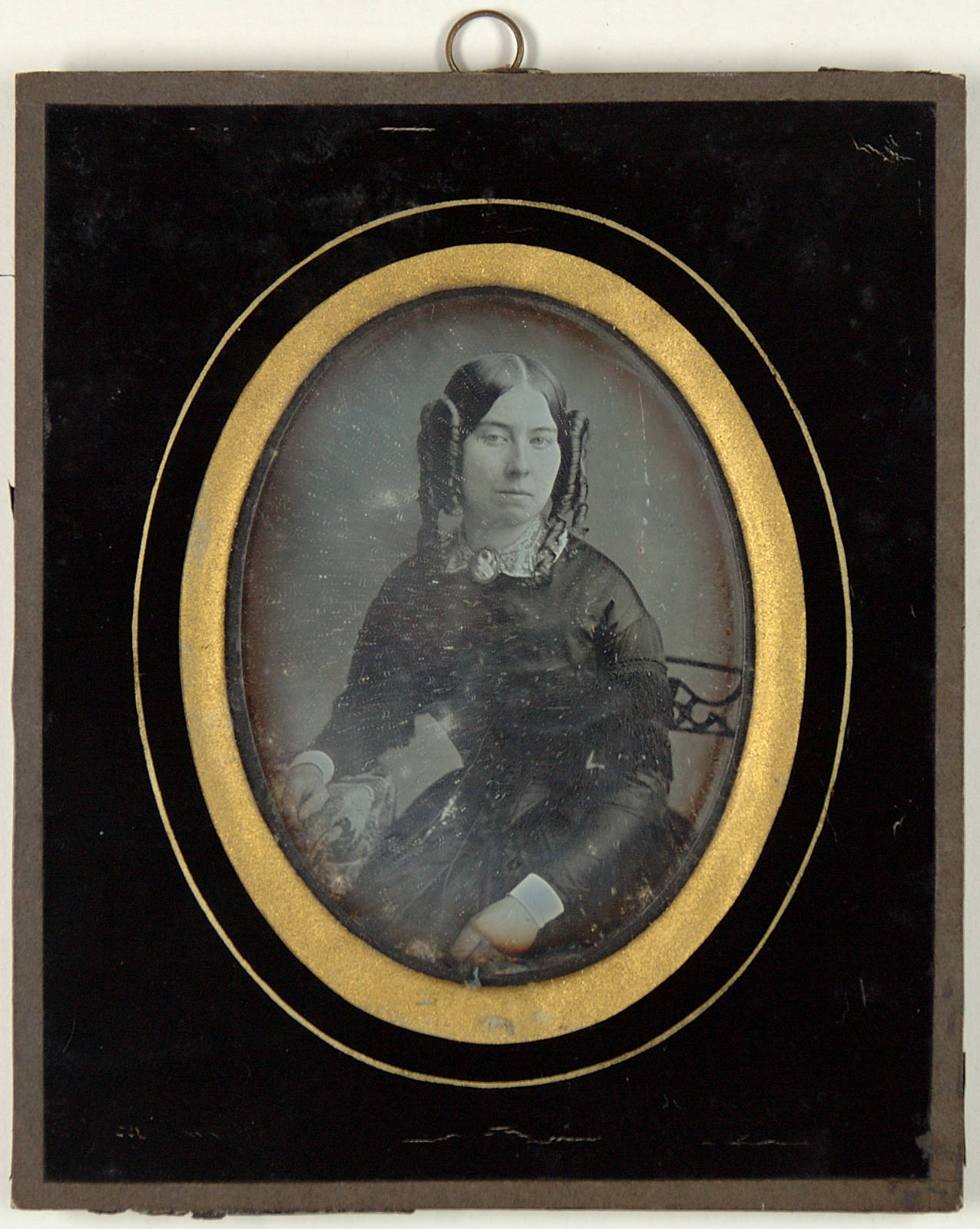 This spring Huis Marseille will proudly present a selection of roughly seventy daguerreotypes, photographic portraits of the distinguished Haarlem family of printers, the Enschedés. It is the first time that these portraits will be on view to the public.

The daguerreotypes date from the period 1839 to 1856. Among the exhibited photographs is also the very first photograph to appear in the Netherlands. This is a daguerreotype taken from a pastel portrait of Johannes Enschedé and is dated September 1839, almost immediately following the announcement of the process on August 19 of that year. In connection with this special exhibition of early family portraits at Huis Marseille, a publication will be produced. Johan de Zoete, curator of the Museum Enschedé, has written a photographic history of the family, in which the origins and development of these daguerreotypes are documented in an outstanding manner. Saskia Asser, curator of Huis Marseille, places the Dutch practice of daguerreotypy in an international perspective. Herman Maes, conservator of photographs at the Nederlands Fotomuseum, provides an account of  recent conservation work on this collection. The exhibition has been realized in close collaboration with the staff and board of Museum Enschedé. On view concurrently with this presentation of old family portraits at Huis Marseille is Dutch Households, comprising the contemporary and topical family portraits of photographer Taco Anema.

The immediate response of the Enschedés following the news of photography’s invention gives reason to assume that they recognized its importance. In any case, this new type of portraiture was so intriguing that several members of the family put it to the test and had their own portraits done. Their enthusiasm was considerable. The complicated daguerreotype process—which did involve some risk—was mastered by them, and they operated the camera themselves. Nowhere in the world have so many daguerreotypes of one family (not even a royal family) been preserved: there are precisely one hundred of the Enschedé family. This collection constitutes part of the Museum Enschedé, a thorough and well-documented archive of the family and their business. That is unusual, because most daguerreotypes in the Netherlands are anonymous, with respect to the makers as well as the subjects. Including the Enschedé portraits, 850 of these daguerreotypes are known to exist in Dutch public collections. In terms of its size, the Enschedé collection is surpassed only by that of the German daguerreotypist Adolf Schaefer, which comprises 124 daguerreotypes: these are not portraits, however, but images of Javanese antiquities and the Borobudur. (Print Collection, University of Leiden).

This process was named after the Frenchman Louis Jacques Mandé Daguerre (1787-1851). On January 9, 1839 he made the first announcement of the invention at the Academie Française des Sciences in Paris. That honor must be shared, however, with his fellow-countryman Nicéphore Nièpce and the Englishman William Henry Fox Talbot. The French government considered Daguerre’s invention so important that it purchased the rights to the method and gave notice of this on August 19 of that year. The daguerreotype differs in every respect from the photograph as we know it today. No paper and no negative, dots or pixels are involved in this medium. Here the image is directly exposed to small silver mirrors. It is (was) a sensational experience to see an original: a magical silvery reflection—almost jewel-like—which was nonetheless an astoundingly realistic depiction. This is how it was made: a silver-plated copper plate was made light-sensitive with iodine vapor, then developed with mercury vapor and ‘fixed’ by way of a saline solution. Mercury vapor is toxic, and so the production of a daguerreotype involved quite a risk to one’s health. And actually a negative image did come about, although it appears to be positive due to the reflective effect.

The many responses to this invention were conflicting. Some had infinite admiration for it, regarding photography as outright wonder. In the eyes of others, this art had a darker side as well, and destructive forces were even attributed to it. On seeing a daguerreotype for the first time, one Parisian lady remarked, “Suddenly, totally unexpectedly, overturning all that was thought to be known or even conceivable, this new invention presented itself.” The French writer Honoré de Balzac, who didn’t think much of it, commented disparagingly: “Every exposure causes a part of human nature to vanish.” Apart from these contradictions, the limitations of the technique soon became evident: reproduction was not possible; the portrait appeared in reverse, so that the image did not seem to be a ‘true likeness’; and minutes of exposure time were required to register the image. The portrait subject had to sit still for a long period, sometimes with his head in a brace. An accomplished photographer did manage to produce a livelier and natural-looking portrait, yet the majority of these had a rather formal and stiff look about them.

The first daguerreotype in the Netherlands

In 1839, at about the time of this invention, Jeanne Enschedé – Dalen is living in Paris. She writes to her brother-in-law Johannes Enschedé III, in the Netherlands, that she has sent him a daguerreotype. This is the oldest daguerreotype shown in the exhibition In the Full Light of Day. It is a photographic reproduction of a pastel portrait of Johannes Enschedé III. This daguerreotype arrives on October 4, since that is when records show his payment for its delivery. On October 13 he writes a letter to Jeanne, thanking her. Although this may not be the most beautiful portrait on view, in historical terms it is the most spectacular daguerreotype in the exhibition.

News of the invention reaches the Netherlands on January 13, 1839: four days after the announcement in Paris. The Opregte Haarlemse Courant immediately reports: “The means have been found to raise sunlight itself to the rank of an artist, and to reduce faithful depictions of nature to only a few minutes’ work.” The Enschedé family, publisher of this newspaper, had been the owner of the printing firm and publishing house Joh. Enschedé & Sons since 1703. Therefore, the Enschedés were not only among the first to practice and propagate daguerreotypy in the Netherlands; they were also responsible for conveying the first news of this to the country. In the Full Light of Day allows us to see, through the collection established by the Enschedé family, how this genre developed in the Netherlands from 1839 to 1855. The exhibition includes various portraits by renowned photographers such as F.W. Deutmann, A. Daru and Th. Hutchinson. These beautifully illustrate how they were able to achieve superior results with limited means. Lesser examples made by anonymous photographers are also on view. Between 1850 and 1855 studio props begin to emerge as well. By this time the photographer no longer works from various locations throughout the country, but sets up his studio at a fixed location. The presence of tables, chairs, curtains and background scenery makes it possible to determine which studio produced a daguerreotype when it has been left unsigned. But at that point the daguerreotype is in its final phase.

In April 1931 the photographer Dr. Erich Salomon gave a lecture on his work titled Mit Frack und Linse durch Politik und Gesellschaft (With Tuxedo and Camera through Politics and Society) at Hotel Kaiserhof (Berlin). Among the 400 guests were many high-level German political, industrial and academic officials, who now saw themselves in life-size projections. Those projections were accompanied by the incisive commentary of the photographer himself, who explained how he had made their portraits without being noticed. The lecture became the starting point for his book Berühmte Zeitgenossen in unbewachte Augenblicken, published that same year.

Both the text of Salomon’s lecture at Hotel Kaiserhof and the majority of the glass slides that he used for this withstood the war and are now in the Salomon Archive of the Berlinische Galerie. In 2001 Huis Marseille commissioned the reconstruction of Salomon’s historic lecture. This was carried out by the photographers Hans Samsom and Ewan Baan, in collaboration with Peter and Trudy Hunter, the Berlinische Galerie and Laura Samsom-Rous. The Dutch text is read by writer and former diplomat F. Springer, the English text by filmmaker Keith Washington. This projection will now be shown again in connection with the daguerreotype portraits of the Enschedé family and Taco Anema’s Dutch Households.

Trudy Hunter recently donated a very beautiful series of seven photographs by her father-in-law Dr. Erich Salomon to Huis Marseille. Salomon had made the portraits of conductor Bruno Walter (1876 – 1962) around 1930, presumably during a concert at Covent Garden, London. This series of photographs will also be on display with the projection.

Thanks to support from the Mondriaan Foundation, all of the exhibited daguerreotypes have undergone conservation at the photography conservation studio of the Nederlands Fotomuseum in Rotterdam, under the direction of Herman Maes.

The book accompanying the exhibition

The book In het volle zonlicht, to be published in connection with this exhibition, contains texts by Johan de Zoete (curator of Museum Enschedé), Saskia Asser (curator at Huis Marseille) and Herman Maes (conservator of photographs, Nederlands Fotomuseum). The account of the family’s photographic history given by Johan de Zoete is an exploration of the way in which the Enschedés embraced the daguerreotype and brought photography to the Netherlands almost by coincidence. An astoundingly close look at the nineteenth century! In het volle zonlicht. De daguerreotypieën van het Museum Enschedé te Haarlem. Gottmer Publishers Group and Koninklijke Joh. Enschedé, Haarlem, 2009.

Daguerreotypes in Rotterdam and The Hague

On the opening day of In the Full Light of Day, Saturday 7 March, the Nederlands Fotomuseum Rotterdam will be launching a website listing the majority of all collections in which daguerreotypes are present.

In addition to this database www.daguerreobase.org the website www.nederlandsfotomuseum.nl also contains a section on this process under the heading ‘ontdekken’ (discover).