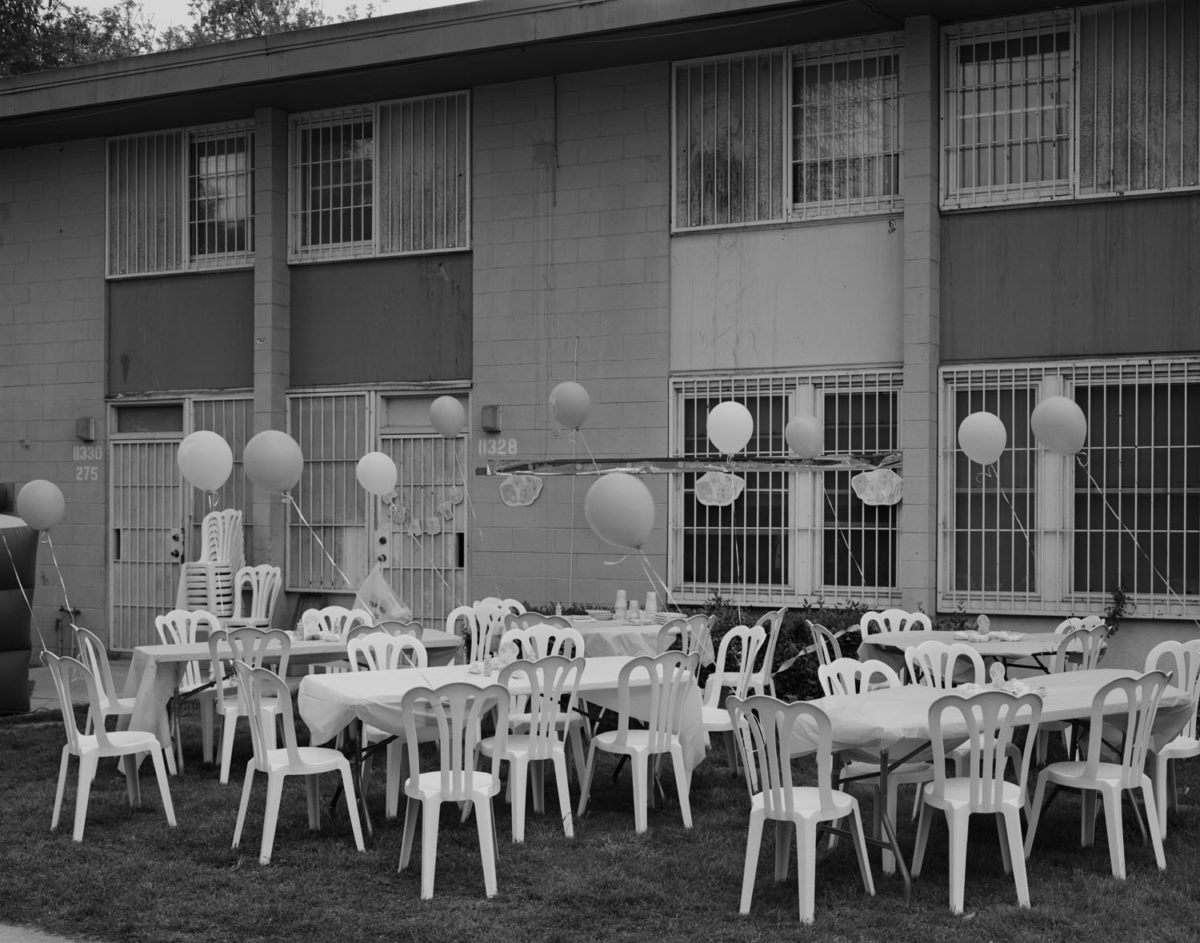 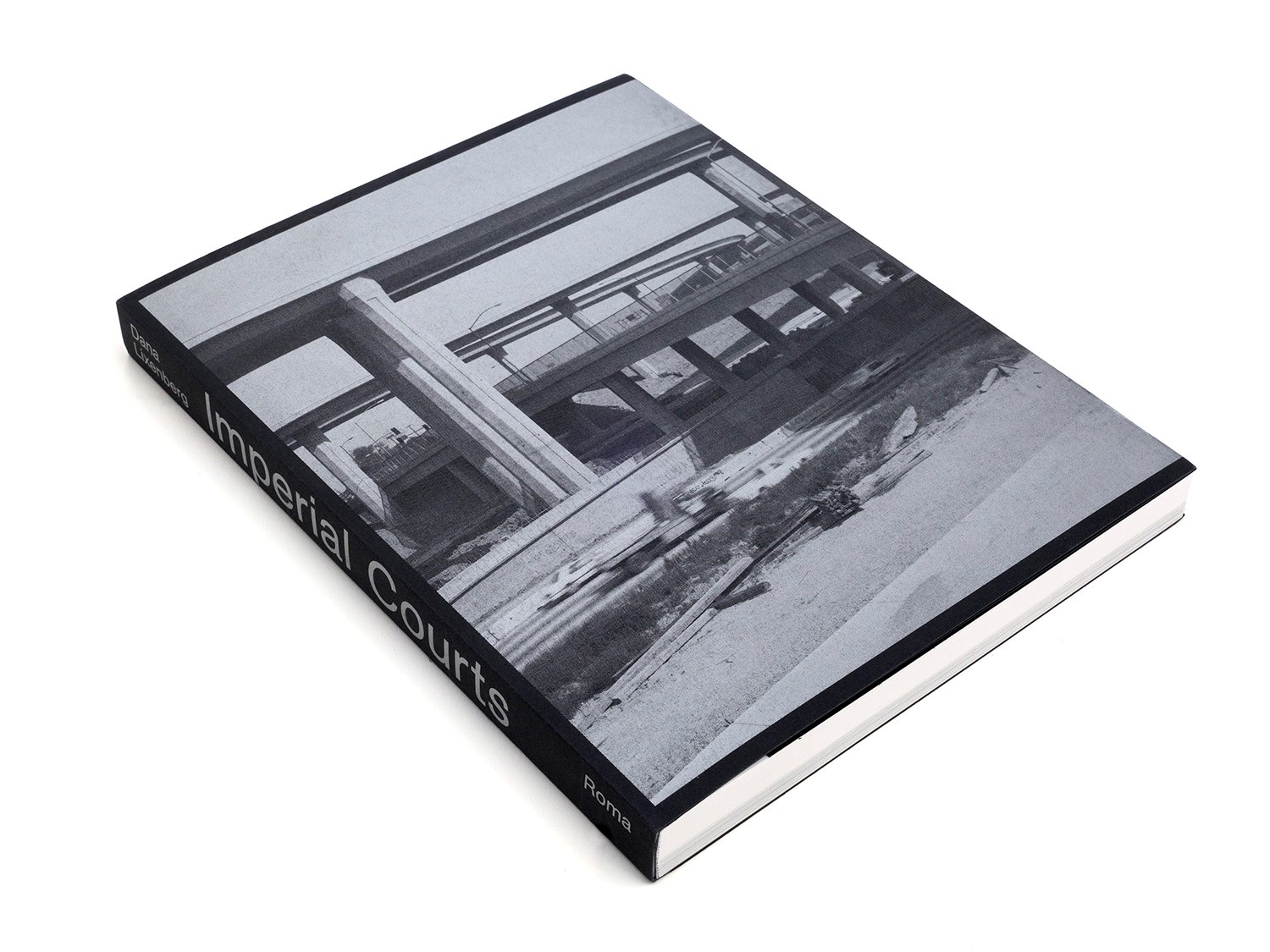 The Huis Marseille exhibition Imperial Courts, 1993–2015 displays for the first time the entirety of the work of photographer Dana Lixenberg made in the neighbourhood of Los Angeles from which it takes its name over the last twenty-two years. Through her photography, video, and audio works, Lixenberg offers us an intimate glimpse into the everyday life of this troubled area and its residents.

In 1944, as part of a large-scale public housing project, 498 single-family houses were built in Watts, a district of Los Angeles. During the 1950s, most of the people housed there were African-Americans from the Southern States. Imperial Courts, together with the surrounding districts, soon became a black ghetto. In 1965, rising anger at social injustice resulted in the notorious Watts rebellion and race rioting. In 1992, riots again broke out after four LAPD police officers were acquitted of the brutal beating of Rodney King, a black taxi driver. The same streets were also the battleground of a bloody conflict between two gangs, the Crips and the Bloods, until they agreed on a truce in 1993.

‘You want to put some niggas on display? Hahaha,’ was Tony Bogard’s reaction, leader of the PJ Watts Crips gang when Dana Lixenberg first met him in 1993, at the height of racial tensions in Los Angeles. Apart from the media, no one ever visited South Central Los Angeles, let alone the ‘projects’. Lixenberg was at first regarded with suspicion. The community was fed up with media attention and the negative stereotypes that came with it. But Lixenberg was persistent, and was eventually granted the approval of Tony Bogard, who would later play a crucial role in negotiating a truce between the Crips and the Bloods. During the month that followed, Lixenberg gradually won the trust of the residents of Imperial Courts.

Using a large-format camera mounted on a tripod, she portrayed them in black and white with only natural light. She intentionally photographed her subjects against neutral backgrounds, rather than locations loaded with meaning, such as graffiti-filled walls, and she kept references to gang culture out of her images. In so doing, according to the former director of photography at Vibe magazine, in which her work was first published in 1993, she created ‘a moving yet shrewdly quiet range of pictures that afforded her subjects the pleasure of being themselves as compelling individuals […] despite their monolithic, emotionally reserved surfaces, her casts of subjects surge throughout this dazzling series with a collective cool and an unfussy sense of elegance that imbues these men, women and children with quiet fire and vivid sense of style and self.’ (George Pitts, Hotshoe magazine, 2013) Tony Bogard was the last person Lixenberg photographed in this first period in 1993. He was shot dead in 1994.

Lixenberg remained in contact with the community and continued her work in Imperial Courts between 2008 and 2015. She has now added group portraits and landscapes to her individual portraits, and also made audio and video recordings; a new development in her artistic practice. These filmed scenes are observational and tranquil, capturing the people, their surroundings, and the daily rhythm of the neighbourhood. The very ordinariness of these scenes gives them a somewhat surreal and alienating quality, but the viewer is always subtly aware of the tension that hovers just below the surface in a neighbourhood such as this one.

Imperial Courts is the core project of Lixenberg’s oeuvre and life. ‘After twenty-two years, I have reached a point where I just can’t imagine not being here, not having Imperial Courts in my life, not knowing the people I’ve met here over the years,’ she writes in the afterword to the accompanying book.

Huis Marseille exhibition
The exhibition Imperial Courts, 1993–2015 displays the impressive results of this life’s work. A selection of 50 portraits and landscapes, on baryta paper – some of them in monumental format – is on display. A triple-screen video installation immerses the viewer in the community for 70 minutes, and an audio installation reveals the reactions of Imperial Courts residents to Lixenberg’s work.

Book
The exhibition is accompanied by a new book, Imperial Courts, 1993-2015, designed by Roger Willems and published by Roma Publications. The book has been shortlisted for the Photobook of the Year Award by Paris Photo and the Aperture Foundation. Language: English, 296 pp., black and white, 24×31 cm, paperback. ISBN 9789491843426.

Web documentary
Working closely with documentarian Eefje Blankevoort and interactive designer Sara Kolster, Lixenberg has also created a web documentary, Imperial Courts. It has been selected for the IDFA Doclab and will be premiered on Thursday, 18 November 2015, during the International Documentary Film Festival Amsterdam (IDFA). www.imperialcourtsproject.com

Dana Lixenberg
Dana Lixenberg (1964, Amsterdam) lives and works in New York and Amsterdam. She studied photography at the London College of Printing (1984–1986) and at the Gerrit Rietveld Academy in Amsterdam (1987–1989). She has gained international fame through her work for publications such as Newsweek, Vibe, New York Times Magazine, The New Yorker and Rolling Stone. Lixenberg pursues long-term projects, with a primary focus on individuals and communities on the margins of society. Her books include Jeffersonville, Indiana (2005), The Last Days of Shishmaref (2008), Set Amsterdam (2011) and De Burgemeester/The Mayor (2011). Her work has been widely exhibited and can be found in both national and international collections worldwide.

This exhibition has been selected by We Are Public and is free for their members from Tuesday 15 December till Sunday 20 December.